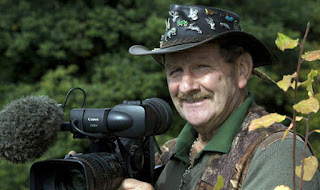 It is by a cruel twist of fate that Johnny, who has died, as a result of a digger accident on his farm, at the age of 79, should have been brought to a life of wildlife observation 47 years ago while he was convalescing from another serious accident involving agricultural machinery.

Johnny was born the son of Joyce and Walter in a terraced house without either running water or an inside toilet in the tiny village of High Bray, North Devon on February 23 1939. It was seven months before the outbreak of the Second World War broke and a ridge of high pressure was feeding bitterly cold air across the moor fed by an easterly wind.

He was brought up, the only boy among five sisters, living barely above poverty on the wage of his father who worked on ten hour shifts as the 'powder monkey' in the local Notts Quarry, mining sandstone. It was a responsible and potentially dangerous job which meant that he carried powder or other explosives to the quarry's blaster and assisted by placing prepared explosive in a hole and connected the lead wire to a blasting machine. Johnny recalled : He was called 'the Cat because he was so surefooted and very fit. To lay charges, he didn't use ladders; he climbed, he leapt from ledge to ledge on the rock face. The Cat never fell.' Apparently, his reflexes were so fast he could scoop up two hiding rats in one hand.

With so many mouths to feed it was important that Johnny and his siblings were taught to supplement the family diet by learning to forage and hunt from an early age and he recalled childhood days picking whortleberries and tickling trout in the local river. He became a skilled tracker, poaching for  rabbits and salmon from the River Bray and recalled : "My Dad used to take me out, I was only 13-14, down to the river and used to take the salmon from the river. My Dad used to say : 'Well if the salmon comes up from the sea, it's good enough for anybody.' " In addition, he made money by trapping moles, badgers, foxes and weasels to sell their skins for fur.

Johnny recalled : 'I went to school of course, but the teachers were not always best pleased to see me there. I swore a lot,I played truant, I answered back. I was out to make my friends and classmates laugh; that was the whole point of school for me and good fun it was too, at times.'

Having left South Moulton Secondary School at the age of 15 in 1954 Johnny worked as a farm labourer before, at the age of 17, moving to work at Notts Quarry where the dangers were underlined when he 'was ripping stones out and I went down with a bunch of them, falling 50 feet down a 75 degree slope. One of the boulders that fell with me landed on the inside of my ankle and cut the artery.'

At the age of 20 in 1959, he was called up for 19 months national service and served in the Army Regimental Police based in Hong Kong. Returning home, he lived at Brayford a further 2 years before, at the age of 24, he left home after marrying his childhood sweetheart, Julie, and settled down 12 miles outside the Moor in the village of Bishops Nympton.

He worked as a quarryman and like his father, as a powder monkey and at the age of 32 in 1971, Johnny was working a lumberjack when he had a fearful accident which changed his life. He recalled : "I was a timber feller and I'd done dangerous trees with a tractor. I was driving a winch tractor and reversing back with the anchor off the ground and a chain broke and the hydraulic arm flyed through the back of the cab and hit me smack in the face and give me four fractures."

In fact, as Johnny confessed : "It broke the bone above my eye, the bottom of my jaw and my front teeth. If that blow had hit my nose, just a couple of inches to the left, it would have pushed into my brain and I'd have been killed."

Knocked out, he came to with a vague feeling that someone had given him a good hiding. Covered in blood and with his right eye completely closed, he managed to climb into his pick-up truck and steer it along the lonely track to the main road. Somehow he drove himself home. He was rushed to hospital : "The doctor said I was like a vehicle in a crash-repair shop - and it took him a long time to fix me. I went all to pieces."

"I was under the doctor a fair while and I didn't know what to do with meself. I wanted to go back on the timber again but I'd lost me nerve. I went all to pieces and so they gave me tablets to take and I got into the wild life and it seemed to take the pressure from me. Me mate let me use his video camera one day and this started me off. I'd always loved seeing wild life, but as soon as soon as I'd bought that video camera, I just kept going nearly every day."

It was an apocryphal moment : “Something in me came back to life. I’d started to look up again at what was around, what was happening in nature. Now I wanted to take home my prey not in the back of the van, bloodied and ready for the butcher, but on videotape, so that it might be seen over and over, and give pleasure to myself and others. Suddenly I felt excited to be alive.”

Armed with the skills and knowledge of a countryman and the help of his inexpensive Sony Handicam 8mm home video camera, he recorded the wildlife on his Exmoor  doorstep and captured scenes of sensitivity in English wildlife, some of which hadn't been recorded before. What started as hobby, with Johnny showing his VHS videos at the village hall, blossomed into a modest business called 'JFK Films'  and over time he made 28 films.

Johnny was 'discovered' when Daily Telegraph correspondent Willy Poole turned up at his stall at Honiton and bought one of wildlife compilations and the "Next thing I knew my story was in the paper and he called my film a masterpiece. That’s how it all started.”

Johnny recalled he was 53 when : "My first work as a wildlife presenter was for Yorkshire Television in 1992 (broadcast in November 1993). It came about after a journalist for the Daily Telegraph bought one of my first DVDs while he was down in Devon on holiday. He wrote an article in the paper calling it a ‘masterpiece,’ I still feel flattered, and I was immediately approached by Yorkshire Television to make a film about my life on Exmoor."

National fame and recognition came when his 2006 10, part series 'Johnny Kingdom: A Year on Exmoor' was shown on BBC Two  The series coincided with the publication of his autobiography, 'Johnny Kingdom - A Wild Life on Exmoor.' He followed this with one-off programmes featuring visits to Lapland and to the Scottish Highlands and a new BBC series, 'Johnny's New Kingdom' in 2008. Finally, In 2015, at the age of 76, he presented a 4-part series for ITV called 'Johnny Kingdom's Wild Exmoor'. As a result, Johnny's new wealth allowed him to buy 55 acres of land on Exmoor, which he set out to make it a haven for as much local wildlife as possible.

Climbing to see a buzzard's nest

Dunlin from the floating hide

Stags in the heather

His television agency, 'Hilary Knight,' paid tribute to Johnny saying : “ We have lost one of the last true characters of rural Britain. Johnny Kingdom embodied all the attributes that are associated with true countrymen. Born and bred an Exmoor man through-and-through he loved his Devon patch and all the flora and fauna within. He lit up our TV screens with his enthusiasm and passion. He became a very proficient photographer and cameraman and his work became very sought after. The various Devon shows, and in particular South Molton Market, will be a sadder place without his cheery presence. He will be sadly missed.”

"You wouldn't have a prettier place than Exmoor.You don't have to be rich to enjoy life and I say that's the secret of happiness."