More and more old men and women growing old and living longer is a phenomenon across Britain but it is only 'Age Scotland' which has highlighted the need for more accessible, age-friendly homes which would let old people live independently as long as possible. 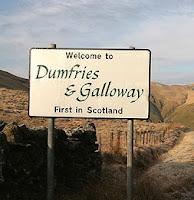 Dumfries and Galloway in Scotland with its ageing population and smaller-scale towns and villages wants to become a testing ground for intergenerational living allowing older people to play an active part in the community and in the belief that everyone involved could benefit, both young and old.

'Architecture and Design Scotland' has done a lot of work on how better intergenerational living might work and experts from across the country gathered at an event at the Easterbrook Hall in Dumfries recently to discuss the subject under the title of 'Intergenerational Housing and Age Friendly Places.' This location was chosen because the 'Dumfries and Galloway Care Campus Project,' backed by the Crichton Trust, is looking at ways to make the region 'a great place to grow old.'

The Trust's Chief Executive, Gwilym Gibbons said : "It is an important subject for all of us because clearly we are all ageing. Rural areas are ageing faster than other other areas. So here at the Crichton Trust we are trying to imagine what the world looks like in 15 to 20 years time with a significant proportion of the population being over 65. That means developing homes with the technology to help people in later life , while also seeing older people as a key asset in terms of experience and knowledge."

Steve Malone, Principal Architect with Architecture and Design Scotland, said the aim was to create places where people from all generations could live together and in particular town centres. He said : "In a nutshell, that's looking at the benefits and the barriers to town centres as places to live, in particular for the ageing demographic." This included studying housing types, their locations and also and with equal importance, the spaces between the buildings.

Amanda Britain, who chaired the event in Dumfries, said that getting it right could have huge benefits and the spaces between buildings and other facilities are all part of creating good places to grow old : "We have a growing number of older people and so we're all living longer. We have challenges with that, you know that this is not all bad. Older people contribute massively to the economy and to society." She made the point that one goal of intergenerational housing is to ensure that people have a good quality of life and retain social connections for as long as possible and studies had shown that both young and old benefited from greater interaction with one another.

"The reality of Dumfries and Galloway is important here because it means that we can test ideas and solutions and think of new ways of providing care and support for individuals that then can either be replicated or scaled into other environments, into cities. So it's about Dumfries and Galloway absolutely leading the way on what future care looks like, what living looks like in later life. That's about supporting people to stay cultural, economically and socially active as long as possible and as healthily as possible."

Unfortunately, a key ingredient of the success of the project is a healthy number of young
people and young people in Dumfies and Galloway are getting thinner and thinner on the ground. A survey of 10,000 young people carried out as part of the 'Year of Young People in 2018 found that 55% of those questioned said they intended to leave the region in the future.

Councillor Adam Wilson said the outcome of the 10,000 Voices consultation was a real concern and he believes they need to do more to make the region attractive for young people and highlighted recruitment problems in the public and private sectors – with both struggling to hire people. He said : “I think there is a warning shot because if a number of young people leave and do not come back we will see a number of crises across our region. We are going to have a huge demand on social care over the next decade and beyond. We have that warning shot today and we can start to take meaningful action to address that. If we do not keep our young people here, or attract young people to stay here and to grow their families and to work, we are going to face these difficulties. There are a lot of ways in which we can try to grow our economy but make sure that we deliver for our young people.”
Posted by ...............................JohnBoy at 08:30