A huge roar greeted the surprise appearance of the 93 year old David Attenborough at the Glastonbury Rock Festival yesterday. He took to the stage in the afternoon to the sound of whale noises being played out on the speakers. When he thanked the crowd for reducing plastic waste at the festival he said : "This great festival has gone plastic free. That is more than a million bottle of water that have not been drunk by you in plastic. Thank you! Thank you!'


He told the audience the sea creature noises were from Blue Planet 2. “There was one sequence that everyone seems to remember, that showed what plastic has done to the creatures in the ocean. It has an extraordinary effect.”
https://www.youtube.com/watch?v=0a8HGJid-Jo

Emily Eavis the festival co-organiser tweeted : 'David Attenborough live on the Pyramid. What a moment.'

Adrian Lake from Henley, said his appearance had brought a tear to his eyes : “He’s such an iconic figure, David Attenborough is the voice of the world’s creatures and we need to join him in being that voice also.” 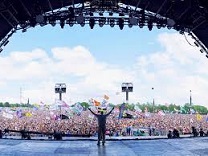 Ian Simmons said : “He’s just a legend. It’s just amazing to see him and all the young people taking notice of him. The way Glastonbury has done the plastic-free thing has been amazing. When you look around you hardly see any plastic, which is what we have to do, obviously.”

Georgia Spence said : “My friends weren’t going to come to the Pyramid stage, but when they heard Attenborough was speaking, they changed their minds. He’s looking out for the people of the future.”