Britain, assailed by Covid-19, is a country where old men with undiagnosed cancer have a champion in Professor Karol Sikora

Page views : 306
Last week 'The Times' reported the case of John Anderson, who is 72 and has watched with frustration as his brother Alan’s condition worsens due to a lack of proper treatment. He said : “He has battled bladder cancer for the past 18 months or so and was well into his treatment” when his programme fell apart when the Covid-19 lockdown started. Alan went into a hospice in Luton eight weeks ago. Of course, he was very ill, but we know he would have had a chance. Now he is under palliative care and very, very ill. He is in excruciating pain as the cancer is now in his spine. The doctors have told him there’s nothing more they can do. We think if he’d got the treatment when he should have then it might have extended his life. My view of the NHS is, at this time, not the same as all the ‘clappers’. I am watching my brother in pain.”

I had a bladder cancer diagnosis four years ago and underwent a course of chemotherapy before my bladder was removed in five and a half hour surgery, along with my appendix, prostate and a dozen lymph nodes. I think that if the Covid-19 Pandemic had struck 4 years ago and my surgery had been postponed, I like Alan, would have been in a hospice, receiving palliative care and very, very ill.

Karol Sikora is a 72 year old Professor specialising in Cancer Medicine, who was a former head of the World Health Organisation’s Cancer Programme and has become the country’s most prominent critic of the impact of the Covid-19 Lockdown’s impact on National Health Service care for other diseases and in particular, cancer. He has gone on record as saying : “Some estimates say a few thousand cancer patient lives could be lost. I think you can easily multiply that by ten. It’s far worse than people appreciate.”

He uses the fact that studies suggest that more than a decade of progress in saving lives will be wiped out this year. “We have almost certainly caused the death of something like 30,000 patients. I think it’s going to end up in that sort of number. 30,000 who would have probably been cured if it hadn’t been for Covid. I’ve seen a lot in my half a century in medicine. I’ve never been more worried about cancer care than I am now. This is an unfolding disaster and so many aren’t seeing it.” His advice is :  “Don’t get cancer in 2020.”

In Britain at the moment, cancer is responsible for the deaths of 88,000 men and 77,000 women every year. Prostate cancer is both unique to men and the most common cancer in men, with 48,600 new cases diagnosed in 2017. In fact, about 35% of all new prostate cancer cases in the Britain are diagnosed in old men aged 75 and over and it kills 11,700 men every year, the equivalent of 32 every day.

In recent years, an attempt to reduce prostate cancer deaths has led to increased publicity aimed at getting men to seek an early diagnosis. The Covid-19 pandemic has now seen that progress grind to a halt, not the least because many men have avoided visiting their GPs with a fear of being sent to Covid- laden hospitals for treatment.
http://britainisnocountryforoldmen.blogspot.com/2018/02/britain-is-no-country-for-old-men-with.html

Karol admits that he underestimated the seriousness of Covid-19 early on. Now official statistics are proving that one central message was correct : The virus has been a disaster for cancer care and 250,000 children, young people and middle-aged and older men and women, who would normally have been urgently referred by their GP to a cancer specialist are missing from the diagnostic pipeline. This, he points out, is the tip of the iceberg, because millions more have either missed routine screening appointments, or are waiting for diagnostic tests and treatments and as a result, survival rates are poised to sink.

He believes Britain’s cancer diagnosis and treatment pipeline was already fragile and underfunded and Covid-19 policies have effectively severed it. Patients who should have gone to their GP with suspicious lumps, or blood in their stool or persistent coughs, which is a symptom of Covid-19 but also of lung cancer. Instead they were told to :

He said GPs : “shut up shop” and directed patients to NHS 111, which is no good for those with conditions such as pancreatic cancer, which typically requires more than four GP visits before a referral. In addition, hospitals closed diagnostic services, postponed treatments and hunkered down for the Covid-19 storm to pass.

He said : “I’ve seen patients with colon cancer that almost certainly would have been 'Stage One' at the beginning of this.” The disease was missed and he now suspects that they have progressed to 'Stage Three'. The key to successful cancer treatment is to find the tumours early : “Early colon cancer - 90% chance of cure. 'Stage three', when the lymph nodes are involved, high up in the abdomen, then the chances of cure are less than 20%”.

As the pandemic approached in February and March, Government Ministers and officials promised that cancer services would be unaffected, but those pledges clearly were not met. A study last week from the Institute for Public Policy Research (IPPR) and the healthcare management consultancy 'Carnall Farrar' entitled : 'The hidden cost of Covid-19 on the NHS - and how to ‘build back better’' shone a light on how :

* more than a quarter of a million urgent cancer GP referrals were missed between April and June.
* about 7% of those people will have cancer.
* these GP referrals account for about a quarter of the cases that are spotted.
* outpatient referrals account for about a fifth and are also sharply down.
* another fifth come from patients whose cancers are spotted after they go to A&E departments, which were often quiet during lockdown.

In April a report by NHS Providers, which represents hospital bosses, said that some oncology departments had seen an 85% reduction in referrals. Patients already in the treatment pipeline have also faced disruptions. Operations have been postponed to avoid those with weakened immune systems braving hospitals that may be Covid-19 hotspots. Intensive care units were set aside for virus patients.

Karol believes that what is needed now is an urgent shift in focus : “The Government is throwing everything at a potential second wave of Covid. What about the cancer disaster that is already unfolding?” The emphasis, he said, must be on getting the NHS’s diagnostic pathways fully open :  "That means getting rid of the backlog - the only way through is to extend the working day in diagnostic departments. So, the same way we did with Covid, we’ve got to get the same drive, the same incentives for staff to actually turn out more CT scans, more MRIs, more bronchoscopies, more endoscopies - all that stuff has to be at much greater speed.”

These departments he said : “tend to shut at five o’clock and tend to not open at weekends. We’ve got all this expensive equipment just sitting there for two days idle. That the staff won’t come in - that’s the excuse. Well, pay them to come in and work out how we can do it with less staff. Certainly you don’t need to have very highly skilled people in at the weekend; you don’t need to have any decision making. You just do the scan and read it later.” 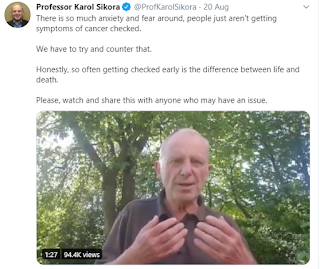 Karol joined Twitter in March and recalled :  “We were just going into Covid. I was having a drink with a colleague who’s a retired oncologist who’d been on Twitter for ten years and he’d got 117 followers. He said : "You could do Twitter to get your message over - what’s your message Karol?" And I said : "The message is that cancer is going to be bigger as a killer than Covid if we go down the route of shutting everything down. If we do that, there are going to be more cancer deaths than Covid deaths’.”"

Karol is using Twitter to urge anybody with warning signs to see their GP and last week posted :

“Forget the rest of my tweets, these are by far the most important. So many times we’ve been unable to help because the cancer wasn’t caught early enough. Unusual lumps. Abdominal pain. Blood in poo/urine. Unexplained weight loss. Any persistent symptoms. Please get checked!”


Val Curtis :  I'm one of the thousands of extra cancer deaths we'll see this year
https://www.theguardian.com/commentisfree/2020/jul/16/extra-cancer-deaths-this-year-covid19-nhs-health