Britain is still a country for an old soldier called John Hutchin, whose awe-inspiring courage should be an example to us all 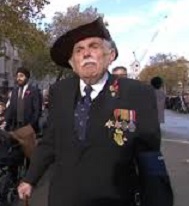 Earlier this week, just ahead of the 75th 'VJ' Commemoration of the end of the Second World War against Japan, BBC TV News showed an interview with 96 year old John Hutchin

In 1944 Private John Hutchin was a 20 year old soldier from Newport, a member of the South Staffordshire Regiment who volunteered for service in 'The Chindits', special force Army units which drew their name from a mythical

Burmese lion that appeared on their badge and were led by the charismatic Major-General Orde  Wingate. John is one of the few men still alive who served in the brutal Burma (Myanmar) Campaign.

His battalion, led by Brigadier 'Mad' Mike Calvert, were part of 'Operation Thursday', the code name given to the airborne invasion phase of the campaign. The aim was to fly in a force of 10,000 men, 1,000 mules, equipment and supplies into clearings in the heart of Burma behind enemy lines. This type of operation had never been attempted before. Three sites were selected for the initial landing grounds and were given the code names Piccadilly, Broadway and Chowringhee, named after famous roads in London, New York and Calcutta. These landing sites had been chosen in inaccessible areas to avoid contact with Japanese ground troops and all sorties were to be flown at night to avoid Japanese aircrafts.

Before he was dropped in the jungle, John's Chindit training had demanded extreme

fitness and novel combat skills. It focused on march discipline, jungle drills for moving in and out of bivouac, dispersal, compass marching, taking supply drops, night operations, watermanship and river crossings, animal management, first aid, sanitation, individual cooking and a great deal more. His training, which had been harsh in the extreme had transformed him. Like all the men he had grown to hate his pack which even dry weighed around 32kg. Like many Chindits he carried around half his body weight up and down steep hills covered in dense jungle, in high humidity and with temperatures in the range  37◦C - 44◦C. 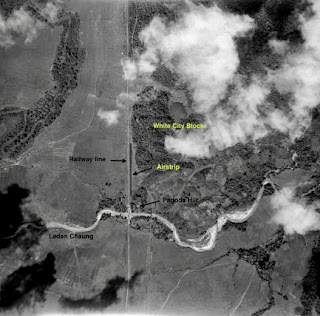 John was based in the area known as 'White City', named after the discarded parachutes which festooned the jungle canopy. On March 21, late in the day the Japanese launched a major night attack and fighting continued for the next 48 hours. The perimeter held, with the help of air support. John had recalled : “In our slit trenches we could see each night attack develop, with the advancing Japanese silhouetted against the sky. I spent seven weeks at White City. The hand-to-hand fighting continued. We used bayonets, machetes and knives.”

He also said that the monsoon rains started in April and continued until September: “It never stopped raining like stair rods and at night we worked on two columns. At night you slept where you fell. No ground sheets, no bedding. We all had malaria, not at the beginning, but at the end I had heavy dysentery.” While under mortar fire, John was hit by shrapnel as he sat on the edge of a trench.“The guy sitting next to me from Newport, he took a bellyful of shrapnel and as we were sitting on the edge of the trench, with our feet over the trench, his stomach fell out and I got it in my neck on the left hand side.” In his BBC interview John said : "Twice a day for 5 weeks they attacked. Morning and evening. Our losses were very heavy".

On another occasion he said : “Hundreds attacked us at about 07.00, with the last daylight assault at around 16.00. Night attacks then followed. Their bugle calls made us laugh. Bizarrely, they sounded like 'Tiger Rag'" - after the music of the US 'Original Dixieland Jass Band'. "We cut fire lanes on the approaches to the hill, but we had no wired defences at that stage. Nevertheless, our Vickers, Brens and 2in. mortars were sufficient to slaughter the Japs.”

Towards the end of March Wingate was killed when his plane crashed on the return journey in the hills around Bishenpur. There were reports of isolated storms in the area and also that the one of the B-25's engine was not developing full power. His death was a serious blow to the Chindits and changed the course of the rest of the Chindit campaign. When news of Wingate's death reached 77th Brigade, Brigadier Calvert commented : "Who will look after us now?"

In April, John's Battalion received the order to withdraw and move to a new stronghold to the north. By this time, John recalled :"Our casualties were so heavy that they dropped us lime because the stench was so bad. A full battalion is 1,001 men. Only 80 of us marched out." John was one of those 80 and the march almost killed him. As he said in the BBC interview : "When I went, I was 11 stone. I was now 8 stone 4 pounds. A skeleton. I'd no energy. No fight. No spark. So the rule was, before we went in : If you're killed, you're dead, because it's kill or be killed. If you're walking wounded, you carried on. If none of those things were possible and it impeded the advance of those 80 men, you were left with 4 days rations."

At this point he quivered with emotion and fighting back the tears he continued : "And I'm innocent." "I lay in a ditch with water in it and I couldn't move and I found I had a spark. I wasn't dead. I wasn't immobile and I got up and for 4 days and nights I marched alone until I reached our men.""I love talking about it because its a whole part of me." He then said emphatically : "But I shall never forget any one of those men". At which point, John raised one finger, "and I'm delighted to have the honour of being called a chindit."

John in his own words :
https://www.youtube.com/watch?v=AajGm9LStIQ&feature=youtu.be&t=70

“I was told. I was instructed, by those lying out there now – we left more out there than we brought home – and they said to us, "When you go home, please tell them of us.”


“There was a saying going around, that every Chindit will go to Heaven because he’d been to Hell.
It’s impossible to describe”. 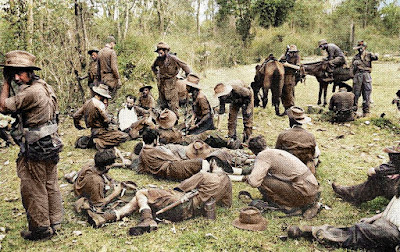