Britain is a country where, despite the easing of its Pandemic lockdown, countless Home Alone Old Men, remain locked in a state of chronic loneliness 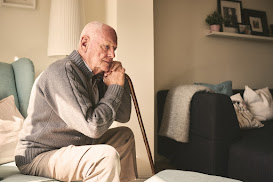 In Britain today 1,262,000 men and 2,440,000 women over the age of 65 live on their own and many of them live in a state of chronic loneliness. In fact, a review by 10 leading charities has found that a million old men and women over the age of 65 in Britain are likely to remain at risk of chronic loneliness despite the easing of coronavirus restrictions. The 'Older People’s Task and Finish Group' said that loneliness, social isolation and living alone are all associated with an increased risk of early death.
Before the pandemic, the country had 96 support organisations which provided help and support to the lonely but only 7% of 96  have returned to normal service. The 'Department for Digital, Culture, Media and Sport Tackling Loneliness Network ' said that almost three-quarters of older people questioned in the Network’s survey said they had no or significantly less support from the charities they had relied on before the pandemic.

Deborah Alsina, the Chief Executive of Independent Age said : “For people who told us loneliness was not just a product of lockdowns and shielding, but a symptom of their every day life before the pandemic, the easing of restrictions is not a silver bullet”.

Fiona Carragher, the Director of 'Research and Influencing' at the Alzheimer’s Society said : “The extremely damaging side-effects of lockdown – long periods of isolation, a loss of routine and social interaction – have caused significant mental health as well as physical health deterioration for people with dementia, many of them just ‘giving up’ on life, fading away. Many people we’ve spoken to are concerned that their isolation and loneliness will continue as restrictions ease because the support services they used previously have either shut down or are yet to be reinstated”.

A further survey by 'Age UK' found that, compared with before the pandemic, one in three respondents said they had 'less energy', one in four were 'unable to walk as far' as before, and one in five felt 'less steady on their feet'. In addition, one in five found it 'harder to remember things' and more than one in four felt 'less confident about spending time with family'. Caroline Abrahams, Age UK’s Charity Director said : “This pandemic has hit the fast-forward button on ageing for millions of older people. According to our research, as many as a third of all older people really are struggling”.

Emily Kenward, the Founder and CEO of 'Time to Talk Befriending', said the pandemic had had a catastrophic impact on older people’s confidence : “I’ve lost count the number of times I’ve heard older people tell us that they don’t want to live any more because they feel so invisible and alone. As we move into this new recovery and reintegration phase, 66% of our scheme members say they don’t yet feel ready to leave the four walls of their homes and 70% report a decline in their physical health acting as a barrier to getting out and about”.

Jenny Bimpson, a volunteer project manager at the 'Chatty Cafe Scheme', said: “Volunteers report that many of the senior citizens they speak to are now too afraid to go back out into their towns and villages, as they are genuinely afraid to mix again in public. They have huge anxiety about this despite government guidelines changing”.