Britain is no longer a country for and says "Farewell" to the much loved 'Prince of Architectural Photographers', Dennis Gilbert

Dennis, who had died at the age 70 was peerless among architectural photographers in Britain. Born in South Africa in 1951, his first ambition after leaving school was to pursue career as an engineer and to this end he attended the University of Natal and graduated as a Bachelor of Science in Electrical and Electronics Engineering, at the age of 22, in 1973.

He later reflected that as 'a South African engineer, I seemed to be headed for a Silicon Valley somewhere'. In the event, he said :  'Having left South Africa in 1975 for a year in South America, I found myself in a different Californian valley, studying photography at CalArts, north of Los Angeles : particularly the topographical American photographers of the 1930’s onwards'.

It is clear that the two years he spent at the California Institute of the Arts between the age of 27-29 was the formative period in his life as a professional photographer. Apart from picking up almost a dozen 'favourite' American photographers he also benefited from the tuition of Ann Callis and having graduated in 1978 he said : 'After the comfort of the Jo Ann Callis classroom, my task was, naturally, to work out the next question : what to do with my new enthusiasm?' In his case his answer was found in London and his work architecture and he confessed : 'I am attracted to both sides of photography and architecture: where science and art overlay each other'.

Dennis conveyed the pioneering nature of his work forty years ago when he wrote : 'Consider a large camera in a small room with furniture and just a few sheets of transparency film. Under the darkcloth, a dim image beckons on the ground glass, upside down and backwards. From where is it best to feel the space of the interior or the weight of the superstructure? Back then, you needed lots of kit, a spotmeter and, thank you, Edwin Land, help in Polaroid form'. He thought that he had been prepared for his work in the 21st century and had received 'adequate training for digital photography which offers a new universe' and was gratified that :  'Fortunately, there remains a thrill in figuring out a new picture to lob into the world’s archives that conveys the architecture and gives an idea of the physical experience. A composition that somehow works, regardless of the ‘rules’'.

In 1983 at the age of 32, Dennis formed and directed his own company based in London, 'VIEW Pictures Ltd' and in the years that followed said, with perfect self-effacement that he thought he'd : 'had the wonderful good fortune to work for several formidable architects: Norman Foster, O’Donnell + Tuomey, Grafton Architects, not forgetting the excellent Walters & Cohen Architects for example'.

In addition to his work in Britain, his practice took him back to South Africa where, on occasion, he was accompanied by an armed guard, caught by his friend, Matthew Barac, in Kruger National Park in 2007. He also worked in Japan, Hong Kong and Iceland. His description of Reykjavik, published in 2019 provides an insight into the sharp intelligence and perception he brought to his work and revealed that he was so much more than just 'a photographer' :
'For a photographer, working in Reykjavik is both a challenge and a delight. The weather is fierce and highly unpredictable. At the beginning of my first visit I had been working in dull cloud or rain for days, but one morning was woken suddenly by the sun streaming in through the hotel window onto my face. By the time I had scrambled to the City Hall, it had gone. That night it began to get dark around 11pm but a dusky light persisted until about 1am. Then the sky began clearing and brightening, promising an interesting sunrise and a sunny day – naturally I continued to work. By about 3am the city’s bars were closing and a big old Pontiac Catalina drew up, overloaded with clubbers who proceed to wade into the lake and splash about in front of the camera. At around 4am, just as the sun should have appeared, clouds rolled in again. The idea that the light could keep me up for 24 hours was completely novel, though it suggested some discipline would be required to manage life in this extreme place'.

'With a population only slightly larger than my own London Borough of Wandsworth, Iceland has made a disproportionate contribution to the world. Its people have excelled at endeavours such as film-making, music, art, photography, fishing, sheep-dung-smoked fish production, aluminum smelting, vegetable and flower growing, and of course banking and driving up glaciers in 4x4s with flat tyres. Since 1992 I have visited Reykjavik five or six times to photograph the work of Studio Granda, the husband and  wife team (Steve Christer and Margrét Harðardóttir) who won the Reykjavik City Hall competition shortly after finishing their studies at the Architectural Association. As someone who grew up in Calvinist South Africa, it is not only Iceland’s religious leanings that seem familiar to me. Many of the older buildings in Reykjavik are clad in that recognisable colonial material, corrugated iron. The revival of the charming central district means that many of these buildings, often richly painted, have been restored and occupied, unlike the boom-fueled speculative housing that now spreads around the city'.

In 2005, at the age of 54, Dennis had his achievements recognised when the Royal Institute of British Architects awarded him an Honorary Fellowship for his 'Contribution to Architecture'.

In 2009 he was commissioned by Ronald Asprey and Claire Bullus to  illustrate their book, 'The Statues of London'. It involved him photographing over 80 statues in bronze and stone in 32 London boroughs, from 'Boudicca' near the Houses of Parliament to 'Bobby Moore' at Wembley Stadium.

Dennis also worked as interior photographer for National Trust properties to advertise the locations and whet the appetite of potential visitors to venues like  Anglesey in Cambridgeshire with its 'Oak Room' with early seventeenth-century oak paneling and a plasterwork ceiling, cast from from a Jacobean ceiling in the Old Reindeer Inn in Banbury.
By 2020 Dennis had built up a formidable portfolio of his work : 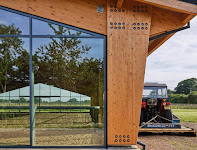 In 2020, in his published, 'Letter to a young architect', Dennis wrote : 'Photography is roughly 200 years old; many of the earliest photographs included buildings – they didn’t move. Monochrome darkroom methods always allowed radical manipulation, in both capturing the image and making the print. In the last 15 years, colour photography has caught up dramatically with the arrival of digital technology. All parameters that make up a colour image can now be carefully controlled to suit the user. It is like an unmarked canvas for the painter or a blank sheet of paper for the writer. Trends spread rapidly and can be seen everywhere: a very bright render look (if I can generalise) has taken hold, my opinion only, you understand? It can be some time before a photographer’s formal skill with the camera and the control of the pixels come together in a convincing personal style'.

Dennis asked the question ; 'Can photography of buildings be compared in any way to prose and poetry, or to drawing and painting?' and said, in response : 'One of my favourite photographers, David Goldblatt, once said that his work was ‘much closer to writing than painting … putting together a whole string of photographs is like producing a piece of writing. There is the possibility of making coherent statements in an interesting, subtle, complex way'.
'Photographs can suggest mass and reveal space. The medium can assemble countless items in the frame to savour one by one, in any order, or it could be just right as a dry documentary survey in picture form, or simply be used to point out a beautiful moment of the encounter'.
He continued : 'On the main dilemma : where to place the camera, Goldblatt dismisses theories on framing and composition with : ‘Isn’t it … just … what works?!’ Photography of your buildings must be an articulate and surprising record of the experience of the architecture. Include context and adjacent bits in your presentations, and people'.
He advised : 'Study photographers from all nations, identify a style and choose one to photograph your work. Consider the quirky and the understated. Develop a warm understanding and create an organised archive'. 'Save yourself a few bob: avoid PR agencies. If your architecture is any good, it will fly onto the web, into the magazines, books and newspapers. Success will follow, in part thanks to the pictures of excellent buildings, I admit'. 'Keep it simple: may most of your windows open by hand, your lights turn on by switch and your terrazzo be impeccably sustainable. Best wishes and good luck!
Dennis'

In 2019, at the age of 68, he embarked on a project which took him from photography to film making. In a zoom meeting last year he said : "I have some very famous clients, Walters and Cohen, who are two women who were from South Africa, like I was and they'd been in practice for 25 years and they wanted to do a 4 minute film of their work, so they invited us to do this. I don't have a lot of experience in making film, but I'd been working for them for 25 years so I knew their buildings very well and done all the stills on their buildings, so I was quite keen to get the job. But on the other hand, not so keen, because I knew it was to be a quite a mission".
https://www.youtube.com/watch?v=wp7q4aCVV-o&t=11m48s

Dennis continued : "I've always felt that architectural films that I've seen in the past have always lacked a little bit of the kind of intensity of an architectural photograph and I've always thought that there must be some way of bringing across the visual side of a photograph into a film. So that's what I was aiming for".
"For me it was just a big pressure, just to do it and in the first place, really, I had to teach myself editing and sound recording and sound cutting and all that stuff. So I was pleased just to be able to. It was good story in the end for me. As a project, this to me was particularly daunting for me. That's the point".
https://www.youtube.com/watch?v=wp7q4aCVV-o&t=21m51s
The film : 25 years of architecture by WALTERS & COHEN is collaged into a mere 6 minutes
Dennis said :
"Photography of architecture is a subtle process and takes quarryfuls of time" 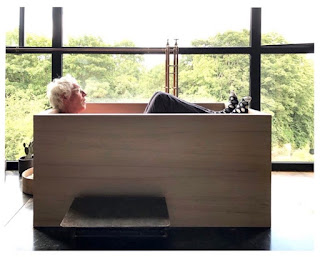