Britain is no longer a country for and says "Farewell" to an old artist, the 'Lowry of the Potteries', Sid Kirkham who left behind a legacy of love

'An affectionate look at The Potteries through the eyes of Sid Kirkham' gives, with 69 of his paintings, a beautiful evocation of his memories of a Staffordshire boyhood in the 1950s. 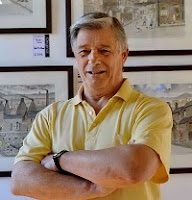 A Google search reveals over 200 images of Sid's watercolours and a number of references to his work in recent years, but there is very little meat on the bones as to answering the question : who was Sid Kirkham ? Even the tribute to him published yesterday in Stoke-on-Trent's newspaper, 'The Sentinel' contained little more, but did quote his friend and colleague Alan Gerrard, of Theartbay Gallery, Fenton, who said : "Sid’s paintings of industrial depictions adorn the walls of so many, near and far, in terraces and mansions. His gift was the ability to story-tell through the medium of watercolour. Hence the North Staffordshire landscape became almost secondary at times, a backdrop to illustrations of play, affection, work, devotion, family life and other activities taking place within the painting."

We know that he was born during the Second World War in 1943. in Porthill, a prosperous suburb of Newcastle-under-Lyme. The Frith photos from 1955 give a good idea of the streets he would have played on when he was 12 years old. It was, however, the view from the surrounding fields overlooking the industrial powerhouse of Etruria and Shelton which would provide him for his inspiration to paint over 50 years later. 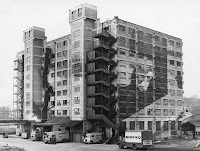 What he did between when he left school, probably when he was 15 or 16 in 1958/59 and when he retired, to take up painting at the age of 60 in 2003, remains a bit of a mystery, although in his appearance on BBC Midlands Today in 2009 he was described as : "A former company boss who was made redundant on his 60th birthday has forged a successful new career as an artist" and also as a former director of "the Tyre company" who had taught himself to paint 30 years before. It would be safe to assume that the company in question was the Michelin Tyre Company, based in Stoke-on-Trent. In addition, it indicates that he picked up his brushes for the first time in the 1980s and his pastime occupation as a painter couldn't have been further removed from his day time occupation in tyre manufacture. 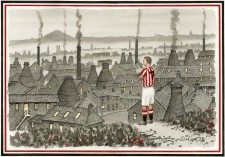 Stanley Matthews, the legendary footballer, had been born in Stoke 28 years before Sid and lived in a terraced house in Seymour Street, Hanley, the third of four sons born to Jack Matthews, a local boxer who was also known as the 'Fighting Barber of Hanley.' He played for Stoke before Sid was born and returned to Stoke to play at the age of 46 in 1961 and was the inspiration behind Sid's paintings and the exhibition 'The Father of Football' in 2015, of which Sid said : "I tried to show that as a lad, he was brought up in a terraced house in Hanley. His father was a barber and he used to practise his football in the backyard. He would put a set of chairs or dustbins or whatever out, get a bundle of rags, tie sting round them and dribble for hours on end just to develop the skill."


"We all dream of doing something that we love doing, but very few of us have that opportunity. But I've been given that opportunity, late in life, but better late than never." 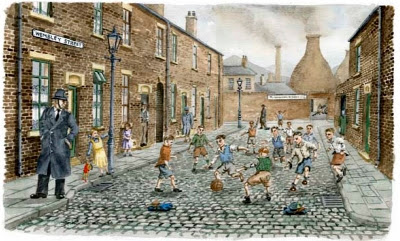