Britain is no country for David Abel, quarantined, on board a coronavirus-stricken cruise ship called the Diamond Princess, off the coast of Japan

When 74 year old David Abel and his wife Sally boarded Diamond Princess in Yokohama, near Tokyo, on January 20, they are looking forward to a two-week dream cruise to China, Vietnam, Taiwan and back to Japan. The ship had been described as 'a treasure trove of exceptional delights waiting to be discovered' where guests were invited to 'dine on freshly prepared sashimi in Kai Sushi, watch street performers in the dazzling atrium, or take in a lavish production show in our state-of-the-art theatre and for a unique treat visit the Izumi Japanese Bath, the largest of its kind at sea.' The ship was to be truly, their 'home away from home'.

The first thing David and Sally knew something was untoward was when they, the ship and the other 2,664 guests and 1,045  crew, returned to Yokohama a day early, on February 3. Apparently, this had been prompted by the fact that an 80-year-old guest who had left the ship in Hong Kong on January 25, had tested positive for coronavirus on February

The ship now remained stationary while Japanese health inspectors began to check all guests and crew and the 10 people, including a crewmember, who proved positive were taken ashore to hospital. David and Sally were told the ship had been put under quarantine for 14 days.

Day 2 : Wednesday 5th February
David went on Facebook at 11am local time to say he was an insulin dependent diabetic and hadn’t eaten since 7pm the previous night and risked going into a coma. The food eventually arrived 18 hours after his last meal, but he couldn't eat it because he is dairy intolerant. The crew later brought him bread rolls. Ten more guests tested positive and after being taken off and the ship headed out to sea so it could make more fresh water.
https://www.youtube.com/watch?v=qbvxhdUNr9g
https://www.youtube.com/watch?v=vO5WxVF8Ddc

Day 3 : Thursday 6th February
There were 41 new cases, including the first Briton. David and Sally were given thermometers and told to monitor their temperatures and that the quarantine would end on February 19, unless there are “unforeseen developments”.
David told ITV news : “Everybody is confined to their cabins. There is a lot more anxiety. What's going to happen to us? We've got access to the balcony all the time, but there are passengers in inside cabins where they've got no natural light, no windows, no fresh air. They are being allowed out on deck for a period of time under the supervision of quarantine officers. They must stay one metre apart and not congregate in groups.”

Six more cases were confirmed and David and Sally were given phone numbers to talk to counsellors for mental stress. Meanwhile, Jan Swartz, the President of Princess Cruises, said : “Our guests and crew on board Diamond Princess are the focus of our entire global organisation right now and all of our hearts are with each of them.”

Day 6 : Sunday 9th February
As if it was any consolation, David and Sally were told that they will get a full refund of the fare plus flights, hotel stays, gratuities and other costs and will also not be charged for any onboard expences. The ship returned to Yokohama after a choppy night at sea. David, who had been pining for Talisker whisky, was delivered a bottle to his room with a message from Jan Swartz saying : 'We want to thank you for helping keep spirits high on board and we hope you enjoy these spirits as a gesture of our appreciation.'

Day 7 : Monday 10th
Another 66 cases of coronavirus are confirmed on board, including one more Briton, bringing the total to 135.

Day 8 : Tuesday 11th February
At this point David said on Facebook that the whole experience “hasn’t put us off cruising”.

The Japanese Ministry of Health confirmed 39 new cases from Diamond Princess and a quarantine official, who was wearing a mask and gloves while collecting questionnaires from passengers, had also tested positive for the virus said Health Minister, Katsunobu Kato. Four patients in hospital from the ship were in a “severe” condition with two in intensive care and the others being given assistance to breathe.
In a live interview with Sky News, Sally Abel said they are being treated very well but the final week of quarantine “seems an eternity to go”. David reported that 55 doctors, 45 nurses and 30 pharmacists had been brought on board but the mood generally was more sombre, with one elderly woman keeping others awake crying for “a couple of hours” in her cabin during the night. David admitted : “Life isn’t as easy as it was last week. It’s a bit more challenging.”

Day 10 : Thursday 13th February
Another 44 people on the ship tested positive, including one crew member, bringing the total so far to 218. Most of the new cases are among passengers like David, aged 70 or over. In fact, four in five out of the holidaymakers who boarded were over 60, with 215 in their 80s and 11 in their 90s. 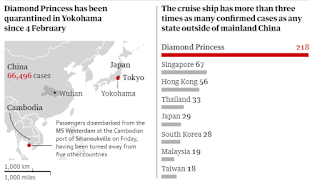 In an interview with 'Good Morning Britain' David and Sally said they were worried they would be separated by health officials if either of them tested positive for the virus - something which had already happened to others on board. He said : "It doesn't matter how long you've been married, couples have been separated. Elderly couples, one I understand in their eighties, have been split up. It's very, very worrying for those on board." Sally added : "We've been together 50 years and the thought of one of us being positive and one not and being split is very scary."

Day 11 : Friday 14th February
David said that although he was a  “staunch Tory” he had no confidence in Prime Minister Johnson helping them. "When he [Johnson] just says 'keep calm, don't panic' - I'd like to see you in this situation, mate. I really would."

Instead he said : "So, Richard Branson, I want to ask you a question, Pal. If you and your family were in this situation, what would you do? And please don't say 'chill out, stay calm', that's not what we want to hear."I'm asking, what would it cost to hire one of your smaller planes, put all the Brits on board, no flight attendants, packaged food? Take us to Brize Norton, take us straight into the medical facility and let us do our quarantine there by people who can speak our language. I’m serious, Richard Branson, absolutely serious. I think he is the man, he’s not afraid to speak his mind. He’s the guy who could resolve this for the Brits. Whatever the cost, we will somehow find a way of paying for that plane. Don’t know how but we wouldn’t want you to be out of pocket on that. But this is just how damned desperate some of the passengers are becoming. We’ve had enough, we’ve really had enough.”

Day 12 : Saturday 15th February
The USA announced that it is to airlift out of Japan those among the 400 citizens on the ship
who are willing to leave and clearly does't believe the quarantine on the ship is working and that its citizens on board are in danger. Canada and Hong Kong have announced they are also sending planes to pick up their nationals.

In a video on Facebook, David said he had little hope of a similar rescue and said : “It’s wonderful how the Americans are going to come in two aeroplanes and take them home. I’ve now given up on anybody in the UK, quite frankly and realise all us Brits are going to have to do our own thing." Sally said : "Nobody's actually talking to us."  David added : "No message from the UK Foreign Office. They just don't give a damn."

Meanwhile the Foreign Office announced that it was "working around the clock" to ensure the welfare of Britons onboard and would, no doubt, make the point that David and Sally had refused the offer to be taken off the ship.

Day 13 : Sunday 16th February
It is reported there have now been 365 cases of the coronavirus on board making it the biggest cluster outside China. David pleaded : "It feels that we have been forgotten, that you don't really care about us and that you're actually not wanting us to come home. I am begging you to get us off ASAP. I've never felt less loved by my own country. Are you closing the borders to us ?" 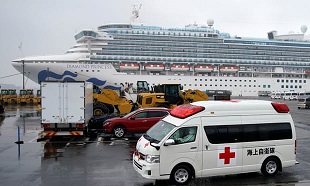 David made a further plea to the Government : https://www.youtube.com/watch?v=wyhPay7OE3o7t=2m56s


Day 15 : Tuesday 16th February
The total number of cases on the ship has reached 450 and David Abel and Sally have today tested positive and are among that number and will now be taken into a further quarantine on the mainland just a day before their lockdown on board the ship was due to end. David said : 'We have been proved positive and leaving for hospital soon. Blessings all.'

The Foreign Office said that it was 'working to organise a flight back to the UK' for British passengers but it is unclear whether David and Sally will now be eligible.

David has now posted on Facebook that he was having doubts about whether the couple's test really was a positive one. "Frankly, I think this is a setup! We are NOT being taken to a hospital but a hostel. No phone, no wi-fi and no medical facilities. I really am smelling a very big rat here! Waiting for the transfer now."

Day 16 : Wednesday 17th February
David and Sally are still on board and have tested positive for the virus. David is no longer posting on Facebook and the couple will be taken to a hostel before being taken to a hospital. 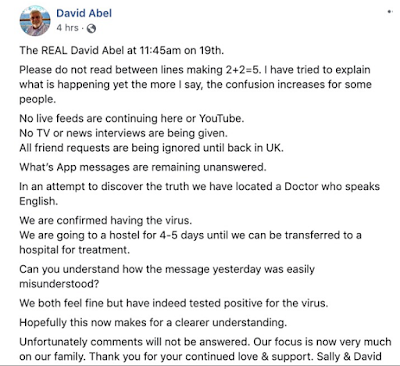