Is Britain a country which will remember the good done by an old TV newsreader called Alastair Stewart or only a tweet ?

Alastair, who is 67, was 28 years old  when he joined ITN in 1980. He served Channel 4 for three years before moving to ITV News where he became a main newsreader and remained in this role for more than 35 years, making him the longest-serving male newsreader on British television, having worked in both local and national news for a total of 44 years.

I sent Alastair a tweet in 2017, referring to a tweet in which he'd mentioned the death of the war correspondent, his old colleague, Michael Nicholson. I included a link to my blog post : 'Britain is no longer a country for and says "Farewell" to an old and fearless TV news, war correspondent called Michael Nicholson.' I was chuffed that he'd obviously taken the time to look at my post, since he tweeted back : 'Wow; comprehensive, candid and well written '

Apparently, at the beginning of this month, Alistair and Martin Shapland, who is black, were debating the Royal Family’s finances online when the news anchor cited a passage from Shakespeare’s 'Measure for Measure' that included the phrase ‘angry ape’.

He is fond of the quote, knows it by heart and has used it in an exchange with another twitter user in 2019 who is white. It and is from that dark comedy about a judge, Angelo, who temporarily leads the government in Vienna while the Duke is away and has got the idea into his head that it's up to him to reform the criminal justice system. He begins by ruthlessly enforcing laws which had been ignored for years. One such law condemns fornicators to die and his first victim is the brother of Isabella, a novice at the local convent. It is when he tells her : "Be satisfied : Your brother dies to-morrow: be content", that she makes the reply which Alastair quotes which approximates to :

But give a proud man
A little bit of temporary authority
And he forgets what it means
To be made in God’s image. Instead, like an angry ape
That mimics people’s behavior, he does such incredibly grotesque things before high heaven
That the angels, if they were human, would either weep or die laughing.

He was clearly very upset by the reference Alistair had made and three weeks later, ITN responded when it announced that Alastair was stepping down as a newsreader following 'errors of judgment' in his 'use of social media.' Alistair himself,, who deleted his Twitter account before the announcement, said in a statement : 'It was a misjudgment which I regret, but it’s been a privilege to bring the news to households throughout the UK for the past 40 years.' He also told friends he was 'very sad it was ending this way' after 40 years in the job.

Alistair's supporters said he appeared to have a habit of using the phrase to make a point about those he felt were claiming to be experts in a certain field and an ITN insider said : ‘He would have thought he was being clever and it was merely an innocent put-down. He is certainly not a racist in any way.'

In support of Alastair it now seems appropriate that he isn't remembered solely for his misjudged tweet. In Shakespeare's 'Julius Caesar', Marc Anthony's judgement on the death of Caesar was :

"The evil that men do lives after them;
The good is oft interred with their bones."


What good has Alastair done, which should not be interred within his bones? 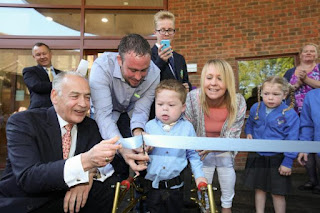 Alistair at the opening of Naomi House after its £4m refurbishment. Alistair was already a patron of the charity 'Naomi House and Jacksplace' when they approached him in 2014 to ask him to lead their Caterpillar Appeal because it needed a 'figurehead with gravitas and passion for the cause.'

The charity's provides hospice care to more than 525 life limited and life threatened children, young adults and their extended families. Apparently, Alastair threw himself into supporting the appeal and attended all its key moments, from speaking at length about the charity’s work at its press launch to climbing the 30-foot scaffolding to place the final roof tile at the hospice’s topping-out ceremony. The charity said new supporters emerged throughout the appeal with the same story to tell : "Alastair said we should get in touch."

He tirelessly encouraged his media contacts to retain interest in the story and his efforts led to the Parliamentary Press gallery supporting the cause. The charity said he also spent considerable amounts of time with the children, young people and families that it cares for, including spending more than an hour with a boy receiving end-of-life care from the charity.The appeal ended up receiving more than 10,000 donations to hit its target and said that without his support it would have taken longer to raise the funds it needed and it might have had to complete the work to a lower specification.

He has been and is an active supporter of the charity 'Kids for Kids' which helps villages in Darfur and serves alongside its other celebreties : Ruth Rendell, Miriam Margolyes, Timothy West, and Javier Solana and patrons, Julie Etchingham and Joanna Lumley.

He is also an ambassador for 'Action for Children'  a children's charity committed to helping vulnerable children and young people and their families, throughout Britain. On its behalf he has attended numerous events, including Parliamentary Receptions and hosted summer balls and breakfast briefings.

He is a patron of 'Scope', a national disability charity that campaigns to challenge and change negative attitudes about disability and provides direct services. In 2011 he hosted a fundraising event where Scope Chair, Alice Maynard, explained how the money raised would support 'Face 2 Face' parent befriending schemes that support 4,000 families of disabled children every year.

He is a 'Broadcasting Supporter' of  'Sporting Memories Foundation' which aims to tackle dementia, depression and loneliness through the power of sport. It is the wing of 'Sporting Memories Network' which trains and supports volunteers to deliver sports reminiscence in England and Wales. In June last year he adverited the Foundation's first national conference on facebook.

He is also a patron for 'Brooke Action For Working Horses and Donkeys', the largest equine charity in the world and in April 2019 he visited Senegal to see for himself the work of the charity.

He said : 'While in SenegaI, I got kissed by donkeys and watched children in UK football shirts tending horses. I saw a brilliant young woman demonstrate the art and science of being a farrier and a shelter that will enhance the health and safety of working equines and help their owners prosper. It was all very Brooke. But I also saw and heard a senior Senegalese Minister recognise the good in what we do and ask for more. It was extraordinary.'  In August 2019 he headed its 'Donkey Trade Crisis Appeal'.


"Every charity needs an Alastair"

In 2006 Alastair received an OBE in 2006 for 'Services to Broadcasting and Charity.'