Will Britain be a country for an old Joe Brindle in 2075 ?

I was the same age as Joe, who is 17, in 1964. That was one year after the 'Big Freeze' and the coldest winter in Britain in the twentieth century. 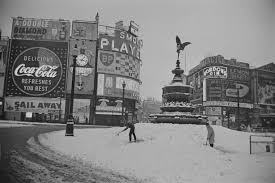 Joe was “angry about the injustice that is allowing the most vulnerable people in the world to suffer from the actions of the richest and most powerful.” He was clearly inspired by climate activist, Greta Thunberg who, in her forthright speech to the United Nations last September, said that as young people begin to understand adults’ betrayal of the planet, “the eyes of all future generations will be watching."

Taking a leaf out of Greta's book, Joe decided to do something and founded a campaign group, 'Teach the Future', which has spent the last few months formulating legislation entitled 'The Climate Emergency Education Bill'.
He was no fool when it came to taking on the Establishment and said : “We didn’t want our demands to be half met, so we thought we’d show them exactly what we want.” Hence, the hiring of  an experienced drafter in a  move to quash any notion that young people’s ideas are unworthy of serious consideration.

As part of their campaign, on 26 February, Joe and his fellow campaigners will gather in Parliament’s biggest Committee Room to launch their bill, sponsored by Nadia Whittome, Britain's youngest Member of Parliament.

As well as the proposed new act, 'Teach the Future' is calling for a Government review into how the education system is preparing students for the climate emergency and the ecological crisis. It wants teacher training to assess a minimum standard of knowledge about climate change and its impact, and a national fund to help young people’s voices be heard. It calls for all new state-funded educational buildings to have a zero-carbon footprint from 2022, with the entire education sector becoming net-zero by 2030 and a 'Youth Climate Endowment Fund' to support young people’s projects and ideas.

Joe's has called for a fundamental change and said : “Some people have been pushing a natural history GCSE as the solution to climate education, but I think this furthers us from the solution. Rather than pushing this aside so that only a handful of students learn about it, we should be making it a key aspect of all parts of education."

“We don’t just want future ecologists to understand sustainability. We want bankers, builders and everyone else to consider it in everything they do.”

The auguries do not bode well for Joe and 'Teach the Future'. The Department for Education says it understands the importance of students learning about climate change and “relevant topics are included in the national curriculum for both primary and secondary schools”. However, when asked if there were plans for new guidance, a spokesperson could offer nothing specific.

In addition, last week Prime Minister Johnson said Britain would lead the world in cutting carbon emissions, but was accused by Claire O’Neill, who he had sacked as Energy Minister, of a “huge lack of leadership and engagement”.