Post-Brexit Britain, is no country for an old novelist called Ian McEwan who senses 'damage and diminishment ahead'

I last saw Ian McEwan when he was 19 going on 20 and I was 20 going on 21. We were both bespectacled students studying for a Arts degree in the School of English and American Studies at the University of Sussex. It was the mid 1960s and were both having a lunchtime drink in the University bar. Needless to say, Ian didn't speak to me, but to my Northern Irish fiend, Bobby Ballagh, who just happened to be the captain of the University's Rugby Team.

Since our Sussex days, Ian has travelled far and I ? Well, not quite so far. The Times featured him on its list of 'The 50 greatest British writers since 1945' and The Daily Telegraph ranked him number 19 in its list of the '100 most powerful people in British culture'. He now has 27 novels under his belt, with his 'Atonement' in 2001 adapted into an Oscar-winning film starring Keira Knightley and James McAvoy.

Ian was always a remainer in the Brexit debate, who : 'held out for a kinder sort of world'  but recognised : 'we were always the herbivores in this debate, with our enormous, good-natured and derided marches – “a hate-filled crowd”, the Sun; “an elite”, the Daily Telegraph. If 16 million remainers are an elite, then we may rejoice that the UK is a model of meritocracy.' 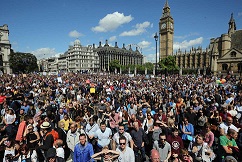 Over the last three years, Ian has been vocal in his opposition to Brexit and has always believed 'that the long-evolved ecology of the EU has profoundly shaped the flora of our nation’s landscape and to rip these plants out will be brutal.'  In addition, for Britain, 'any future international trade deals or treaties are a compromise with sovereignty, as is our signature on the Paris accords, or our membership of Nato, and that therefore “Take Back Control” was the emptiest, most cynical promise of this sorry season.'

Now Ian says : 'It’s done. A triumph of dogged negotiation by May then, briefly, Johnson, has fulfilled the most pointless, masochistic ambition ever dreamed of in the history of these islands. The rest of the world, presidents Putin and Trump excepted, have watched on in astonishment and dismay.'

In answer to the question : 'Where do we go now ?' He says : 'We must pack up our tents, perhaps to the sound of church bells, and hope to begin the 15-year trudge, back towards some semblance of where we were yesterday with our multiple trade deals, security, health and scientific co-operation and a thousand other useful arrangements'.

He thinks that given the fact that 'any mode of departure, by the government’s own estimate, will shrink the economy'. 'At least, we can all agree that we will be a bit poorer. As one of my school teachers used to say, if a thing is really worth doing, it’s worth doing badly. Theresa May could never bring herself to say that Brexit would make us better off. We should credit her honesty.'

He referred to history : 'Summon everything you’ve learned of the ruinous, desperate state of Europe in 1945, then contemplate a stupendous economic, political and cultural achievement: peace, open borders, relative prosperity, and the encouragement of individual rights, tolerance and freedom of expression. Until Friday this was where our grown-up children went at will to live and work. That’s over, and for now the force is with English nationalism.' 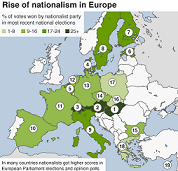 Ian is full of foreboding and 'senses damage and diminishment ahead. In a dangerous world crowded with loud-mouthed “strongmen”, the EU was our best hope for an open, tolerant, free and peaceful community of nations. 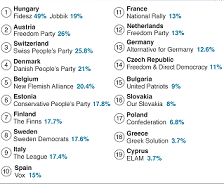 Those hopes are already threatened as populist movements have swept across Europe. Our withdrawal will weaken resistance to the xenophobic tendency. The lesson of our nation’s history these past centuries is plain: turmoil in continental Europe will draw us into bloody conflicts. Nationalism is rarely a project for peace. Nor does it care to counter climate change. It prefers to let tropical forests and the Australian bush burn.'