Britain is a country where old men remember this day 50 years ago, being boys, snow falling and the start of the coldest winter for over 200 years 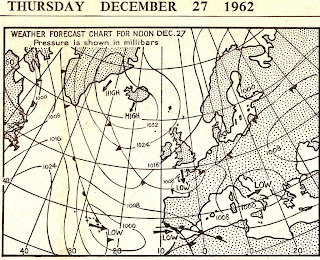 I was a boy of 15 living in South London when the snow began to fall on this day exactly 50 years ago and what we didn't know then was that it was to herald the start of 'The Big Feeze' and one of the coldest of winters. In fact, the records extending back to 1659, showed only the winter of 1683–84 to have been significantly colder and 1739–40 being slightly colder than that of 1962–63.
http://www.youtube.com/watch?v=_bT5zlj_usY

From that point on : 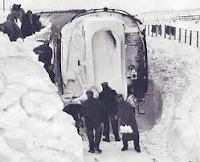 * on 29–30 December a blizzard swept across South West England and Wales with snow over 6 metres deep in places driven on by gale force easterly winds, blocking roads and railways.

* January 1963 was the coldest month of the 20th Century with much of England and Wales snow covered with temperatures as low as −19.4 °C at Achany in Sutherland and freezing fog a hazard for most of the country.

* temperatures plummeted and lakes and rivers began to freeze over and as the cold persisted, at Herne Bay in Kent, even the sea froze over up to 1.6 km from the shore.

* in February 1963 more snow fell with a 36 hour blizzard causing heavy drifting in most parts of the country and in some areas, gale force winds reaching up to 130 km/h.

* over 2 months after the Freeze began, a thaw set in during early March and the 6th was the first morning of the year without any frost anywhere in Britain.

* temperatures now soared to 17 °C and the winter was over leaving those who had lived through it with a yardstick with which to measure the severity of all their following winters.

Memories of the big freeze : http://www.youtube.com/watch?v=xAQ3Wg-I6gw 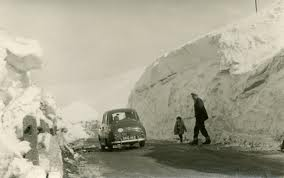