Tommy, widely regarded as Britain's first teen idol and rock and roll star in the 1950s was born in Bermondsey, London, Thomas William Hicks, in 1936, three years before the outbreak of the Second World War, is 76 years old today. I was a little too young to be caught up with the Tommy craze, but I do remember going to the cinema and seeing his film, 'Tommy the Toreador' when I was 12 in 1959.
https://www.youtube.com/watch?v=eVddTjF-CEM

What you possibly didn't know about Tommy was that : 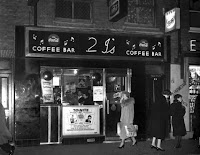 * after leaving school worked briefly in the Merchant Navy and either on leave or during London dock strikes, played guitar and banjo and sang in Soho in 'The 2i's Coffee Bar' and the 'Cat's Whisker' where hand-jiving (left) was devised, working as a solo performer and with 'Wally Whyton's Vipers Skiffle Group'.
http://www.nickelinthemachine.com/2008/07/soho-and-the-2-is-coffee-bar/

* when a ship he served on docked in Norfolk, Virginia in the USA, heard Buddy Holly, fell in love with 'rock and roll' and turned his back on the British skiffle craze.

* was 'discovered' by freelance photographer John Kennedy, who believed he could be Britain's answer to Elvis Presley and decided to adapt and adopt the surname of his Scandinavian paternal grandfather, Thomas Stil-Hicks. 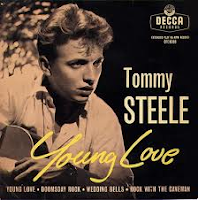 *  quickly emerged as the frontman for a rock and roll band, 'The Steelmen', with their first single, 'Rock With The Caveman,' and started to pick known hit records from the USA and record and release a cover version before the American version could enter the charts hence 'Singing the Blues' in 1957 before Presley :
https://www.youtube.com/watch?v=AU_atFdI89I

* apparently spent a day with Elvis in London in 1958 after he had finished his Army service in Germany and later said: “It was two young men sharing the same love of their music. I swore never to divulge publicly what took place and I regret that it has found some way of getting into the light. I only hope he can forgive me."

* revisited his youth in his autobiography, 'Bermondsey Boy: Memories of a Forgotten World'.

* was interviewed 2 years ago looking incredibly spry at the age of 74 :
https://www.youtube.com/watch?v=GtW7aOA6Kxs

* said ; "I owe it all to Dick Campion, a waiter on the Mauretania. He taught me to play the guitar when we were at sea together."