Bob, who was renowned as a television sitcom and screenplay writer with his professional partner, the late John Esmonde for 30 years, has died aged 77. Bob and John are most remembered for 'The Good Life' in the mid 1970s

* was born in the summer of 1934 in Lambeth, South London, where his father was a carpenter and at the age of 11 at the end of the Second World War, attended  the Henry Thornton School in Clapham, where he was captain of tennis.

* in the small school of 450 boys, got to know John Esmonde, three years his junior, who had been born in Battersea in 1937, found they shared a similar south London schoolboy humour and later said : "We'd make each other laugh a lot, sometimes other people too" and could been in the 1948 school photo as a second year pupil standing in the row behind the teachers.

* acquired and kept his London working class speech pattern with its 'would of' for 'would have' and 'could of' for 'could have' for the rest of his life  https://www.youtube.com/watch?v=6fjDZSvzMVw as indicated in him talking about his last collaboration with John in the 1990s with the tv series, 'Mulberry', in which Karl Howman as the Son of Death, disguised as a manservant, parried the barbs and put-downs of his employer, a cantankerous old spinster played by Geraldine McEwan.

* left school and worked as a printing-block maker, in an insurance office in Soho and then did his National Service with the Army Education Corps in Germany and by the time John had finished his National Service in the RAF and was a journalist writing about food processing and packaging, had a job in a foundry.

* "moan over our egg and chips, saying "God, we've got to get out of this!" We just thought writing might be a way to do so, and it proved to be right" and after two years of  rejection slips, the BBC eventually accepted for a radio programme which included Cyril Fletcher and earned them a joint fee of five guineas.

* started on television in 1963 with sketches for 'The Dick Emery Show' and had a breakthrough with a radio sitcom at the age of 31 in 1965 with 'Spare a Copper' featuring the 'Carry On' film star, Kenneth Connor, as a bungling policeman which provided the money with John to become a full-time writers.

* had a first tv series, 'Room at the Bottom' in 1967, set among the maintenance workers at Saracens Manufacturing Company with the comedy revolving around the confrontations between the workers'  leader, Gus Fogg played by Kenneth Connor and the company's personnel director, Deryck Guyler, which did not prove a success. 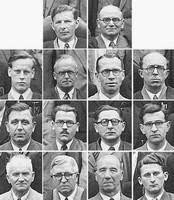 * saw the next idea become one of television's most popular sitcoms when in 1968 turned down by the BBC, 'Please Sir!' was snapped up by ITV and became a favourite with 20 million viewers running for four years until 1972 and set in Fenn Street Secondary Modern School, with John Alderton as Bernard Hedges, the fledgling teacher trying to keep order among the unruly pupils of Class 5C.
https://www.youtube.com/watch?v=EufQ-wWyDRE&list=PLF498FA5C71431554

* was said by Peter Cleal, who played 'Duffy' in the series to have called upon his and John's own experience, presumably in creating the teachers and pupils, which could only take them back to the Henry Thornton School and memories of its teachers (right) in the 1950s.

* with his next success drew on his and John's National Service experience in the 1950s to create 'Get Some In!' which ran from 1975-78.
https://www.youtube.com/watch?v=Ij0A3DHF25k 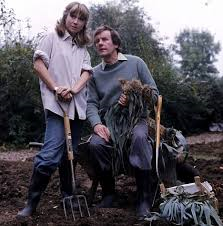 * as he celebrated his 40th birthday, with John, moved away from his own experience with their most popular and successful series, 'The Good Life', screened in 1975, poking gentle fun at the middle classes, with Tom Good, a draughtsman for a plastics company, played by the late Richard Briers, turned 40 and seizing the occasion to drop out of the rat-race in favour of suburban self-sufficiency with his wife Barbara played by Felicity Kendal.  https://www.youtube.com/watch?v=hHMb4SJLzzQ

* later said : "We already knew Richard Briers, who was the same age as me, and that was really the start of our thinking: a man who reaches 40 and is just fed up. Fed up with what he's doing and with life generally. How does he break out of it? We hit upon self-sufficiency - but could just have easily decided that he bought a boat and sails around the world. Although that'd have been difficult to film!"

That other great sitcom writer, John Sullivan, who died three years ago, who gave us 'Only Fools and Horses', was born twelve years after Bob and was also a working class South London lad. Born in Balham, fifteen minutes away from Lambeth, his father was a plumber.