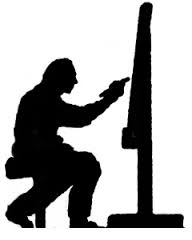 Alan who has his work in permanent collections in the V&A, the Tate, the Museum of Modern Art, New York and the National Museum of Canada and the Berlin National Gallery is 88 years old today and remains a little known artist whose reputation stands higher in France and Germany than it does in Britain. Neglected by the English art establishment, he stuck to his guns after turning his back on landscape painting and continued to produce a meticulous body of drawn and constructed abstract art in black and white, shadow and light.

* was born in the year of the General Strike in 1926, in Newmarket in Suffolk where his father, who had Scottish blood, worked as a stableman and his mother was from Suffolk stock and taught himself to paint after leaving school at the age of 14. 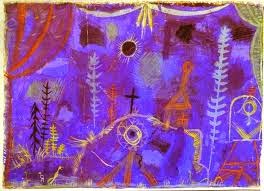 * during the Second World War, at the age of 18 in 1944, served with the Suffolk Regiment and the Highland Light Infantry in France, Belgium, Holland and Germany and later said : ‘When the war finished, my division was broken up. We were all sent off to different places and I finished up training as an army schoolmaster and eventually settled in Hanover for about a year and a half.’ where he first encountered Paul Klee and avant-garde art which was 'the most important experience I had, I would think.’

* was demobilised from the Army in 1947 and later said : "I was on a high over what I’d seen in Germany but I didn’t understand the philosophy. I call it that but for an artist to have an aesthetic philosophy is poisonous in this country — you can get shot for that. When I came back here I was totally baffled by the more sophisticated art circles in London. It was such a gloomy sort of set-up, partly as a result of the War, I suppose, an indrawn nationalism. You can understand it: the country had been through a hell of a time and it had been cut off culturally, no question of that."

* at the age of 22 in 1948, began his studies at the Woolwich Polytechnic in London and although originally a figurative painter, tended increasingly towards abstraction after his contact with the work of Klee and continued his studies between the ages of 26 -27 at the Royal College of Art.

* remembered the first Skira art books coming out when he was a student where there had been none before and was critical of post-War English provincialism : "The art world or art groups in Europe are much more open and accessible and always have been, than in this country. France and Germany are big countries, and Germany especially has centres of excellence everywhere — a legacy of the old princedoms. It’s not all centred on one place, like London, and it stops this dictatorship — the rule of the arbiters of taste that we have here.’

* while still a student, had a one-man exhibition at the Redfern Gallery 1952, where his distinctive silhouetted style, in which dark linear forms stood out against luminous backgrounds, caught on at once and later said this early success was "embarrassing", though the financial rewards were "welcome".

* said in his introduction to his Redfern Gallery Exhibition catalogue in the Spring of  1953 : 'Poetry is never absent from Nature, but alone it cannot constitute a work of art. It must be reconciled with the elements of design and composition. Laying emphasis on the formal values in a work will therefore result in a degree of abstraction. This is, to me, the logical development of the motif towards its transformation into a picture.' 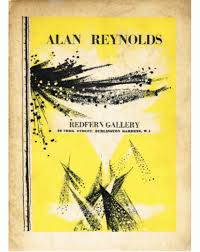 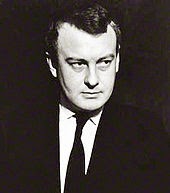 * emerged from the Royal College of Art 'fêted', as Bryan Robertson (right) wrote, as 'the golden boy of post neo-romanticism in England with his engagement with landscape, from his native Suffolk to the hop gardens and orchards of his adoptive Kent, inspired in part by Constable and Paul Nash but also Klee and increasingly by Mondrian.

* taught at the Central School of Art and Design from 1954 - 61 and had a one man exhibition in New York at Durlacher Bros in 1954 and was one of the three international prize-winners in the Giovani Pittoria Exhibition in Rome in 1955 and started to move his paintings towards abstraction in 1958 and thus abandoned a lucrative career as a landscape painter saying : "I’ve been a European since the war finished. I think of myself first as a European and an Anglo–Scot after that." 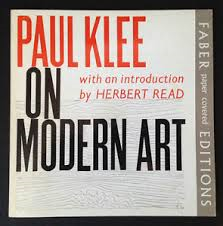 * later said that he knew his art had to develop : "I was after something else, I had something ticking away inside me. I was lucky enough to read some things by Herbert Read, particularly his Faber book on Klee, and it was just like getting a pat on the back. It was marvellous — I thought, 'This man’s been there'. Read was a great scholar and an extraordinary man and he was British! I only met him twice but he gave me a lot of support."

* said : "What I really got from Klee was an aesthetic philosophy. He was a wonderfully accomplished musician — first violin for the Bern chamber orchestra, for a start — and he brought something of the insight of music into statements he made on visual art. He was incredibly articulate and also into metaphysics and that again is a German trait" and on another occasion :  "I’ve been a European since the war finished. I think of myself first as a European and an Anglo–Scot after that." 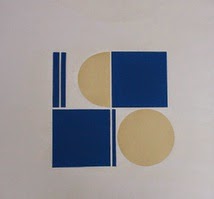 * moved to teach at Saint Martin's School of Art and in 1967 at the age of 31 and abandoning painting entirely to make only white reliefs, tonal drawings and woodcuts, never again enjoyed the same degree of commercial success he'd had in the 1950s and continued to teach until he retired at the age of 64 in 1990.