Britain is no country and a country with more and more lonely old men like Harold Morgan, who die alone, unmourned by family or friends

The number of lonely, council-funded funerals for old men and women who die alone, without funds and neither friends nor family is on the increase, sometimes with painfully long periods, before their deaths are noticed and bodies discovered. The figure stood at 21,000 three years ago. In the case of funerals for old men like this, the coffin is plain and black and cost-pared, rather than varnished.

One such funeral took place in 2009 when Father McCormack, a funeral officiant in Worthing and Brighton said : "Often all I will know about someone is their name and their age, for example, today Gerald was 79 years old, that's 79 years of life, that's 79 years of life and it's just so sad that in this moment, there's no one who can recall that, relate to that, talk about that, connect with that."
Gerald's case was one which was highlighted by John Waite in his BBC Radio 4 programme : 'A Death Unnnoticed' in 2009 in his 'Face the Facts' series : http://www.bbc.co.uk/programmes/b00lr2g8

This week, eighty-five year old, Harold Morgan, would have had a funeral without family and friends if it had not had been for Reverend Rachel Simpson, who told 'WalesOnline', that it would have been "horrible" if no-one was there to witness his funeral. Worried that it would only be attended by staff  from his care home and his solicitors, she made a Facebook appeal to trace family or friends to attend at St Tathan Church in St Athan, in the Vale of Glamorgan in South Wales.This and twitter activity, with retweets by the likes of Jeremy Bowen, prompted so many to turn up that the police were on hand to control parking. While soldiers from the First Battalion Welsh Guards, in full uniform, formed a guard of honour for Harold's coffin as to was carried in to the Church accompanied by a military pipe, which played the tune of the National Anthem. Outside dozens lined the streets in the rain to listen to her funeral oration transmitted by loudspeaker.

Rachel said: "I am really pleased for Harold that his funeral has not been held in an empty church. Even though it was sad we had to make an appeal in this way I am so proud of the response from the community - many of whom came to the funeral of a man they may never even have met."
Without her intervention Harold would have joined the increasing number of old men who die having lived a life unrecalled, unrelated to, unconnected with and undiscussed by a single, human being. No doubt Harold died thinking that this would be the case for him and no number of mourners could put that right and extinguish the feelingl, while he was alive, that he was not forgotten.

Without the appeal we would not have known that Harold :

* was born in 1929 in Oxford with Welsh family roots in the Carmarthenshire area. 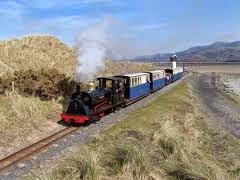 * did his two years National Service with the Welsh Guards after the Second World War in the late 1940s and served in Egypt where he played rugby for the regiment on a pitch made of sand.

* had worked as a railway signalman in the Reading area and as a railway enthusiast and scale model railway maker, in his forties in the 1970s, co-founded the 'Welsh Railways Research Circle', where his main interest was the Brecon and Merthyr Railway and wrote 'South Wales Branch Lines', published in 1984. http://www.wrrc.org.uk/about.php

* died alone in his care home in Barry.

* had a green burial today in Abermule, overlooking the Cambrian Railway Line.

Without the appeal, his funeral would not have had :

* strangers in attendance, who had never met him.

* a contingent of Welsh Guards, led by Sergeant David Scarf with a message to Rachel from senior officers saying : 'Guards do not die alone'.

* mourners sing 'Men of Harlech' and 'The Old Rugged Cross.'

* in attendance, 30 teenage military hopefuls from The Military Preparation College in Cardiff with Brian Edwards, Senior Director saying : "As soon as we saw this appeal on Facebook and Twitter, we knew our Cardiff students would want to be there to pay their respects to a former soldier from our community."

A floral display for the funeral was donated free of charge from a florist from Barry and regimental colours draped over his coffin from the Welsh Guards Association. https://www.youtube.com/watch?v=k9-VdT60l10

Harold died without knowing that a Facebook appeal, twitter campaign and his two years compulsory National Service in the Welsh Guards sixty five years ago, would ensure that he was remembered by more than a handful of mourners. 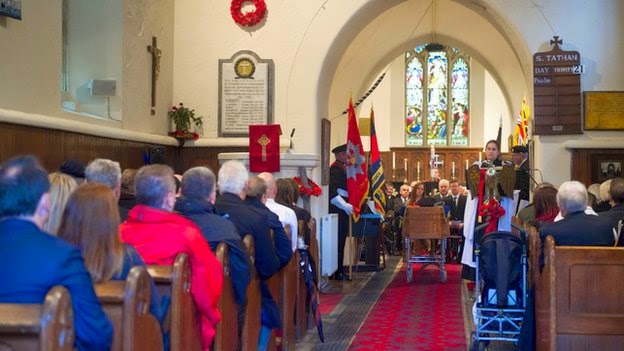 Meanwhile, Britain remains a country of thousands of old men, without friends and family, who know they will receive short valedictions in empty churches after they are gone.
https://www.youtube.com/watch?v=-LOgMWbDGPA
Wednesday, 13 March 2013 :

Labels: The funeral of Harold Morgan