Sir Tim, is a seventy-two year old Fellow of the Royal Society and winner of the 2001 Nobel Prize for Physiology for his work on 'Regulators of the Cell Cycle', https://www.youtube.com/watch?v=I1I-UIyu0jU&t=44m04s who has found
himself the focus of global outrage, after his remarks at  a lunch sponsored by 'powerful, role-model female scientists' at the 'World Conference of Science Journalists' in South Korea. He told his audience :

“Let me tell you about my trouble with girls. Three things happen when they are in the lab: you fall in love with them, they fall in love with you, and when you criticise them they cry” and that he was “in favour of single-sex labs”. He also added, by way of explanation, that he had a reputation as "a male chauvinist". Needless to say his remarks were received in silence.

Tim may have meant to be humorous, but his words were not taken as a joke by his audience. One or two began tweeting what he had said and within a few hours he had become the focus of a particularly vicious social media campaign. He was described on Twitter as 'a clueless, sexist jerk'; 'a misogynist dude scientist' while one tweet demanded that the Royal Society 'kick him out', which before long, it duly did.

It wasn't long before Sir Tim appeared on BBC Radio 4’s Today Programme to apologise :  “I’m really, really sorry I caused any offence.” He had intended his comments to be “light-hearted” and “ironic”. “I did mean the part about having trouble with girls,” he continued. "I have fallen in love with people in the lab and people in the lab have fallen in love with me and it's very disruptive to the science because it's terribly important that in a lab people are on a level playing field. It's terribly important that you can criticise people's ideas without criticising them and if they burst into tears, it means that you tend to hold back from getting at the absolute truth. Science is about nothing but getting at the truth and anything that gets in the way of that diminishes, in my experience, the science." He added: "What was intended as a light-hearted, ironic comment apparently was interpreted deadly seriously by my audience. I'm really, really sorry I caused any offence, that's awful. I just meant to be honest, actually."

Tim's honesty has cost him dear :

*  A statement issued by the Royal Society read: 'The Royal Society believes that in order to achieve everything that it can, science needs to make the best use of the research capabilities of the entire population. Too many talented individuals do not fulfil their scientific potential because of issues such as gender and the Society is committed to helping to put this right. Sir Tim Hunt was speaking as an individual and his reported comments in no way reflect the views of the Royal Society.'

* A more important statement on University College London website said that it could confirm that he had resigned on Wednesday from his position as 'Honorary Professor' with the 'UCL Faculty of Life Sciences', 'following comments he made about women in science at the World Conference of Science Journalists on 9 June'.

* Once unknown, he is now 'known' and will be forever remembered, not for his contribution towards the advancement of science, but his views about the perils of women working in laboratories.

What might explain Tim's outdated views about women ? Where did Tim spend his formative years as a boy, teenage and as a young man, at a time when he was forming his ideas about girls and women ?
He was :

* was born on during the Second World War in 1943 the son of Richard a lecturer in Palaeography in Liverpool and, according to Wikipedia, Kit, who isn't assigned a job or profession but is simply described as 'daughter of a timber merchant'. 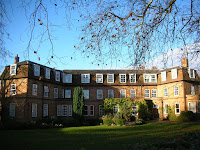 * at the age of eight, was packed off to Dragon School, the renown co-educational school in Oxford and is listed among Wikipedia's 108 'Notable Old Dragons', only six of whom were women.

at the age of he moved to the all boys independent, Magdalen College School, in Oxford (right) followed in 1961, when he was 18, by his undergraduate study of Natural Sciences at the all-male , Clare College Cambridge.

By the time he graduated in 1964, before the 'Swinging Sixties' got fully underway, Tim's formative years had been spent in the company of girls in the boy-dominated Dragon School and womenless Clare College. It was then he started his career in science, where even today, fifty years later, only 13% of workers are women.

His wife, the scientist Mary Collins confirmed his naivety about women when she said : “It was an unbelievably stupid thing to say. You can see why it could be taken as offensive if you didn’t know Tim. But really it was just part of his upbringing. He went to a single-sex school in the 1960s. Nevertheless he is not sexist. I am a feminist, and I would not have put up with him if he were sexist.”

A reminder of the magnitude of Tim's discovery about cell division :