Britain is no longer a country for and says "Farewell" to its old Prince of Darkness, Christopher Lee

Christopher Lee, film actor, well known for his deep, strong voice and imposing height has died at the age of 93.

What you possibly didn't know about Christopher, that he :

* was born in 1922 in Belgravia, Westminster, the son of a contessa and Edwardian beauty and an Army Lieutenant-Colonel, who separated when he was very young and taken by his mother to Switzerland, was educated in 'Miss Fisher's Academy' in Wengen  where he played his first villainous role as Rumpelstiltskin.

* returned to London and his mother married a cousin of Ian Fleming and attended Wellington College, where he won scholarships in classics.

* at the age of 17 in 1939, volunteered to fight for the Finnish forces during the Winter War against the Soviet Union, went on to serve in the Royal Air Force, intelligence services and the Special Operations Executive and retired at the end of the War with the rank of flight lieutenant.

* In, at the age of 24 in 1946, signed a seven-year contract with the Rank Organisation and made his film debut in a gothic romance, 'Corridor of Mirrors' in 1947 and his first film for Hammer, 'The Curse of Fankenstein' ten years later, in which he played Frankenstein's monster, which in turn led to his first appearance as the Tansylvanian vampire in the 1958 film 'Dracula'. 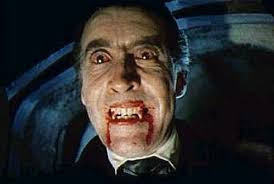 * returned to the role of Dracula in Hammer's 'Dracula : Prince of Dasrkness' in 1965 and with no lines, merely hissed his way through the film and saw his subsequent films as the Count give him little to do, but a good income : http://ow.ly/ObRn7

* in 1966 played Rasputin in 'Rasputin, the Mad Monk' :
http://ow.ly/ObRK0 and had, apparently, met Rasputin's assassin, Yussupov, when he was a child.

* was responsible for bringing acclaimed occult author Dennis Wheatley to Hammer and starred in 'The Devil Rides Out' in 1967
http://ow.ly/ObSbK and played Lord Summerisle in the cult classic, 'The Wicker Man' in 1973, which he  believes to be his best film :
http://ow.ly/ObSKu

* since the mid 1970s, eschewed horror roles almost entirely and in 1974 played the James Bond villain, Scaramanga in 'The Man with the Golden Gun' in 1974. http://ow.ly/ObTeQ and in 1998, starred in the title role of 'Jinnah', the founder of modern Pakistan, which he declared to be, by far, his best performance : http://ow.ly/ObTIz 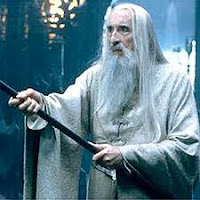 * played Saruman in the 'The Lord of The Rings' trilogy http://ow.ly/ObU0s
and has performed roles in 275 films since 1946 making him the Guinness World Record holder for 'most film acting roles ever'.

* in 2009 was knighted at the age of 87 by another old Prince for 'services to drama and charity' and received the BAFTA Fellowship Award in 2011 : http://ow.ly/ObUwX