Colin, whose career as a photographer on the streets of London spanned 68 years, involved taking photos, both digital and film and processing and printing his work in the traditional way in a darkroom and showed his work in more than 30 exhibitions, has died at the age of 76.

He was born in the second year of the Second World War in 1940, at home, in Northampton Buildings Clerkenwell in Central London an area known as 'Little Italy' and he recalled : “My family all worked in the area so my mother let them know the baby had arrived by hanging something in the window. I think it was just an old shopping bag!”

His childhood home was on the top floor of Victoria Dwellings, built as model housing in the mid-19th century to provide healthy homes for the labouring classes, sited at the junction of Clerkenwell and Farringdon Roads, just a stone’s throw from Hatton Garden, where priceless gems have been bought and sold since medieval times. He recalled : "I grew up in Little Italy. It was full of Italian immigrants, they came from a very poor area of Italy to a very poor area of London thinking that their lives would be transformed." 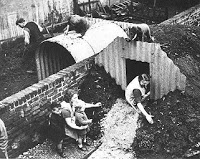 While his father was away as a conscript fighting during the War, his mother and her sister Winifred, stayed in London for most of the duration of the Blitz. “For my safety they did go to Ifracombe, Devon in 1941, but they hated the landlady and so they came back to London saying they’d rather ‘take their chance’.” It was a precarious existence : Clerkenwell had the flimsy Anderson bomb shelters and he recalled : “My granny lived in the middle of  Victoria Dwellings all the families from the top floors, and the families from the bottom would go to her flat. The grown ups would make tea, chat and reminisce. It was that feeling of being together, and being safe.” 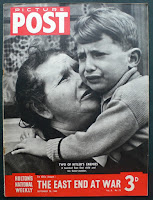 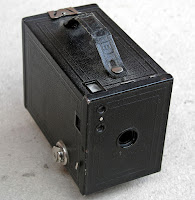 Colin came to photography more by accident than design : "There was no real artistic backup in the family. I already had a box camera, it was just lying there and I just started photographing my mates. There were two things that got me into it : one of my uncles, Patsy, worked in the print and he used to bring magazines home. One of those magazines was Picture Post and I used to love looking through it. So that might have been some sort of early motivation that got me taking photographs of my surroundings. Being stimulated by the pictures of Bill Brandt and Bert Hardy isn’t a bad start."

In 1948 he took a photo of his friends Raymond Scalionne and Joe Bacuzzi leaning against a car in Hatton Garden and from the same time he recalled : "Two of my friends sitting on the steps of Onslow Street which is where we used to play and these were taken in 1948. I was eight years old when I took them and I often get asked by students of photography today "How did I get so close to society's outsiders ?" and to me they weren't outsiders because they grew up with those sorts of people and they were all poor. We were all in the same boat. I never knew anybody who had any money in those days."
https://www.youtube.com/watch?v=YYKVYIch7XM&t=1m55s

He recalled : "There was an Irish guy, lived in the block in Victoria Gardens. I think he was a chaufeur and think it was he who sold them or gave them for a much lesser amount of money than it was worth, this lovely Leica IIIB or IIIA, I can't remember what model it was, this camera which I then used after the box camera so from the sublime to the ridiculous from a box camera to a Leica."
https://www.youtube.com/watch?v=YYKVYIch7XM&t=1m02s

“Then another uncle, Will, a black cab driver, arrived one Christmas with a little contact printing outfit. Contact printing involves a technique where you don’t need a proper darkroom, because the paper is not that sensitive. He just mixed up these chemicals. He obviously knew something about it. We put one of the box camera pictures in a small wooden printing frame, held it up to the light for about 10 minutes and then we processed it and I saw this image coming through in the developer."

Now, at the age of 14 and armed with his Leica camera with its 3.5 Elmar lens, Colin realised "that there was more to photography than just taking pictures of my friends and family, although many of my favourite pictures are of friends and family. Beyond that, people began to tell me they liked my work so I began to take it more seriously.”

There were photos of : "Stoic Mrs Leinweber who lived beneath us waiting at 12.30 to dish out shepherd’s pie and peas with her huge arms” or "my mum cooking or trying on a hat." 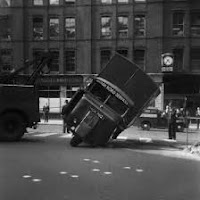 Sometimes things were more  dramatic : "I would hear a bang, get the camera and then look down, see a car accident and take a picture. I took a wonderful picture of a three-wheeled van toppled over in Clerkenwell Road."

He spent so much time on his window perch that : “My mother used to say, ‘Colin! You’ll fall out one day!’ But it was a beautiful perspective from which to see the world, and I never tired of it.”

Colin was 22 when, from the window, he took : "One lovely picture of New Year's Eve 1963. It had been snowing most of the afternoon and it was twilight and I leant out the window and there was hardly anybody an the street and there was one pedestrian crossing and the snow was beginning to settle and it was the last few hours of 1962."
https://www.youtube.com/watch?v=YYKVYIch7XM&t=8m21s

From the window he also took : "The daytime accident picture. There was little boy in one of the vans and we learnt later that he had unfortunately died."
https://www.youtube.com/watch?v=YYKVYIch7XM&t=8m48s

"The night time  accident was amazing because it was a night time exposure and you could see traces of cars and also if you look at the people they're very shadowy. Some people stood still and some moved and the ones that had moved are obviously slightly blurred."
https://www.youtube.com/watch?v=YYKVYIch7XM&t=9m11s 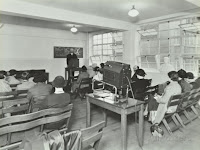 Initially his school days in Little Italy were unhappy : “There were lots of Italians and kids with no clothes or shoes and we would all use the bombsites as vast playgrounds. Then there were the Roman Catholic schools with nuns that knocked the living daylights out of you. I went to one as an infant, but I cried most days because I just hated it.” His secondary modern school was better, although he left at the age of 15 in 1955 without qualifications. At first he had a series of jobs, as a tea boy, then as a runner at one of many press agencies near Fleet Street until, as he recalled : "I had a nice personality, so in my early twenties I worked with the City Literary Institute and Mrs Daley sent me to Media Resources.”

Colin found that his parents didn't share his photographic aspirations and he was sympathetic to their point of view : “They spent their days trying to earn a living, trying to keep us alive." His father, in particular, showed little understanding : "I never really got on with my Dad early on in my life. I was fairly creative and he worked in a pretty mundane, awful job so I was never sure that he got what I was doing.”

Having discovered that he could get time off work to study, he got himself school qualifications and after travelling around Europe in the early 1960s, took a BA in Photography at Westminster Polytechnic and then an MA in 'Photography and Advertising' at the London College of Printing at the Elephant and Castle where he also worked as a media resources technician.

Colin was never a full time photographer, His work was done when, for two hours or so every day, he would walk the streets with his camera, taking photographs of people who interested him. He recalled : "I wasn’t Don McCullin going off to war or David Bailey photographing celebrities. I was quite provincial. I didn’t go south of the river and I didn’t travel. I photographed what I saw, people acting out the drama of everyday life."

A good example of his street work came in 1986 : "This is the corner where I took the picture of mine called 'Comings and Goings' Everybody's about to do something or go somewhere or coming into one side or leaving out of the other side of the frame and there's only one little old lady sitting in the middle, not going anywhere and doing anything. She's got her shoes off and she's sitting there watching the world go by."
https://www.youtube.com/watch?v=YYKVYIch7XM&t=3m23s Colin was philosophical about the popularity of his art : “My sort of pictures people didn’t want to have. Now people have a soft spot for the old days, it’s nostalgia. It wasn’t as good as they think! I took pictures of the threadbare years, the 1950s and the down and outs in the street, but there are still down and outs, sometimes even sitting in the same places. I’m a poor boy from Clerkenwell but just last night I was drinking champagne at the new Leica store at the Royal Exchange where they are showing some of my photographs."

Last year Colin said of London :  "At certain times the city has a stillness and beauty about it, but mostly it is on the move, at times frenetic, exasperating and tiring. But for me it is where I was born and where I grew up and it will always be my home."

"The great photographers are the ones that can pick out from that mass of information can just isolate something  for a moment a second, That's the trick : isolating something that makes a wonderful composition, has something to say."
https://www.youtube.com/watch?v=YYKVYIch7XM&t=12m40s

Some years ago and a few weeks before the death of his father he recorded : “He came to an exhibition at the Morley gallery and he wrote in the comment book: ‘I am very proud of my son, these pictures are wonderful.’ It was so nice to see that.”

Friday, 13 June 2014
Britain is no longer a country for and says "Goodbye" to an old artist-photographer, once 'Laureate of Teenage London' called Roger Mayne
http://britainisnocountryforoldmen.blogspot.co.uk/2014/06/britain-is-no-longer-country-for-and.html