Britain is no longer a country for its old World Cup football champion, Nobby Stiles

I met an old friend for a pub lunch today who has been happily married for almost 50 years and who told me on meeting that he had only realised this morning that the woman who accompanied him to lunch was his wife. Alzheimers is the cruellest of diseases.

Nobby Stiles, the 1966 Football World Cup winner is 74 years old and, like my friend, also suffering from Alzheimers-related dementia. He is also suffering from prostate cancer and was apparently 'very poorly' after missing the recent celebration dinner at Wembley to mark the 50th anniversary of England’s 1966 triumph.

In addition to Nobby, team members, Martin Peters and Ray Wilson, are also battling the devastating illness and have fears their brains were damaged by heading heavy, leather footballs. Ray who is 81, has been battling Alzheimer's since 2004 and Martin, 72, was diagnosed three years ago. Ray's wife Pat has also said she believes the heavy footballs contributed towards her husband's illness. 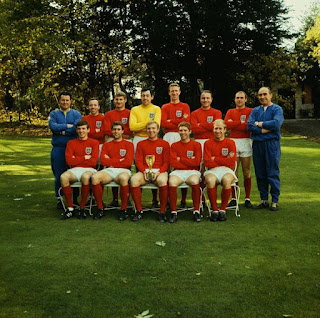 The 1966 World Cup team with Nobby, top left to the right of trainer Harold Shepherdson with Ray Wilson, also on the back row on the right to the left of Manager, Alf Ramsey and Martin Peters in the bottom row on the extreme left.

Former West Brom player Jeff Astle died aged 59, sixteen years ago. At the inquest into his death the coroner revealed he died from the 'industrial disease' of heading footballs. By the time Jeff died, he did not even know he had been a professional footballer, let alone one of the finest of his generation who was known for being a prolific header goal-scorer. At his post-mortem, pathologists discovered 'catastrophic' damage to his brain that would be more expected for a boxer than a footballer and his widow Laraine has since campaigned for the FA to do a study into the impact of heading footballs.

Neuroscientist, Dr Michael Grey, has called for more research into the impact that heading old style leather case balls might have had on the brains of 1960s footballers and has said microdamage to the brain can result in dementia. 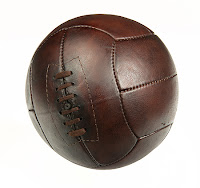