San Serriffe is no longer a country for and says "Farewell" to its greatest publicist and Britain its greatest April Fooler, Geoffrey Taylor

Geoffrey, who has died at the age of 89 was the Foreign Editor at the Guardian in 1977 when for April 1st it produced a 7 page travel supplement on the tiny tropical republic of San Serriffe, 'a small archipeligo, its main islands grouped roughly in the shape of a semicolon, in the Indian Ocean' which was celebrating ten years of independence. Geoffrey was the brains behind what would be recognised, in time, as Britain's greatest journalist April Fool spoof.

If we ask the question : what went into the making of this consummate journalist and prince of April foolers ?  We find that he :

* was born Geoffrey Duke Taylor in Sheffield in 1927, the son of Winifred, a musician and Edward, a teacher of music and maths at Sheffield City Grammar School and having passed the 11+ started to attend the King Edward VII Grammar School in the City in 1938 and continued to attend during the Second World War until he was 17 in 1944, when he attempted to join the Royal Navy, for which he was turned down on medical grounds.

* joined the Sheffield Telegraph where worked for three years before joining the 'Manchester Guardian' at the age of 20 in 1947 as its Foreign News Sub Editor and in the 1950s, after he felt drawn to working in Africa, placed an ad in 'The Times' which was answered by the Mirror Group Newspapers and at the age of 30, in 1957, was dispatched to work at the 'Lagos Daily Times' in Nigeria. 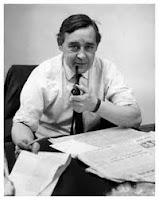 * in 1960, returned to Britain to work at, what was now, 'The Guardian' and after its move to London in 1964, became a leader writer and, with the exception of the USA, had responsibility for the other regions in the world.

* was happiest in dealing with and the African countries he had visited as Foreign Editor the subject of arms control and Ireland, where he could visit the place he was writing about, form close links with some of the politicians at the heart of the peace process and envisage a future political entity which he called 'Iona', the 'Islands of the North Atlantic.'

* on the home front during one of Labour’s leadership battles in the 1970s, wrote a series of leaders in Shakespearean verse that greatly delighted readers who remained unaware of him, the author.

* in 1977 worked on the spoof April fool supplement based on an idea from Philip Davies, an advertising rep who worked on special reports within the advertising department at the paper and produced this kind of advertiser-funded supplement and who later recalled : "I was thinking about April Fool’s Day in 1977 and I thought, why don’t we just make a country up?"

* saw the idea developed by The Special Reports Editor, Stuart St Clair Legge, who suggested the
name of the fictitious country be 'San Serriffe', part typographical pun based on the 'sans serif ' typeface and part credible name for a tropical isle and took over the job of designing the islands, take care of the editorial content and edit the feature. 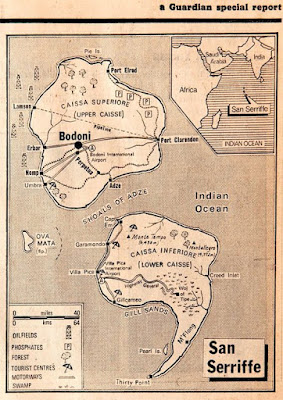 Geoffrey began his introduction, 'Three point key to prosperity,' with :

'To those who have not followed its development at close hand, San Serriffe may be remembered only as a small archipelago, its main islands grouped roughly in the shape of a semicolon, in the Indian Ocean. Until recently, that would have been an adequate description : a punctuation mark, as it were, in a long chapter of oceanic exploration. But fifteen years ago came the phosphate industry, ten years ago the first tourist packages, and five years ago the resource which has added bounteously to its riches : oil.'

Geoffrey invested his islands with further typographical references :
On the island of  Upper Caisse (case), he sited his capital, Bodoni, which was another typeface.
His Pie Island was a referring to a letter press term where type were dropped all over the place.
Port Elrod referred to the Elrod machine which allowed printers to cast metal strips used for spacing type.
The port of Erbar referred to the first geometric sans-serif face,
Port Clarendon referred to the 'slab-serif typeface.'
The town of Perpetua made reference to the typeface designed by Eric Gill, which was classified as a 'transitional serif font'. Eric also gave his name to Gill Sands on the south island.

The small island of Ova Mata referred to 'Over Matter', or type which didn't fit into a column.

Back in the introduction Geoffrey made reference to the pica typographic unit and also to John Baskerville, the 18th century type designer :

'President Pica's emphasis on economic development, which he rightly sees as the best way to enrich the islands, has led to practices which some observers describe as authoritarian and which the Opposition, under the ageing Mr Ralph Baskerville, believes are only temporary.'

He continued that the Government had created 'more wealth for the islanders, particularly for those highly placed in the Administration. By making the islands a tax haven and creating duty-free zones round Port Clarendon and Bodoni all Governments since that of Colonel Hispalis, which took office soon after independence, have attracted much hot and some questionable money to the islands. Once there, it has tended to stay.'

Geoffrey had a lot of fun with the fact that, in terms of education, San Seriffe was 'much in advance of comparable countries, with three geriatric teaching hospitals and a pioneer pre-school psychiatric unit attached to the university at Perpetua. The university itself has begun to acquire an international reputation for its work on thermonuclear fusion and other alternative energy sources.' 'And the schools are attempting a unique synthesis of the old and new so that in addition to mainstream subjects a San Serriffe teenager may well be offered pearl-diving as an ‘A’ level choice.'

Geoffrey oversaw the other articles in the supplement :

'The block vote which resulted in industrial peace' by John Torode, which discussed San Serriffe's unique solution to union/management cooperation in which all collective agreements on the island expire on the same day each year and are personally renegotiated by Antonio 'Che' Pica, second cousin of the President.

'The leader's rise to power' by Mark Arnold-Forster, which discussed how Maria-Jesu Pica, San Serriffe's young President-for-life, came to power following an almost bloodless coup on May 11, 1971.

'Bold expansion in tourism' by Adrienne Keith Cohen, which discussed the many tourist attractions of San Serriffe, including a diverse mix of cultures, modern highways, air-conditioned hotels, and beaches 'from which terrorism has been virtually eliminated.'

'Transposed by the tides' by Anthony Tucker, which discussed San Serriffe's unique geological characteristic : the constant eastward movement of the islands caused by tidal erosion.

'Casting off into unknown wealth' by Victor Keegan, which discussed San Serriffe's transformation from a small agricultural economy into an industrial steel-exporting force to be reckoned with.

'Spiking the cultural roots' by Tim Radford, which discussed the cultural heritage of San Serriffe's indigenous people, the Flongs, focusing on their unique celebration, the 'Festival of the Well Made Play' during which 'local committees of Flongs and islanders of European extraction combine enthusiastically to mount the complete cycle of plays by William Douglas-Home in English, Caslon, and Ki-flong.''
Sidebars in the supplement included 'Guide to the Republic' and 'Landmarks in History' which offered brief details about San Serriffe's demographics, geography, and history.

Philip Davies contacted the advertising agency J Walter Thompson to fill the advertising space in the supplement and clients were very enthusiastic about the hoax with four out of the seven pages taken up with advertising. Themed adverts for insurance brokers, soft drinks and fine bone china accompanied the spoof stories. Kodak ran a competition asking for amateur photographers’ pictures of San Seriffe, for an exhibition to be mounted 'at this time next year', with the line 'If you’ve got a photograph of San Serriffe, Kodak would like to see it' with entrants required to call Kodak 'before noon today.'

Apparently, when on the morning of 1 April Geoffrey appeared in the office canteen, the whole place broke into applause and he promptly retreated. During the day the report generated a huge response and the papers phones rang repeatedly as readers sought more information about the idyllic holiday spot,

Geoffrey retired in 1988 at the age of 61 and left Britain with his second wife, Janet and settled in her native New Zealand where they lived in Christchurch for the rest of his life, interspersed with infrequent visits to Britain. By the time of his death he had long ceased to be a reader of the Guardian, a paper which had changed far too much for his taste.