The Government has announced that gay and bisexual men who are dead and were convicted of the repealed 'Sexual Offences in England and Wales Act' are to receive posthumous pardons. In addition, the 15,000 of old gay men who are still alive of the 65,000 convicted under old sex offence law are also eligible for a pardon.

The Liberal Democrat  peer Lord Sharkey, who proposed the Amendment to the 'Policing and Crimes Bill,' said : "a pardon is probably the best way of acknowledging the real harm done by the unjust and cruel homophobic laws, which thankfully we've now repealed. And I do hope that a lot of people will feel exactly the same way".

Ninety-three year old George Monatague does not feel the same way. He has said unequivocally that : "I want an apology ... to accept a pardon means you accept that you were guilty."

George, who was convicted in 1974 of  'gross indecency' with a man has said  : "I have lived my life with a conviction for gross indecency hanging over me. I see now they are giving pardons. I don’t want a pardon. I want my conviction to be squashed, struck off. I was entrapped by police at the time and pleaded guilty to avoid publicity. I just want to end the final days of my life having no criminal conviction and to see the majority of people in the country become gay-friendly.”

After the Second World War, George was still living in Hitcham where he had lived as a boy and now ran an engineering business employing 40 people. In his own words : 'I was a scout commissioner and a pillar of the community.' He had also served King and country in the Royal Navy during the Second World War, and fathered three children to Vera, who he married and shared with the secret of his sexuality.

His life changed when in 1974, when he was 50 and travelled to Slough for the day because there was no one else of his 'persuasion' in Hitcham and he went looking for company. In the absence of either a gay scene or bars, he gravitated to 'cottages', public toilets.

The one he chose was empty, apart from one man in a cubicle, George went into the adjoining cubicle and locked the door. He found a hole in the wall between him and the man which indicated to him that it was : 'a sure sign it was a gay haunt'. He looked through the hole and on finding the man was much older than him, he 'blocked up the hole and waited for him to go, but instead he pushed the paper out and attempted to put his penis through. At that moment there was a scuffling outside and a police officer craned over the top of the door. I was doing nothing; I hadn’t invited any contact from the other man, but the timing was awful. We were both arrested and taken to the police station.'

Under police questioning, a 'queer list' was produced with George's name on it. He believed that the police had 'made it their business to find out the name of anyone locally who was gay. They’d do it by arresting a young gay boy and threatening him until he gave them as many names as possible.' He was charged with 'Gross indecency' and was sent for trial. He employed a solicitor and counsel, which cost a lot of money and pleaded 'not guilty'. George was, however, found guilty of the offence and given the statutory fine. He thus gained a 'criminal record' which has remained with him for the last 42 years even though, in 2004 the 'Sexual Offences Act' repealed the offence of 'Gross Indecency' from statute book.

He found that there was no story in the press about him, despite me being found guilty. He had a few contacts on the local paper because of his community work and they were kind. However, he found that : 'There was suspicion in the scout movement, which made me angry and upset. I know the word “paedophile” was used, and that was humiliating. I resigned, which hurt a great deal.'

George was fearful it would come out and although his wife knew he was gay when she married him and 'was a wonderfully supportive woman',  no one else knew ; 'not friends, not my children. I took it in my stride. I came to terms with it.'

George went on to have several gay relationships subsequently and today lives with his long-term partner of 20 years. He does, however, remain :  "very angry" about what happened to him : "I served my country during the Second World War. I don’t want a pardon because I’m not guilty. I’m angry with the Government and the entire establishment throughout the 20th century. They need to apologise to the gay community on behalf of their predecessors and the police need to apologise for the way they enforced the law. There are many men out there with this stigma hanging around their neck."

He has said : "If I get an apology, I will not need a pardon" and there "never should have been an offence of gross indecency. It didn't apply to heterosexuals. Heterosexuals could do what they liked, in the doorways, in passageways, the back of their car. It only applied to gay men. That's not right, surely?"


George's anger has not stood in his way of acting as a positive force in the Gay Community and his current passion is to see a top of the range care home for older gay people opened and he is presently working on a self financing proposal for gay men with money to commit to the project.

George is still inspired by the lessons he learned as a poor boy living with his family in a tied cottage without either bathroom or toilet on a large estate with a big house owned by Colonel Handbury in Buckinghamshire in the 1920s and where his ex-policeman father was a gardener and his mother, the laundress. It was here that he dug up weeds with the other children to earn some pocket money and :
'It made our fingers sore, but I think it taught me a lesson that would be with me all of my life : if something needs to be done, then best get on and do it.' 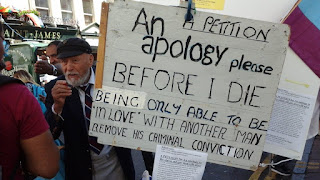 Labels: No country for George Montague