Britain is no longer a country for and says "Goodbye" its much loved, old TV comedy sketch writer, Jimmy Perry 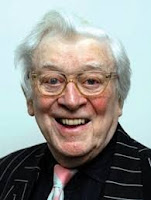 He was born in Barnes, London in 1923 and became fascinated with the variety theatre at an early age, where is heroes were Arthur Askey, Ted Ray and the 'Crazy Gang'. When his father asked him : "what do you want to do when you leave school ?", Jimmy told him that he was determined "to be a famous comedian" to which his father replied : "You stupid boy!"

Jimmy joined the 'Watford Home Guard' at the start of The Second World War at the age of 16 in 1939 and later based the 'Dad's Army' character, mummy's boy 'Private Pike', on himself and has said of his Mother that : "She didn't go so far as making me wear a scarf, but she came pretty near".

Jimmy had drafted into the Army to fight in the Second World War at the age of 18 in 1941 and sent to Burma, where he joined the Royal Artillery Concert Party which entertained the troops and his experiences informed 'It Ain't Half Hot Mum' :
https://www.youtube.com/watch?v=susYm-fdZq4&t=0m09s

After the War, he trained as an actor at RADA, spending his holidays working as a Redcoat in Butlin's Holiday Camps which inspired him to create 'Hi-de-Hi'
: https://www.youtube.com/watch?v=1ADwLN586vw&t=0m07s

In 1954 at the age of 31 and for the next 11 years he ran the Palace Theatre, Watford, a repertory company which produced a different play or show every week and whilst working for Joan Littlewood at the 'Theatre Workshop' in Stratford East, had the idea for a show based on the Home Guard he called 'The Fighting Tigers' which became

'Dad's Amy' and recalled his favourite episode where Private Godfey played by Arthur Ridley, who in reality had been badly injured in the Battle of the Somme in the First World War, announced that he was a conscientious objector : http://www.youtube.com/watch?v=aJTQ4qW-ePc

His co-writer, David Crofts, who died in 2012 recalled his favourite episode as the one entitled 'Mum's Army' :
http://www.youtube.com/watch?v=BEGusOkY7hE&NR=1

At the end of the 1970s, he became involved as presenter in a BBC series called 'Turns', dedicated to films of nearly forgotten music hall acts of the 1930's and 1940's and took time to deal with his hero Bud Flangan : https://www.youtube.com/watch?v=-PqjOv2J6eg&t=23m19s

Jimmy published his autobiography,'A Stupid Boy' at the age of 79 in 2002.