Britain says "Farewell" to an old soldier called Stan Hilton, the last of its sons who upheld its name fighting fascists in the Spanish Civil War

Stan, who has died at the age of 98 was the last surviving Briton who fought in the legendary International Brigades in the 1930s, during the Spanish Civil War, was born in Newhaven, Sussex, during the First World War on on 31 December 1917.

As a teenager he joined the Merchant Navy and was nineteen when he jumped from his ship, the S.S. Pilson in Alicante in November 1937, after hitting an officer who’d been pushing him around. On his own admission Stan said : "I liked mucking about. I didn’t like being ordered around." 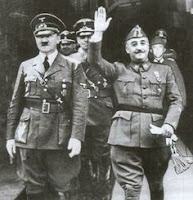 A year before this, the Spanish Civil War had started in July 1936 when General Francisco Franco and other army officers launched a fascist-backed coup against the democratically elected Spanish Republic. Franco’s rebels received overwhelming help from Hitler's Nazi Germany and Mussolini's Fascist Italy in the form of troops, aircraft and armaments.

It was now that Stan made up his mind to join the War fighting on the side of the Government against the Fascists. He later said : "The Spanish people needed help. It was the right thing to do."  Unfortunately Stan's Government in Britain didn't see it like that and with the other Western democracies enforced an arms embargo on the Spanish Republic, effectively condemning it to defeat : https://www.youtube.com/watch?v=bvm5AGvV1f4&t=8m24s

We know from documents held in London and Moscow that he made his way to Albacete and enlisted with the 'British Battalion' of the 15th International Brigade and, after a period of training, saw action that winter around Teruel. Stan recalled : ‘It was freezing. I was always bloody cold.’  In fact it was the worst Spanish winter in twenty years and the battle was one of the bloodier actions of the War, with the city changing hands several times, first falling to the Republicans and then retaken by the Fascists after heavy artillery and aerial bombardment. With Franco's use of his superiority in men and materials it was to prove be the decisive battle of the War, The writer, Laurie Lee, who also served in the International Brigade said :

'The gift of Teruel at Christmas had become for the Republicans no more than a poisoned toy. It was meant to be victory that would change the War; it was indeed the seal of defeat.'

It is little wonder that, in the spring of 1938, Stan's Battalion was routed as Franco’s forces, aided by troops sent by Mussolini and Hitler’s Condor Legion, swept through Aragón and Catalonia.

With the Republican army in disarray and communications having broken down, Stan was caught up in the chaotic retreat and ended up swimming across the River Ebro to evade being captured by Franco’s soldiers. Stan later reflected that : ‘It was every man for himself.’  David Leach recorded the experiences of other British volunteers at the river for his 2001 film, 'Voices from a Mountain' :
https://www.youtube.com/watch?v=bvm5AGvV1f4&t=653s&t=10m33s

Stan reached Barcelona and in March 1938, with the British Captain’s permission, he boarded the SS Lake Lugano at Barcelona and sailed for home. He was still only 20 years old. At the time of his death he was the last of some 2,500 volunteers from the Britain who joined the International Brigades in a War in which 526 of them, that's 20%, had died before Franco's victory in 1939.

In 1956 at the age of 39 Stan left Britain and emigrated with his family to Australia, where he worked mostly as a tiler in the building trade. He died in a nursing home in Ocean Grove, near Melbourne.

Announcing the news of Stan's death, the London-based 'International Brigade Memorial Trust' said it marked the end of an era and its Secretary, Jim Jump said that Stan had helped write a "proud chapter in British 20th century history" and added : ‘While their own government looked the other way and refused to go to the aid of a fellow democracy, the men and women from Britain who joined the International Brigades did something to salvage their country’s honour and reputation. Stan and the other volunteers will go down in history as the first British soldiers to confront Hitler and Mussolini on the battlefield. In doing so they also set an unequalled example of international solidarity and anti-fascism.’ 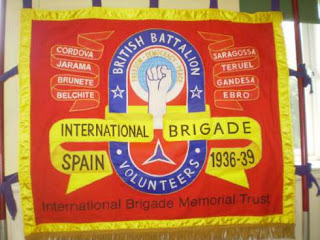