Britain is no longer a country for and says "Thank you and Farewell" to an old, quintessentially English actor and 'lovely human being' called Moray Watson 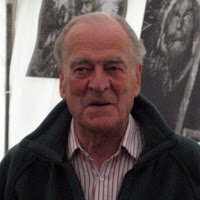 Moray, who has died at the age of  88, had a voice which, with its perfectly enunciated diction, exuded a natural confidence, which probably explains why, over his 60 year career, he played a succession of authority figures, mostly military with the odd police officer and judge thrown in. Moray was always there, lending a secure and trustworthy presence to either the film, theatre or television production he graced with his presence. To his fellow actors on either the stage or set he was clearly a pleasure to work with.

Catherine Zeta-Jones, who played with him in 1990s 'Darling Buds of May,' said that he was a "true gentleman" and "the wonderful Moray has passed away. We shall all miss him. He was and is a national treasure,"

Gyles Brandreth tweeted : 'Sad news. A fine actor, Moray Watson, has died aged 88. From Compact to the classics, he was a class act. And a lovely human being. RIP.'
He told the Press Association : “What was extraordinary about him was his versatility. From a soap like Compact, to making a movie alongside Cary Grant, Doctor Who and the Darling Buds – he really was a safe pair of hands and a calming influence to have on stage and on set. But he was also tremendously funny. People loved him because, as a person, he was very witty, very droll. He had a fantastic sense of humour and he would bring out these wonderfully amusing anecdotes, including an excellent impression he used to do of Cary Grant. He was also extremely kind to people and he was, in every sense, a gentleman."

Born into a genteel family in 1928, in Sunningdale, Berkshire, the son of Jean and Gerard, a ship broker and was packed off to Eton in 1939, the year that the Second World War broke out and was there when his father was killed fighting in Belgium. After the War, he served his two years national service in the Army in the Northamptonshire Regiment and reached the rank of captain. Eton, followed by his Army service must have left an indelible print on young Moray and gave him the hallmarks we all recognised in his stagecraft.

Having made up his mind to be an actor, he went to London to study acting at the Webber Douglas Academy of Dramatic Art and made his first professional stage appearances with the Nottingham Repertory Company and stepped onto the London stage for the first time at the age of 27 in 1955, when he appeared in 'Small Hotel' at the St Martin’s Theatre. He played Trevor Sellers, a novel-writing butler, in 'The Grass is Greener' and when Stanley Donen directed the film version two years later he reprised his role acting alongside Cary Grant, Deborah Kerr, Robert Mitchum and Jean Simmons.

It's a big thanks on behalf of the millions of people who have enjoyed Moray's acting on the stage and large and small screens over the last 60 years.

Moray reminds us how he spoke to us as :

Peter Marsh in The Quatermass Experiment in 1953

Ken Shield in The Saint in 'The Imprudent Politician' in 1964 in Spanish here, but you get the idea

Lord Collingford in Catweazle in 1970

Colonel Winter in Upstairs, Downstairs in 'A Pair of Exiles' in 1972

Barrington Erle in The Pallisers in 1974

Major Desmond Morton in Winston Churchill: The Wilderness Years in 1981

Sir Robert Muir in Doctor Who - Black Orchid in 1982

Commander Hawksly in Minder in "Goodbye Sailor" in 1984

Roger Cranley in Worlds Beyond in 'The Haunted Garden' in 1987

Sir Donald Stuffy in Norbert Smith – a Life in 1989

Major Harriman in A Murder of Quality in 1991

Henry Nugent in Haggard in "Orlando's Revenge" in 1992

The Stranger in The Vicar of Dibley in "Animals" in 1994 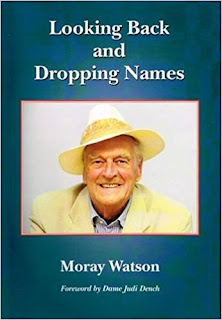