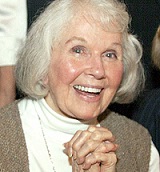 What you possibly didn't know about American actor and singer Doris, who has died at the age of 97, that she :

* was born Doris Kappelhoff in 1922, in the Cincinnati, where her father was a music teacher and choir master and her grandparents German immigrants.

* had a car accident in 1937, which damaged her legs and curtailed her prospects as a professional dancer and while recovering, took singing lessons and at 17, began performing locally.

* had her first hit recording, 'Sentimental Journey', in 1945, which soon became popular with demobbed soldiers from The Second World War.

* in 1953, appeared as 'Calamity Jane', which I saw at the Gaumont Cinema in Lewisham, London with Mum and Dad when I was 6 years old.

* also sang : 'The Deadwood Stage' and 'The Black Hills of Dakota'

* starred in Alfred Hitchcock's 'The Man Who Knew Too Much' in 1956 and sang "Que Sera, Sera (Whatever Will Be, Will Be)" which won an Academy Award for 'Best Original Song' and became her signature song.

* caught up with the sexual revolution with had her last major hit in "Move Over, Darling" from the film in which starred with James Garner, which I saw at the Gaumont Cinema in Lewisham with my girlfriend when I was 17 years old.
Britain in 1964 with

* over the course of her career, appeared in 39 films, was ranked the' biggest box office' star for four years in the 1960's and in 2012 was ranked sixth among the top 10 box office performers, male and female, of all time and released 29 albums.


* was an outspoken animal rights activist after her retirement from show business.

The way you sigh, has me waving my conscience bye-bye.
You can call me a fickle thing,
But I’m practically yours forever, because

The way you sigh,
Has me waving my conscience good-bye.
You can call me a fickle thing,
But I’m practically yours forever, because