Brexit Britain, though convulsed in political crisis, is still a country where old men of Merit can have a peaceful luncheon with their Sovereign at Windsor Castle 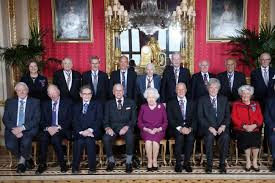 These old men and women were gathered together this week to sit down to luncheon with the Queen and the Duke of Edinburgh at Windsor Castle. Apart from the fact that they are all white, they have something else in common : they are all recipients of the Order of Merit. The decoration, has been awarded to them in the past by the Queen as citizens who have provided service of 'exceptional distinction' to their country in the Arts, Learning, Sciences and other areas, such as Public Service. The Order is restricted to a maximum of 24 living recipients from the Commonwealth realms and a limited number of honorary members.

If the Duke of Edinburgh and the Queen and the Prime Ministers of Canada and Australia are subtracted, the remaining 14 old Brits have a collective age of 1117 years.

One of the most memorable events of the meeting was when the royal couple were photographed speaking with their guests and the Queen commented on the recent arrival of her great-grandchild, Archie. "Life is good for Your Majesty?" asked Jean Chrétien. "Yes, thank you," she replied. "Another great grandchild" he continued. "How many of them have you got now?"
"Eight", she said.

Labels: Old man of Merit have lunch with the Queen