Of the four nations which constitute Britain, it is in England that 1.3 million elderly men and women over the age of 65 live in areas in where there are no care home beds. A study commissioned by 'Age UK', conducted by 'Incisive Health', an independent health consultancy firm set out to explore key characteristics and outcomes of the social care systems operating in Italy, Spain, France, Germany and Japan alongside England. It bore in mind the fact that creating a sustainable social care system fit for a rapidly ageing population is a challenge in every one of these countries, which none has completely overcome.

Having said that, it found that the other countries featured in the report have grasped the nettle and implemented significant reforms during the last 25 years. For example, Germany began to modify its system in 1995 and Japan in 2000. Over the same period, despite :

It is notable that old men and women in England have to face a stricter means test than the other countries which dictates that, if they have :

* savings or assets above £23,250, they have to pay all the costs of their long-term care.

* savings and assets below the £14,250 threshold, they will still be expected to pay a contribution towards the costs of their care through a deduction from their State Pension.

Other countries have less harsh and more progressive systems :

In Germany : a non-means tested basic level of support.
In Japan : capping the level of co-payment for all at 10%.
In France : a more generous and gradual means test.

Furthermore, in recent years and before Brexit reared its ugly head, England’s harsh means test has become increasingly less generous because capital thresholds at £14,250 to £23,250 have not changed in nearly a decade. This means that if the value of the means test had merely risen in line with inflation the upper level would be £25,559 today which is effectively a 9% stealth cut over the last ten years.

Caroline Abrahams, Charity Director at 'Age UK' said : “Sadly, this new report shows that England has been left behind in the race to update the funding of care for older people, compared to some other similar nations. The reality is that an entire generation of older people in England has lost out, given that Germany embarked on care funding reforms in 1995 and Japan in 2000. Here, we have had to make do with a succession of consultations gathering dust. It is crucial that the forthcoming Social Care Green Paper isn’t yet another failed exercise."

The Report also highlighted the fact that :

* more than one in four postcode areas in England, that is 2,200 out of around 7,500, had no residential care provision.

*two-thirds, that is 5,300, had no nursing homes, for people with more acute problems, in other words, those who lived in these areas risked being unable to get the support they needed.

* staffing was a particular problem in those areas of South-East England which high numbers of EU staff in the sector, many of whom have left or are planning to leave, as a result of Brexit. 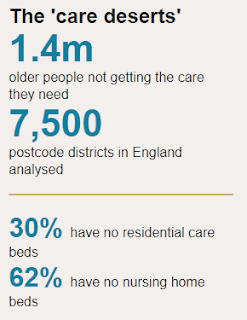 Caroline said the research showed how “chaotic and broken” the market for care had become after years of underfunding : “If the awful situation set out in this report does not persuade our government to finally get a grip and take action, I don’t know what will.”

Sadly, the fact is that a Brexit-obsessed Government is most unlikely to get a grip and old people in need of care in England will remain a low priority.

Labels: In need of care homes