Britain is no country for old model railway enthusiasts from Market Deeping Model Railway Club, but is a country with an old rock star enthusiast called Rod Stewart 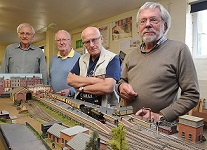 Market Deeping Model Railway Club based in the market village of that name in Lincolnshire has held its annual model railway show at Stamford Welland Academy in Lincolnshire for the last twelve years and this year was to be no exception. After months of planning the old enthusiasts Peter Davies, Colin Brown, Bill Sowerby and Mick Quinn assembled their layouts in the school sports hall on Friday 17th May, ready for the show on Saturday, with between 500 and 600 model railway fans expected to travel from far and wide to enjoy to enjoy it.

Many exhibits featured dozens of tiny, hand-finished components and had taken hours of preparation and a layout called 'Helmthwaite and Chapel Lane', which had been constructed over a period of 25 years was to be the contribution of the St Neots Model Railway Club.

With the exhibits in place they all left the school looking forward to opening their show the next morning, but the school’s alarm was triggered at about 3.50am and when the police arrived shortly after they found and arrested three boys aged 15 and one aged 16. Apparently, they had broken into the hall after attending a vodka-fuelled pre-GCSE exam party and, after a football had been kicked, breaking one of the exhibits, they had launched a rampage on the rest, with model trains and equipment thrown through basketball hoops for good measure. 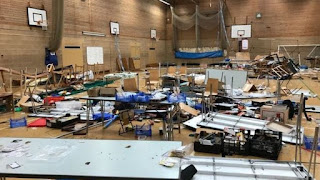 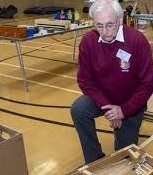 Peter Davies, the seventy year old chairman of the club, who has been building model trains for 60 years, said : "Imagine our horror and grief when we were greeted by this scene of absolute devastation on the morning of 18th May 2019. We are devastated and distraught. It’s heartbreaking. There were grown men there in tears because of what had been done and I admit I was one of them. Models that were made over years were trodden on and thrown around. It’s a total wanton destruction of the highest order. I’ve never experienced anything like it. A hurricane would have done less damage.”

"Can you imagine your life’s work wrecked ? One guy spent 25 years on his work and it’s wrecked, it’s just horrendous. They left it like a bomb site. We will never have the time to build the sort of layouts again, that’s where the anger comes from. Some of the models were irreplaceable."

Although, one locomotive alone was worth around £8,500, Peter said that money could not replace "precious time lost" and "some of us simply don't have that amount of time left in our lives. It takes years to put together the models. My own layouts, some I've been working on for 10 years. The owners of Helmthwaite are absolutely distraught by what's happened."

A crowd funding page was set up and in next to no time, their modest fundraising target of £500, merely to cover their losses from what was supposed to be a charity exhibition with Peter saying : "Some of the models on display are irreplaceable and whilst money cannot possibly replace the hours of painstaking effort that has been so wantonly destroyed, we would ask that you make a donation, no matter how small, to help us get back on our feet."

Donations poured in from as far afield as Australia and New Zealand and by lunchtime, lifelong model railway enthusiast and 74 year old rocker Rod Stewart had been in touch to say he was adding £10,000 to the kitty. The fund has now has now received almost £90, 000 in donations and Peter said the club had been overwhelmed with offers of support and he thanked wellwishers for their help.

Rod, who had built up his own 30.5m  long model railway at his U.S. home in Beverly Hills said : “I was absolutely devastated to hear that vandals had destroyed what was to be a lovely show by the Market Deeping Model Railway Club over the weekend. The collection was priceless and I am donating £10,000 to help compensate those affected and asking fellow enthusiasts Jools Holland, Roger Daltrey and others to do the same. It took me 23 years to build my model railway, so I feel their pain.”

Professional railway modeller Tony Wright, who is an honorary member of Market Deeping, said he had never come across such "mindless vandalism" and "railway modelling is an ageing hobby. It's a sort of a return to a passion of something you did as a child, when you're retired and the children have left home. Most members are in their 70s and it doesn't necessarily matter what the value of the model is, it's the time taken to make it that's impossible to replace." 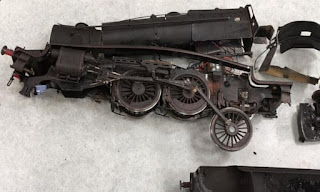