Britain is a country where old men are either : "over the hill, old fuddy duddies" or "geriatric old codgers, who are past it"

The University of the Third Age, the U3A, is an international movement whose aims are the 'education and stimulation' of mainly retired old men and women who are in the the 'Third Age of Life'. There is no universally accepted model for the U3A. It originated in France as an extramural university activity. This intellectual model was significantly modified in Britain in the 1980s, where the emphasis has been on sharing, without formal links to traditional universities. Many English-speaking countries have followed this 'geragogic' model, whereas continental European countries have mostly followed the French model.

The British U3A has a membership of 166,000 in almost 600 local U3A groups and it divides roughly into one old me to every two old women. Sam Mauger, the Chief Executive has recently been in the media talking about research the U3A carried out about the language used towards old people in Britain.Its survey was completed by by over 2,000 members and the general public and as a result of the findings she said : 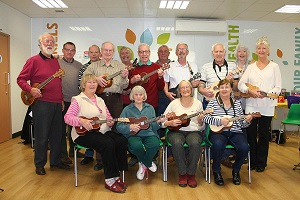 “Our members are vibrant, young at heart and have much to offer. They are not the stereotypes represented by these words. We want to
challenge the preconceptions around ageing. Our members want to achieve in life, be active and keep experiencing new things". 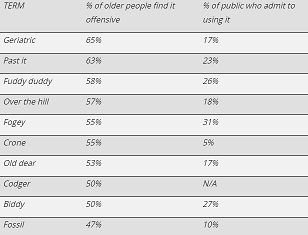 Two in five of those questioned (43%), said they have been "on the receiving end of patronising language in relation to their age" and a quarter (28%) said "certain terms used about them are outdated". Almost two in five (37%) said they had been "addressed with names which are ageist".

Respondents also said that these terms are commonplace in TV programmes and social media and are even used regularly by members of their family. Many say they simply do not feel old enough to have these terms thrown at them but the most common reason for disliking such sayings is because "they are not an accurate representation of older people today".

Invited to share their stories of patronising language, individuals said :

“A neighbour sometimes uses the phrase 'old man syndrome' if she spots a mark on my clothing before I do. It sounds as if she is accusing me of dribbling, which I do not”.

“I was 68 and had a medical problem and the doctor said I "had to attend the 'Geriatric Department"”.

“I often get the comment, "Bless you", when talking to people, giving the impression it is amazing I still have opinions”.

“It is disgraceful that the term 'OAP' is still used. Why should someone be labelled according to whether they receive the state pension? Many still work as well!”

Of the members of the public questioned, over half (53%) admited to regularly using words that were deemed patronising by older people. Nearly a third (31%) confessed to using "fogey" about an older person, while over a quarter (27%) have used "biddy" and 1 in 5 (18%) used the term "past it" to describe old people. A fifth of people even said they'd called someone "Grandpa" or "Grandma", despite not being related to them. Having said that, many said that these terms are often not meant to be patronising and are used because "it’s just banter" (43%), "to be friendly" (38%) or simply because "it’s widely used language" (35%).

Clearly, that is not the way it is seen by the old men and women who are the recipients.