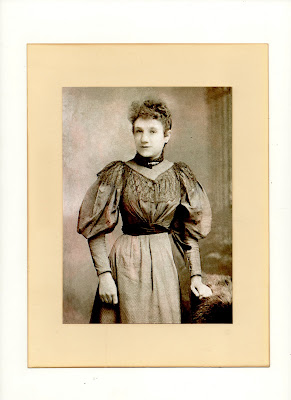 This a photo of my Granny, Beatrice, Elizabeth, Charlotte Lefevre as she was at the age of 18 in 1896. The occasion was her 'coming of age' and putting her long hair up in a bun and fixed with clips. She kept it long and clipped till the day she died, at the age of 90 in 1968.

As a boy, I loved her dearly. I once said to her : "What would you do if you won a million pounds,Gran ?"
Without hesitation she said : " Give it away to poor people."

She was married at 18 and had her first child at 20. She was then consistently pregnant every 2 or 3 years until the birth of her last son in 1919 when she was 41. In all she produced 10 children, 9 of whom were boys and the single girl, who survived childhood was my Mother. As a family, they lived just above the poverty line, with my Grandfather working as a 'carter' delivering jam in jars by horse and cart for the Robinson factory at Woolwich.

She was born and brought up in the London Borough of Southwark on the south bank of the River Thames. She was 10 years old when the serial killer, 'Jack the Ripper' was killing prostitutes across the River in Whitechapel. She was 23 when Queen Victoria died, 36 when the First World War broke out and her eldest son lied about his age and joined the Army at 16 and 61 when the Second World War broke out. She outlived 5 of her own children.

This was Southwark High Street when she was a girl. In those days the old and poor in Southwark who had no income and no family to care for them were forced into the parish workhouse.
This was a grim place where the inmates were segregated by sex, placed in uniform and institutionalised.

Here, there was neither dignity nor respect for the elderly. 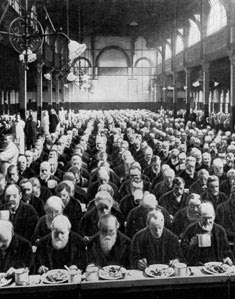 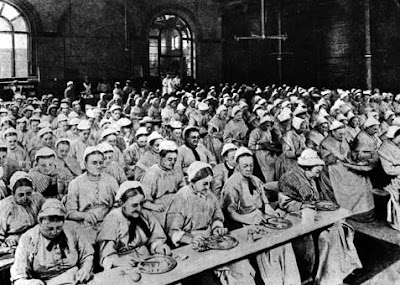 The granting of old age pensions alleviated poverty in old age for many when they were started for the over 70's in 1908. However, workhouses themselves were not abolished until 1930 and my Granny was 52.

Fast forward to Southwark in 2009, 131 years after my Granny was born there.

A report by an independent regulator has found that Southwark is one of 8 of the 140 local government authorities, which in their care homes are failing to provide 'dignity and respect' for the elderly people who rely on 'home help' and 'care home' places. It fails fail to provide consistent care and its staff are not up to scratch.

The Government 'Care Services Minister', Phil Hope said : “It is unacceptable there are a small number of areas where services are under-performing. There shouldn't’t be a postcode lottery".

The report raised fears that the recession will force councils to cut spending on the 300,000 elderly care places they provide in Britain today.

The findings follow allegations last year from the 'Alzheimer's Society', that many residents with dementia get no more than five minutes of attention from staff each day.

The pressure group 'Age Concern' condemned the inadequacy of many homes. Spokesman Andrew Harrop said: "It's not acceptable that ratings for care homes for older people are lagging behind homes for younger groups".

It seems that Britain is a country where there have been big changes in the deteriorating behaviour of the young and continuities in the poor and shoddy treatment of the old.