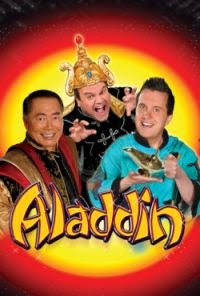 I went to a panto in Chatham, in the County of Kent on Monday evening, to see 'Aladdin'. It was magic. In the audience were the kids and their 'mums' and 'dads' and 'grandpas' and 'grandmas'. Three generations about to enjoy, as thousands upon thousands, had enjoyed in the hundreds of years before them.

Of course, the script had a modern twist, but the story was basically the same with the 'good', but poor Aladdin, falling in love the Emperor of China's daughter.

The casting was inspired, with 'Aladdin' played by Phil Gallagher who all kids who watch the Ceebebies Channel known as, 'Mister Maker'.

Lastly, George Takei from 'Star Trek' as the Emperor of China.

I've put this 'cheerful' posting on my blog at the suggestion of the old boy who was sitting next to me in the theatre balcony, who kept on nudging me with his elbow when Aladdin came on the stage.