Britain is no country for old men who either, shop in Tescos in icy weather, or ride in Eurostar trains to France 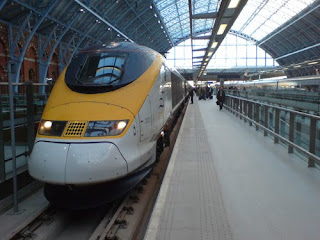 The recent snow in North Kent has meant that the pavements are dangerous and icy. I thought that, if I drove to my local Tescos, all would be well. A company which prides itself on 'customer care' and made £3,130,000,000 profit last year, would have my interest at heart and make my parking and my walk to the supermarket 'safe'.

The message from Tescos was clear : 'If 'you' want to shop here, you sort out 'your' problem. 'Customer Care' at Tescos, what a laugh.

Driving back from Tescos along the slippery road to my house, I caught the guy behind me in his car on his mobile phone and driving one-handed. The Sun was very low in the sky, as it is at this time of year. I put the visor down. So behind me, I have a man driving up an icy road, with the sun in his eyes and one hand on the wheel.

Meanwhile, my local radio station tells me that the snow and ice has created problems on the M 20 - a major motorway and that people have to spend 11 hours in their cars, obviously with the engine running to keep themselves warm. The temperature today did not get above 0 degrees.

In addition to that, I hear that 2 Eurostar trains broke down in the Channel Tunnel and one was without heat and light for 10 hours. I can't imagine what in particular, the old and young and the claustrophobia went through.

Eurostar explained everything by saying that,the trains leaving the very cold air outside the tunnel and encountering the warmer air in the tunnel had created problems. Come on now, this is supposed to be 'state of the art' technology and Britain in 2009.

Labels: Britain in the snow