Britain's lonely old men "take heart", you have a champion in Esther Ranzen and a salve in her Silver Line 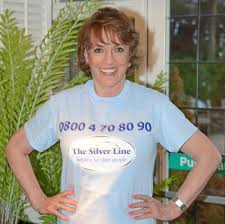 At the end of 2014 Esther Ranzen launched 'The Silver Line' which aims to help lonely old men and women by giving them a volunteer to talk to and on tap 24 hours a day and guide them to activities and organisations which could help them.
https://www.youtube.com/watch?v=-ZYIKe58lfk


Esther, who was given £5 million to launch Silver Liine, said she understood the challenges of getting funding for a new charity, having launched Child Line in 1986, which now takes more than a million phone calls a year giving free counselling for children to discuss abuse and neglect.
She said: “The Silver Line is hugely grateful to Big Lottery Fund for enabling us to launch in time for Christmas, for many older people the loneliest time of the year. The Fund has recognised that millions of older people are lonely some or all of the time, but the loneliness carries a stigma which makes it impossible for them to ask for help.”

Six months after launch and last week, 'The Telegraph' carried an article entitled :
Esther Rantzen: Britain is too busy to speak to older people.
She said :

“The shocking fact is that Britain has become too busy to find time for our older people. Even our doctors, our carers, our high streets and our families fail to recognise that what older people need is time to talk, time to listen, time to value them. Silver Line callers say that being encouraged to ring The Silver Line made all the difference.”


Since the launch her charity has received more than 100,000 calls from lonely old men and women :

* most of whom lived alone with more than half  saying that 'they had no one else to speak to other than the helpline.'

* nearly half of whom often spent more than one day a week without talking to anyone.

* more than one in 10 of whom often spent more than a week without having a conversation.

* more than two thirds of whom said they were reluctant to ask their families for help because they did not want to be a 'burden' .

Esther said the Silver Line was having a “transformational” effect on thousands and had highlighted a “huge and unmet need”.