Bernard Jordan died in hospital aged 90 on December 30th – six months after he captured the nation’s hearts when he travelled to the June D-day events in Normandy wearing his war medals. Bernard's disappearance, without notice, from his care home in Hove, East Sussex, where he lived with his wife Irene, triggered a police search and his whereabouts emerged only when a younger Second World War veteran phoned to say he had met him and he was safe. He had decided to join British Service veterans, most making their final pilgrimage to revisit the scene of the Allied invasion of German-occupied France. On his return Benard said that his aim was to remember his fallen “mates”.

On his 90th birthday, days after he returned from his escapade, he was inundated with more than 2,500 birthday cards from around the world and he was later made an 'Honorary Alderman' of Brighton and Hove in a special ceremony at Brighton Town Hall.

Like his disappearance, his death, has been covered by tv, radio and coverage in the national newspapers and generated hundreds of tweets.

Having joined the Royal Navy in 1943, Bernard initially took part in the Battle of the Atlantic on a destroyer protecting convoys against German U-boats and on one occasion was part of a boarding party which captured one of the Enigma coding machines from a submarine forced to the surface. He also served in the Italian campaign, transporting and supplying the Allied troops fighting their way up the spine of Italy. Finally, in 1944, as a 19-year-old junior officer, his ship was one of  the D-Day flotilla of 6,939 vessels assembled to create a bridgehead to get thousands of troops and equipment into Northern France and  provide covering fire for the thousands of troops and tanks wading ashore on the German-occupied beaches of Normandy.

On the 7th January, just over a week after the death of Bernard, the  :

It recorded the passing of Second World War veteran, Frank Moore. Unlike Bernard, Frank's death went unrecorded on radio and tv and in national press and generated just one tweet by BridportNEWS.

Unlike Bernard, who spent his war behind the steel walls of a destroyer, Frank spent his War out in the open, in gliders and parachutes and fighting on the ground and his death merits more than a single tribute in a provincial newspaper, because he : 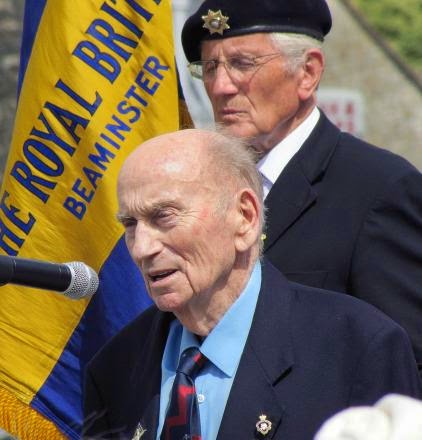 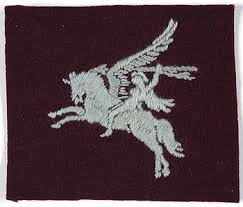 * began his war at the age of 18 in 1942, in 1st Airborne Division, a British Army Infantry Division formed in 1941, served in the North African campaign and then in the Sicily operation, prior to the invasion of Italy, which he described as "fairly disastrous" because "The Americans let their gliders off too early and 600 men were drowned before firing a shot. The only thing I can say is that the 82nd Airborne division hated their pilots more than we did. They were basically civilian pilots stuck in a uniform, they were not very good at that stage.”

* narrowly escaped death for the first time when he was posted as a 'junior dogsbody' to HQ and had been promised by his Commander Royal Artillery, that he could fly in its glider, but in the event couldn't, because it was overloaded and when it subsequently crashed in a river bed, heard that everyone on board had been killed.

* by 1944, at the age of 20, was a Lieutenant and Leader of F Troop, commanded by Captain Tudor Griffiths, consisting of a gun position officer, a troop sergeant major and four sergeant gun commanders and took part in the disastrous 'Operation Market Garden' http://ow.ly/H0JzS  as one of 35,000 troops dropped 160 km behind German lines in an attempt to capture a series of bridges over the Maas, Waal and Rhine Rivers, in order to outflank German fortifications and invade Germany. http://ow.ly/H0JPB

* took part in the British 1st Airborne Divisions daylight assault, which met with little initial opposition and had his role later recorded in Martin Middlebrook's book : 'Arnhem 1944 - The Airborne Battle' with : 'The very first to arrive was F Troop with Lieutenant Frank Moore in charge' and later recalled : “We landed 63 miles into enemy lines but the ground Army never did reach us. I was very lucky I was hit in the legs – only mortar splinters and a couple of chaps helped me” and narrowly escaped death a second time, when shot at in a church tower at Arnhem because the tank guns were pointing just a few feet too low.

* found one soldier's death particularly poignant : “ He was from a Dorset Regiment and he was standing next to me when a machine gun opened fire. It missed me and hit him in the neck. We cut his jacket off him and tried to put something over the wound. He said he didn’t feel any pain. At the aid post you virtually had to tread over people, with corpses stacked up outside. We put him in the back of the church where sadly he died. I never knew his name.”

* witnessed, after strong German counterattacks, his Division all but destroyed, in the nine-day battle and believed his guardian angel was based in the church at Osterbeek, in which he sheltered and around which much of the fighting he took part in took place.

* after the War, by a set of unlikely coincidences, found out the unknown soldier whose death he had witnessed was called 'Tom Rose' and made contact with his sister and her husband and son who were "very happy because I was the first person they’d met that knew what had happened to him. There were hundreds like that.”

* in the post-War years, built up a business as an agricultural engineer and in 2004 presented one of his 'Moore Mowers', which had been specially adapted, to the War Graves Commission and the Airborne Cemetery at Arnhem, complete with its Pegasus emblem, the badge of the 1st Airborne Division.

*  said at the time, that he was proud to make the donation, his way of paying his respects to his fallen comrades because 40 of the 44 in his Regiment who were killed in the nine-day battle were buried at the cemetery among the other 1700  who took part in the operation and had also died.

* headed a committee in the town of Beaminster to get its War Memorial returned to its central location in the Town Square, a project which took years and returned to the town, having moved with his wife to West Sussex and despite failing health, to open the memorial in July,2014. 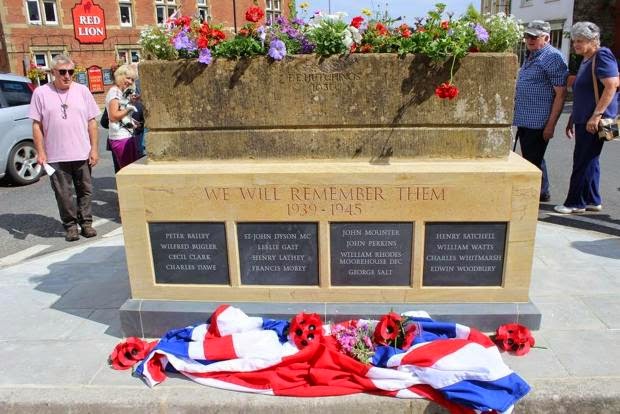 * was said of by 75 year old Rear Admiral Musson, who had taken over from him on the Memorial Committee : “It was a huge joy for him to be able to come along to the dedication in July. On the way back they had an accident in the car but he was completely unconcerned because he had achieved his aim. He’d clearly been marked for life by his experiences of the War.”

* was also said by the Rear Admiral, to have been driven in his determination to have a memorial in Beaminster

"because he was involved in the Battle of Arnhem in 1944. He had a pretty tough time, well they all did. He had people killed all around him. He spoke very movingly at the dedication of the war memorial. He was talking about one chap who attacked a German tank, his anti tank weapon didn’t work and the tank targeted him with a flame thrower. It took him three weeks to die. Another chap was wounded and taken down to the cellar of a Dutch house. The Germans came and threw a grenade in and put himself in its way, dying instantly, to protect the Dutch civilians.”

* was remembered by fellow memorial committee member, Tony Greenham (right),from the Royal British Legion because :
“It was his idea way back to have a memorial and he said it was to remember people who had no known grave and this is a way of remembering them. What a man he was, he was very determined. He made it out in his wheelchair to sell poppies for two days for the Poppy Appeal this year and wanted to go on parade for Remembrance. After that he told his son he’d achieved everything he wanted. He was a true gentleman and will be greatly missed by all who knew him.”

Labels: Frank Moore in need of a "Farewell"