* Brian, as prolific in his creations as his childhood hero Edgar Wallace and best remembered for entertaining Britain with 'The Avengers' and 'The Professionals' in the 1970s and 80s has died at the age of 83.

* was born in Croydon, Surrey in 1931, the son of East-End Londoners, Susanna ( O'Grady) and Albert, started writing at the age of five and produced his  'Brocky and The Black Adder', developed and recovered from pneumonia and was considered 'delicate' barred from swimming and riding a bike and, eight years old when the Second World War broke out, was evacuated to Hitchin, Hertfordshire where he didn’t go to school due to a bureaucratic cock-up and recalled : "My education was simply reading a lot of books and going to the cinema.”

* was given a typerwriter by his Father who he told, when ten, that he wanted to be a writer, not an engine driver like other little boys and was fed an eclectic range of discarded library books by an uncle, from manuals about bookbinding to Edgar Wallace, Somerset Maughan to Proust and at the age of thirteen, in 1944, was paid a guinea for his first story in 'The Hospital Saturday Fund Magazine'.

* grew up with great respect for his Father, an engineer who, before he was born, walked up to 22 miles a day looking for work and he himself left school at fourteen in 1945 and, thwarted in his ambition to be a journalist because of lack of qualifications, started work as a messenger boy for a Fleet Street advertising agency and worked his way up to become a packer.

* was called up for National Service in the Army in 1949 at the age of eighteen and despite never having fired a shot, recalled "found I was a natural shot. So they made me a training instructor and I spent two years training people how to kill other people. It’s been useful to me in my writing because, in the course of that, I went to the Army Small Arms School where you get the chance to fire everything. I’ve fired flintlock rifles and flamethrowers and Thompson sub-machineguns and everything.”

* on leaving the Army, was offered, but didn't take a job as a private eye in London with 'John Smart’s Detective Agency' because he didn't fancy going to Leeds for three month's training and instead worked as a copywriter at the 'J Walter Thompson Advertising Agency'. 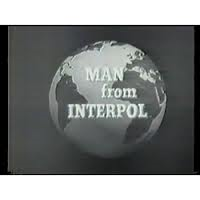 * at the age of twenty-four, in 1955, had a thriller screenplay about two men in a railway carriage,' Valid for Single Journey Only', accepted by BBC TV and then, as a result of a lucky break, became a film scriptwriter for the 'Danziger Brothers', because he could be depended on to turn out one cheap, but worthwhile, 30-minute 'B' feature a week and also started tv scripts with one episode of  'White Hunter' in '58 rising to nine episodes of 'The Man from Interpol' in '60.

* also combined his Danziger work with writing for 'ITC Entertainment' for ITV and two episodes of 'The Invisible Man' in '59, nine episodes of 'Danger Man' starring Patrick McGoohan in '60 -61 http://ow.ly/Hghfi and using the pseudonym, 'Tony O'Grady', co-scripted the film, 'The Tell-Tale Heart' in 1960 : http://ow.ly/Hgjvm

* enjoyed his work for the Brothers and recalled that : “The Danzigers were smashing because they used to move from studio to studio and use old sets and props. If they moved to MGM, they might have a submarine, The Old Bailey and a dozen Father Christmas outfits. So they’d say: "Write an 80-minute film that incorporates all three" and "They paid me a flat sum every week; I didn’t get paid by the script and there were no royalties. But they were very kind to me and the nicest thing was that virtually everything I wrote was made” and later related his work with them in a BFI interview ( half-way through clip) : http://www.bfi.org.uk/live/video/406

* at the age of 30 in 1961, was picked up by ABC Television looking to re-vamp their series, 'Police Surgeon', starring Ian Hendry and co-staring Patrick Macnee, as 'The Avengers', because Ian's screen fiancée had been killed and together they were out to find her killers and avenge her death, but left after writing five episodes and recalled : "There wasn’t really a format for the series. It was just a doctor and a special agent and was quite terrible – a million miles away from what the series became." 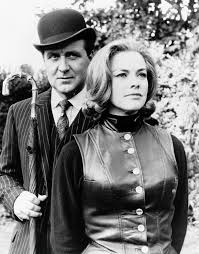 * rejoined the series after Ian had left and Honor Blackman, playing the man's part,  had joined Patrick who had "put on a bowler hat and picked up an umbrella and I think it was him who said to Honor Blackman : "Why don’t you wear trousers and boots? I like them." Then it kind of escalated and the writers really caught up with it ...We overtook the trend and made it even more consciously trendy after that.”

* became 'Script Editor and Associate Producer' on the new Avengers series which ran until 1969, starring Diana Rigg and later recalled : “What they wanted was someone who knew The Avengers and knew film and I was the only person who was qualified” and described the making of the series in 2008 : http://ow.ly/Hg4ek

* had fun with the inversion of the dramatic cliché : "We had a marvellous teaser once with the body outline marked out on the floor and this chap comes in, they shoot him and he falls into the outline. We were always doing that sort of thing” and in addition worked with scripts which "got more and more bizarre and, as well as debunking Sherlock Holmes, famous film plots started turning up – High Noon, The Maltese Falcon and Tarzan movies were just some." http://ow.ly/HglEC

* squeezed in the film script for 'Station Six-Sahara' in 1963 https://swarm.tv/t/RXo and on tv, in parallel with and beyond 'The Avengers', brought the same spirit of  burlesque to his other series, poking fun both at the genre they were imitating and the sources of their inspiration with 'Adam Ant Lives' for the BBC in '66 http://ow.ly/HgnHv , 'The Baron' as 'Tony O'Grady' for ITV in '66 http://ow.ly/Hgq5b

*in 1971, for ITV, suggested the idea and wrote three episodes of 'The Persuaders'  and was pleased with the way "Roger Moore and Tony Curtis got the spirit of the series and as it progressed, honed their characters to perfection" and followed with 'The Protectors' and 'The Adventurer' in '72.

* in films, in 1967 scripted 'The Peking Medallion' and in '70, 'See No Evil' starring Mia Farrow http://ow.ly/HkdKB and also wrote and produced 'And Soon the Darkness' http://ow.ly/HgrEY hammered out over two days on his typewrite and filmed without a word changed in '71, after which his business partner, Albert Fennell, said :"You should have directed it " " and suddenly I thought 'Yeah, perhaps I should have done'. I knew I could have directed it better. Then I wrote and produced a film for Hammer – Dr Jekyll and Sister Hyde in 1971."
http://ow.ly/Hkent

*  got his chance to direct when Hammer accepted his storyline for 'Captain Kronos: Vampire Hunter' in 1972 : http://ow.ly/Hgtaa and enjoyed the climax : "a three-minute sword fight between Kronos and the vampire. It’s got this marvellous moment where Kronos stabs him with the wrong sword and this vampire walks around with this rapier through him. There’s quite a bit of humour in it”, but then saw Hammer shelve it until 1975 and give it poor distribution as part of a double feature.

* later lamented  : "I really enjoyed Kronos. I was on a peak then. I was ready to go into another thing and make it better, but it didn’t happen. I was hoping to make another Kronos adventure, but then I got into 'Thriller 'for TV – I did 43 of those, which is quite a lot, really. They’re 90 minutes each in America – 72 minutes running time – which is quite a lot of writing.”

* also lamented the number of editors and quality of direction on ITVs 'Thriller' : “It offends me, because it means that what they’re putting on screen they don’t really give a shit about. If they really did, they’d say We can’t have three editors! It’s got to be one man. There are some film directors… Lean, Ford, Kurosawa… if I see a shot of their work I can tell it’s theirs. You can’t say that about many television directors. If any.”

*  in 1972, devised, but did not script write the BAFTA award winning sitcom, 'My Wife Next Door' http://ow.ly/HgtJM about a divorced young couple played by Hannah Gordon and John Alderton, who buy cottages in the country and find themselves unwitting neighbours and in the same year co-scripted the American tv movie, 'The Woman Hunter'. 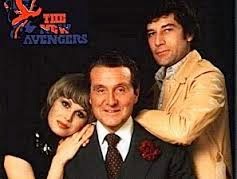 * in '74 scripted the film, 'The Golden Voyage of Sinbad ' http://ow.ly/HjJBN
with Ray Harryhausen's stop-motion effects and 1976 with his own company created 'The New Avengers' http://ow.ly/HjM4u and to cast the central female role of Purdey considered about 700, before choosing Joanna Lumley saying that he knew she was the right one : "good to look at, witty, charming, elegant, but can knock you through a plate-glass window." http://ow.ly/HjNEm

* with his company, 'Avengers Mark One Productions' from 1977 - 83, produced 'The Professionals' for ITV http://ow.ly/HjOXY , which made stars of Martin, 'ex-copper', Shaw and Lewis, 'ex- SAS soldier', Collins and the Ford

Capri, based on the adventures of the crime fighting unit, C15, instructed by the Home Secretary to use any means possible to deal with serious crime and put its success down to the fact that Brody and Doyle were modern heroes who male viewers want to emulate and with whom women wanted to sleep.

* had some success in the USA in the 1980s writing episodes of the tv series, 'Darkroom' and 'Remington Steele', scripted the film 'The Watcher in the Woods' in 1980 and in Britain worked on BBC TV's 'Bergerac' and ITV's 'Hammer House of Mystery and Suspense' and  adapted Gavin Lyall's  espionage thriller 'The Secret Servant' as a 3-part drama for BBC TV in 1984.

* in the 1990s, in his sixties, wrote for the BBC's 'Bugs' series  http://ow.ly/HjQAu and in the USA scripted the film 'Highlander II : The Quickening' in 1991, which saw his work suffer from recuts and reshoots : http://ow.ly/HjPDa

* 1n 2008 at the age of 77, wrote the play 'Murder Hunt', performed at 'The Mill at Sonning' and starred David Montieth as Captain K'Maka, a native African policeman who has to find the murderer amongst a bunch of guests stranded at a remote safari lodge, possibly an echo of the Edgar Wallace he had read seventy years before recalling : "Sanders of the River were fascinating to me as a kid."

* when he was forty-six said : "I gave up playing cowboys and Indians when I was twelve, but I do get good ideas. I don't know where they all come from, but I know I won't live long enough to write all of them down" and later, when asked about the 'creative process', understated its complexity and said that it was hard to pin down "I usually 'fix' the characters in my mind, put them in the most difficult situation and when I have three or four high spots I start to write. I have to know what page 60 is, before I write page 1" and working on a horror film with his sons, George and Samuel, at the time of his death, watched an episode of 'The Avengers' and made, with perfect self-effacement his final comment  :
"I did quite a good job."