Henry Blofeld, who is 76 years old and has worked as a cricket commentator for the BBC Radio programme, 'Test Match Special' for the last 44 years, is not a happy man. The told the 'Radio Times' magazine that he would head to India to commentate on England’s winter tour of the subcontinent, but was sad about not being given the chance to work on one-day games. He said : “I always rather wish I was there, but I think they feel perhaps that I’m a bit too old, don’t you? They don’t ask me now and they’ve got so many newcomers, they don’t want an old fart like me.” The BBC confirmed this when on source said : “We pick the team that is best suited to the type of cricket that is being covered.” At the same time they were quick to point out that : “Henry absolutely remains an important part of our cricket coverage and is a much-loved member of the Test Match Special team.”

Twenty-20 cricket, played over one day, was introduced by the England and Wales Cricket Board in 2003 for inter-county competition and its success has seen its spread around the cricket world.  A typical game is completed in about three hours, with each innings lasting around 75–90 minutes and a 10–20-minute interval. This is much shorter than previously-existing forms of the game and is closer to the time span of other popular team sports. It was introduced to create a fast-paced form of the game which would be attractive to spectators at the ground and viewers on television. It was introduced at the international level in 2007 and Henry has made it clear he doesn't like it and has disparagingly described it as “showbiz, pure and simple…its only worthwhile job is to raise money” and told The Telegraph in 2014 that a dominance of the short form of the game would lead to "standards falling alarmingly".

At 66, Jeremy Paxaman is Henry's Junior by ten years and unlike Henry, his career has mainly been as a commentator on BBC TV. Unlike Henry, his gripe is not with their employer, but with, 'Mature Times', which apparently is the largest free publication targeting the 50+ demographic in Britain with 200,000 copies published monthly and over 600,000 readers across the online and digital editions.

Jeremy recently checked into a hotel and found 'a pile of free copies of the paper, which calls itself  'The voice of our generation' 'Oh God', I thought, the cheeky bastards are including me. Back off. For this must be the most unfashionable publication in Britain. Who wants to be "mature", like an old cheese ? We all know that "mature" means on the verge of incontinence, idiocy and peevish valetudinarianism. They might as well have name it the Surgical Stocking Sentinel or Winceyette Weekly.' 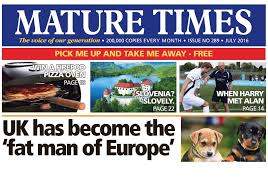 Jeremy's use of  'valetudinarianism' , the state of 'constantly and morbidly concerned with one's health' is befitting someone who still chairs the BBC's 'University Challenge'. He went on : 'The paper is adorned with advertisements for hearing aids, recliner chairs, copper insoles, stair lifts, devices to help you in and out of the bath and Your Life After Death, a book written by someone called 'Joseph' who apparently, is dead. I should rather be keeping company with Joseph than looking forward to any of these products : Why do the people who run these dreary publications assume that, apart from a cruise somewhere in the company of other virtual corpses, this sort of stuff is all we want ?'

Its publisher, Andrew Silk, hit back at Jeremy with : 'He is 66, so he obviously does not see himself as one of the people he wants to poke fun at, which is irrational.' He wrote :  'I suspect that with the high media profile enjoyed by Mr Paxman, comes a massive ego as well - but perhaps it's time for that ego to contemplate a little. 'Mr Paxman, you have just insulted over 21 million people (yes that's how many over 50s there are in the UK), you have called them 'cheesy and on the verge of incontinence' and I'm sure, on reflection you may regret such a statement.'

Labels: No country for Blofeld and Paxman