Terry Jones, who is 74 and directed Monty Python’s films 'Life of Brian' and 'The Meaning of Life', and co-directed 'Monty Python and the Holy Grail' with Terry Gilliam, is the latest high profile celebrity suffering from dementia. Terry has primary progressive aphasia, which affects his ability to communicate. He has joined the 850,000, mostly old men and women in Britain who live with dementia related conditions. A number which is predicted to soar to one million by 2025 and two million by 2050. 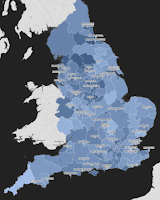 Terry's, no doubt, private health care, picked up his condition quickly, ensuring that treatment and strategies are in place for him and his friends and family to deal with his situation as it progresses. This is not always the case for those who rely on the National Health Service for their dementia treatment as revealed by the 'Dementia Atlas' published earlier this year. https://shapeatlas.net/dementia/#6/52.945/-2.147/l-p65

It shows how regions are doing on things like 'dementia check-ups' with dark blue indicating greater activity in dementia-friendly communities. The lighter areas indicate the black spots where elderly sufferers can go a year without their needs being assessed. The new atlas has five different categories for how good an area is for dementia patients, including 'prevention', 'diagnosis' and 'support' as well as 'living well' and 'dying well'.

Caroline Abrahams, of 'Age UK', said it revealed that care was "patchy to say the least". "This is an unacceptable postcode lottery of care." She added  : "We must continue efforts to improve access and quality of care for the growing number of us living with dementia. In some areas help is really good, but elsewhere services are frankly not up to scratch, with only a few people receiving at least an annual review of their care following diagnosis."

National Health Service guidelines say every patient should have a face-to-face meeting at least once a year to have their care plan reviewed which is extremely important given that dementia is a progressive condition and a person’s needs become more severe over time. The Atlas shows that fewer than 50% of dementia patients in Somerset receive this, whereas in North East Lincolnshire 86% of patients are seen within the time frame.

George McNamara, of the Alzheimer’s Society, said : "Everyone with a dementia diagnosis must have a meaningful care plan that specifically meets their needs. Far too often people with dementia are being let down by a system that doesn’t provide for them, denying them access to vital care and support that could significantly improve quality of life. The atlas exposes varied care, with some areas reporting much higher numbers of emergency hospital admissions. Hospitals are frightening and unsettling places for people with dementia, so we need to do all we can do reduce unnecessary and potentially harmful admissions."

In the East London borough of Newham, however, only 34% of dementia suffers spend their final days in hospital, compared with 83% in Central Cheshire. The Atlas also shows that Cornwall and Devon, Cumbria and coastal areas of East Anglia score highly when it comes to allowing patients to be treated in care homes rather than in hospitals. 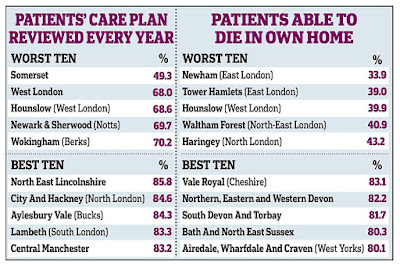 Dementia is certainly a big worry for older men and women in Britain. According to a survey of over-50s conducted last year by Saga, 68% of them fear that they will develop dementia, surpassing the 9% who are frightened about getting cancer. At the moment Britain's post-code lottery in dementia care means that some of those who succumb to the condition can expect to receive services which are three times as bad as others.
Posted by ...............................JohnBoy at 10:04