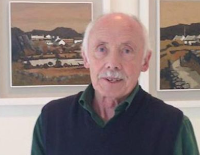 Wilf was born in 1941 and raised in the village of Llanfaelog and grew up mostly on Mynydd Bodafon, an ancient quartzite outcrop on the highest point on the Isle of Anglesey, Wales, from which he could see to the Mountains of Mourne and the Isle of Man.

As a boy he loved the business of 'art' and his grandmother gave him his first box of paints. He said : “My interest in drawing and painting is something I have been brought up with - it has always been there as an integral part of my life. The privilege of growing up in one of the most beautiful and picturesque parts of Anglesey probably had a considerable influence in my early development as a person and as a budding artist.”

From the age of 11, he was initially a pupil at Llangefni Grammar School, which in 1953 became a mixed comprehensive in 1953 and recalled : “One of the people who encouraged me when I was in school was a chap called Harry Hughes Williams. He was an extremely competent painter, but he was also extremely poor – there weren’t any outlets for artists in Wales, so I never thought of pursuing painting professionally.” 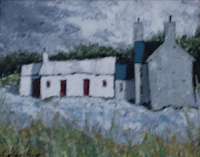 Harry's 'Study of an Anglesey Farmhouse'

Harry was a little more successful than the young Wilf imagined. Born at Clai Mawr Farm, Pentraeth, in 1892, he'd studied at the Liverpool City School of Art and in 1914 had won a scholarship to The Royal College, London. After the First World War he returned to his native Anglesey making a studio of one of the farm granaries at Mynydd Mwyn Farm. Harry exhibited his work to the Royal Cambrian Academy, where he became a full member in 1938, the year in which he became an art teacher at Harry's school. His influence over Wilf as his art teacher was considerable, but short lived. When Wilf was 12 in 1953, Harry died after falling from the steps of the granary, His forte as an artist had been the farms, agricultural landscapes and windmills of his native Anglesey.

Harry's replacement at the school was another artist, the 27 year old Ernest Zobole His five years at the school proved a barren time for him as a painter: he found the island flat, featureless, desolate, "all wind and chapel" and he was homesick for the teeming valleys of South Wales and the town of Rhondda Fawr.

Wilf would follow in the footsteps both Harry and Gwilym in that, like them he went into teaching, partly to financially sustain himself until that point when he could set himself up as a full time artist.
By the time he left school in 1959, he had been taught by three teachers, remarkable in that each of them was an artist in his own right.

Wilf left Anglesey at the age of 18, to study for three years at Bangor Normal College, an independent teacher training college and then took himself to his first teaching appointment as an art teacher in a secondary school in London in 1962, while at the same time maintained his professional interest by studying part time at Croydon College of Art. In the following years he successfully exhibited his work in solo and mixed shows in South London and the West End.

In 1974 at the age of 33 and after 12 years teaching in London, Wilf returned to Anglesey to live in the house that once belonged to his grandmother in Mynydd Bodafon and to work in Local Government and Education and, although not exhibiting for many years, he continued to paint, donating work, illustrating and designing posters for national charities. In 1996 at the age of 55 he retired to devote himself full- time to painting. He now worked harder than he'd worked before because : “I enjoy it, but more than anything it’s an obsession. I haven’t painted for two or three days I really think I’m missing something. I start waking up at night thinking about it.” 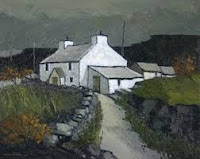 His inspiration came from the 1940s and '50s Anglesey of his childhood. He was answering to the call of  'hiraeth', that Welsh word for which there is no direct English translation. According to its definition by the University of Wales at Lampeter, Wilf was responding to a homesickness tinged with sadness over the departed and a mix of longing, yearning, nostalgia and wistfulness for the Wales of the past. It was back to the whitewashed, slate-roofed, traditional dwellings of Anglesey before the days of pebbledash and red roof tiles, nestling amongst hills and fields. He once said that the only modern thing he put into his paintings was telegraph poles and : “Whether I’m right or not in doing that I don’t know, but that is what I want to do. I steer clear of modern scenery – cars, things that I don’t really recall from my youth.”

His home at Mynydd Bodafon, on a craggy hillside with views across the heart of the island, provided much inspiration for his work. His favoured method was to sketch outdoors before returning to his studio to paint, usually in oils. Sunset, when the contrasts of colour are stronger, was his favourite time of day. He often began with the sky, which set the tone for a piece and applied paint with anything that came to hand : brushes, fingers, toothbrushes and even plastic credit cards. 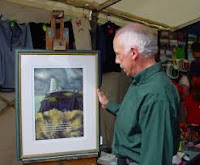 Wilf worked long hours at his craft and always in pursuit of perfection. For him the reward was "not finishing a piece of work but the making of the picture. There’s something really quite sublime about the whole thing. It’s a very private feeling; I don’t like being watched while I’m painting. I want to talk to myself, I may even swear at the painting." 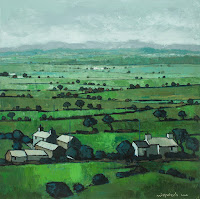 “I’ve often gone to a painting the morning after and scraped it all off simply because I’m not sure about it or don’t like it. It happens to about a third of what I do.”

“You never achieve perfection, but you want to think you can get close to it. If a painting’s going well, somewhere towards the end, the whole thing comes together and makes some kind of sense. That’s when I feel, ‘Yes, I’ve achieved something now; onto the next one’.”

Since 1996 he contributed his work to many successful exhibitions in London and throughout Wales including the 'Attic Gallery', Swansea; 'Oriel Tegfryn', Menai Bridge; 'Oriel Ynys Mon' and 'Oriel Pen-y-Fan', Brecon; 'Oriel y Bont', Aberystwyth and the Kooywood Gallery in Cardiff.

His friend and gallery owner Martin Tinney said of Wilf : that he was "A gentleman"  whose "integrity shone through when preparing for a new exhibition. Not for him the churning out of numerous works to please an audience. He he released pictures from his studio only when he was happy that they were 'ready'"

Scenes of his beloved Anglesey are now in both public and private collections in The Hague, Amsterdam, as well as Paris, New York, Australia and Britain. In addition, he contributed to and took part in art related radio discussions and debates and his work has been referenced and included in art publications and tv programmes including 'Sioe Gelf.'

Wilf once said :
“If I go away on holiday I find it difficult to do any kind of work because it’s foreign to me. I think it would take quite a long time to get used to it and to be comfortable enough to start working, so I tend to stick to where I live and what I know best. I know the people too – to me that’s important, to know the characters who’ve lived in the houses.” 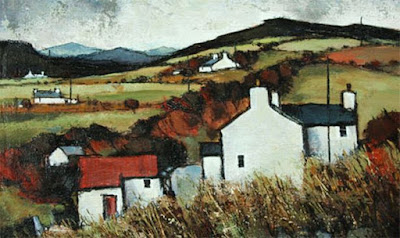