Britain is a country and Scotland a nation which say "Farewell" to an old, wartime airman called Jock Moffat, who 75 years ago, as David, attacked a battleship called The Bismarck, his Goliath 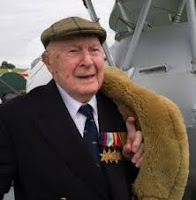 Seventy-five years ago Jock, who has died peacefully in Perthshire at the age of aged 97, played, what would turn out to be, a crucial role in the torpedoing and sinking of the Bismarck, Germany’s largest and most powerful battleship in the Second World War, thus ending the threat to Britain of the greatest surface raider.
http://www.bbc.co.uk/news/uk-scotland-38297099

John, later 'Jock' Moffat was born in the village of Swinton in the Scottish Borders in 1919 and raised in Earlston, where his father opened a garage. His mother, Mary, was an amateur opera singer and was instrumental in him learning to play piano and violin by the age of 10. John Senior had served in the Navy and had been an aeronautical engineer in the First World War before his son was born and after serving in Belgium, was posted to the seaplane carrier, HMS Ark Royal, which sailed to the Mediterranean to take part in the Gallipoli Campaign.

At the age of 10 in 1929, the sight of an Avro 504 aircraft fly over Kelso, triggered a lifelong passion for flying and for ten shillings he took his first flight by a pilot he later recalled as a "Biggles look-alike" and  "As for the experience of flying, I was astounded by it. This was like riding in the locomotive but infinitely more thrilling. There was the noise, the smell of hot oil and high-octane petrol and the speed seemed immense as we took off into the air, high above the countryside, with the town far below us. It was the stuff of dreams, like a glimpse of another world that made it impossible, once I was back on the ground, to view my surroundings in the same way again." 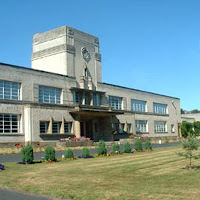 In the same year as his first flight he passed the Entrance examination for Kelso High School and set his heart on attending Edinburgh University, applied for a bursary, took examinations and attended interviews, but failed to make the grade and had no choice but to leave school at 16.  He heartily disliked his first job, working for a bus company and supplemented his income using his musical talents playing at weddings.

Bored with life at the bus depot, at the age of 19, he applied to join the fledgling Fleet Air Arm in 1938 and was accepted into the Reserves and was on leave in Kelso on 1 September 1939 when Germany's invasion of Poland led to the outbreak of the Second 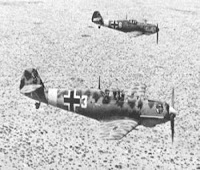 World War. By the time of the Fall of France to German forces in June 1940, John, now 'Jock' had completed his training and was based with 759 Squadron at Eastleigh. By the time the Battle of Britain began in the skies over Britain that summer, at the age of 21 he had already been tested in battle after two encounters with enemy aircraft. The first when he was testing an improvised oxygen system in a Gloster Gladiator at 29,000 ft and escaped an attack by a Messerschmitt Bf 109s and shortly after also escaped when engaged by a Heinkel He 111 while test flying an unarmed Blackburn Skua.

Reflecting on lighter things, he recalled 759 Squadron, as "the broken-down actor and windy jockey squadron. We had Ralph Richardson and Laurence Olivier as members. If it hadn't been for the constant air raids it would have been great fun. We didn't see much of Olivier: Vivien Leigh was on the scene! Ralph Richardson, though, was an instructor. He told me, "If you see an airplane flying over the airfield like this," and he mimicked a plane rising and falling with his hands, "then it's me. I suffer from kangaroo petrol". What a character!"

In the autumn of 1940 he joined 818 Squadron and was attached to the aircraft carrier Ark Royal which in May the following year was ordered to hunt down the formidable German battleship, the Bismarck, after she sank the Royal Navy battlecruiser HMS Hood. Jock recalled : “When Churchill gave the order to sink the Bismarck, we knew we just had to stop her trail of devastation at all costs!” 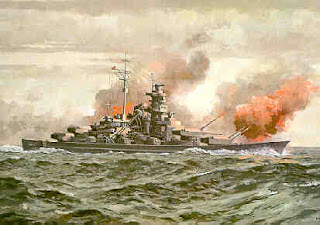 On 26 May 1941, having sustained a small fuel leak, the Bismarck was on her way to the French port of Saint-Nazaire for repairs and a last-ditch attempt to slow the battleship down, so that the British heavy units could catch up with her, was made that night. At 21:05 hours, Jock and his Observer "Dusty" Miller, and telegraphist/Air Gunner Hayman, flying in the Fairey Swordfish 5C/L9726 attacked the battleship.

Jock flew that night in an open cockpit, leaving him and his crew completely vulnerable, in driving rain, low cloud and a force 9 Atlantic gale. They approached the Bismarck at 50 feet, barely skimming the surface of the waves, in a hail of bullets and shells, to get the best possible angle of attack on the ship. Years later he could still feel the whip of the wind on his face, the smell the cordite in his nostrils and hear the crack of exploding shells.

He later reflected : "I do not know how I managed to keep flying: every instinct was screaming at me to duck, turn away – an impulse that was hard to fight off. But I held on." He also recalled, with perfect understatement  : “We dived in through the mirk, into a lethal storm of shells and bullets. Bismarck’s guns erupted and in the hail of hot bullets and tracer, I couldn’t see any of the other Swordfish. I thought the closer we were to the water the better chance we had of surviving so we flew in bouncing off the tops of the waves – and it worked." He added : "Nevertheless, the stuff was coming in at such a rate I don't mind admitting I was petrified. It was coming so thick and fast I was inclined to duck in my cockpit and in fact I think I did so"

In 2011 Jock was interviewed by BBC News Cornwall and recalled the ferocity of the gunfire he flew through before he released is torpedo :
http://www.bbc.co.uk/news/uk-england-cornwall-13573526

In 1960, he no doubt went to the cinema to see Lewis Gilbert's 'Sink the Bismarck' with Karel Stepanek playing the Bismarck commander, Admiral Lutjens and which depicted his exploit in the swordfish : https://www.youtube.com/watch?v=xFWwPYB74ac&t=1h15m08s 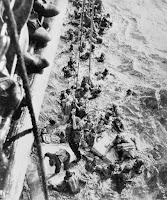 Jock took no pleasure in the great loss of life incurred and the day after the attack, when he witnessed the vast ship, pouring smoke, heeling over and spilling its crew into the sea. He was greatly affected by the fact that more than 2,000 perished that morning and there were only 115 survivors. He didn't know, at the time, that his role in the sinking of the Bismarck would prove to be instrumental in producing one of the most critical naval encounter of the War. His engagement with the ship left an indelible mark on him : "There's rarely been a day when I have not remembered what it was like to fly towards that great monster of a ship, or what I saw the next morning when she toppled over into the sea, And I do not expect to see a day when it does not."

It was only after analysis of the attack several years later, that he was told that his aircraft had indeed been responsible for the damage to the Bismarck's rudder which left it a sitting target.

Jock left the Navy after the War in 1946, having served with four squadrons in a Fleet Air Arm career spanning eight years and went to college in Glasgow to get a business degree and then a diploma in hotel management and then managed the Grandtully Hotel on the River Tay until he was 53 in 1972. He opened a shop in Aberfeldy selling antiques, tweeds and tartans until retirement at the age of 78 in 1997.

In 2010, his book 'I Sank the Bismarck' co-written with documentary writer Mike Rossiter, was published : http://ow.ly/h0LJ3075Qyf  He was both embarrassed and annoyed at the misleading title, since it was not his but a torpedo fired some days later by Lieutenant "Feathers" Godfrey-Fuassett or Sub-Lieutenant Ken Pattisson which sank the great ship. It was typical that he himself had always been reluctant to claim the result of his attack, maintaining that in the confusion of the atrocious gale and bad visibility, it was almost impossible to ascertain which hit was the fatal one and maintaining it was the joint effort of all the Swordfish crews involved.

Jock said once said :
"The great thing about the Swordfish was that the bullets just went straight through. After all, it was only made of canvas. It was like David and Goliath!”

What better epitaph for a fearless fighter in the sky ?

and also this year :


Britain is no longer a country for and says "Farewell" to its oldest and greatest test pilot, Captain Eric 'Winkle' Brown