Raymond, who has died at the age of 85, was Sporting Correspondent for Scotland's 'The Herald' for 37 years, most of them covering golf around the world. He himself conducted a tally when he retired in 1996 : 'When the numbers were added up last season this golfing pilgrim had covered consecutively 36 Scottish Amateur Championships and 32 Open Championships and World Matchplay Championships. Apart from innumerable professional and amateur events, 15 Ryder Cup and 15 Walker Cup matches were reported at which the gamut of emotions boxed the compass.' 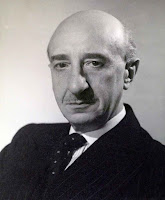 The army of readers he gathered during that period remained entranced by his witty reporting, written in the perfectly grammatical English he had mastered as a boy in the 1940s, More important than that, they relished the way he conveyed his joy for the game he loved.

Raymond was born in 1931, the son of Arthur Henry Jacobs, who had worked on the staff of Glasgow Royal Infirmary as a general surgeon, developed an interest in urology, spent some time in London with Sir John Thomson-Walker, studied in Paris and Vienna and was appointed as a urologist in Glasgow in 1930, becoming Head of the Urology Department there in 1936 when he was 37 and Raymond was three.

He had first lifted a golf club as a little boy in Elie, where the family holidays were taken annually and recalled : "I was left to entertain myself and, as the golf course was nearby, I started hitting a ball about." He was packed off to Scotland's oldest boarding school for boys, Loretto School, Musselburgh, East Lothian, where his Headmaster was Dr James Greenlees, who in his youth had played international rugby for Scotland, which probably explains why later, as a journalist, he confessed : 'Where football was concerned this correspondent, brought up on rugby, was
undoubtedly the most oval of pegs in the roundest of   holes.' In the summer terms he recalled : "those of us who were in the non-cricketer category were allowed to play golf at the great old Musselburgh course.'' Still at school at the age of 17, his first golfing idol was Henry Cotton, winner of the first real tournament he saw, the Open at Muirfield in 1948.

At the age of 18, in 1949, he was enlisted for two years national service in the Armed Forces and stationed in England, enrolled as a temporary member at the South Herts Golf Club, where he "played a round with Alex James. I remember nothing of the game but the preliminary exchange stays with me. "What did you say your name was?'' the football legend asked. "Raymond Jacobs,'' I confirmed. "H'm,'' came the grudging response. "Not much of a name for a Scotsman.'' Before Raymond was born, James had played in Arsenal's 1930 FA Cup Final win against Huddersfield Town scoring the first in a 2-0 win to give Arsenal their first major trophy. In addition, between 1925 and '32 he had won eight caps for Scotland.

In 1951 he enrolled as an undergraduate at Glasgow University but had lost "mathematically disadvantaged'' and left after six months. Now, after an introduction engineered by his father, he was given a job as a Trainee Manager at Lewis's Department Store in Argyle Street, where he rose quickly to become 'Manager of the Boys' Clothes Section'. He didn't stay long. At the age of 26 in 1957, with itchy feet, he secured an interview and a job in Eaton's Store, Montreal and took himself off to Canada.
enthusiasm for study and left after a year. He tried accountancy but, on his own admission he was

Unfortunately, what he described as Canada's "first post-war recession'' put paid to his career in retail and the newly unemployed Raymond went into the offices of a newspaper group which published the 'Westmount Examiner', a weekly English language newspaper serving Westmount, Quebec, looking for work and to his surprise was given a job. It was here, over the next two years that he served his journalistic apprenticeship before returning to Scotland at the age of 28 in 1959.

Having secured a job on the Glasgow 'Herald' as the newspaper's 'Special Correspondent' he recalled, tongue in cheek, that he 'dipped a tentative toe into golf's waters by reporting that Gullane Golf Club, represented by Mrs R T Peel and Mrs W C Ritchie, on their home course, beat the Elie and Earlsferry team of Mrs H G Burton and Mrs D Oliver by 4 and 3 in the final of  'The Bulletin Women's Foursomes.' My brilliant career was off and running. Also in that year Miss J S Robertson (later Janette Wright) beat Miss B McCorkindale (later Mrs Belle Robertson) by 4 and 2 in the final of the West Women's Championship at Cawder.'

Raymond added winter sport to his repertoire when, for three seasons, he was the Herald's ski-ing correspondent 'when, to put it politely, facilities at Glencoe, Glenshee and Cairngorm were primitive.'

After four years as 'General Sports Sub-editor' and 'stand-in golf writer', he was about to leave the paper and Britain for South East Asia, but changed his mind : "I had actually been interviewed and more or less agreed to take a job with the South China Morning Post in Hong Kong. For some reason I then decided not to go.'' Within a few months Cyril Horne, the Sports Editor, Golf Writer and Football Correspondent  resigned and Raymond was offered and took the job as 'Golf Correspondent' at the Herald, but was also told : "You can cover the football in the winter, too."

He was always at pains to point out that, at the point of his elevation, he was already a member of the Royal and Ancient Golf Club of St Andrews, one of the oldest and most prestigious golf clubs in the world and regarded as the 'Home of Golf'.

In 1964, at the age of 33, he met the 68 year old Scottish-American, Tommy Armour, when he visited Glasgow to promote his latest line of clubs and clearly impressed Raymond who wrote : 'Despite having lost an eye in the First World War, the Edinburgh-born winner of the three major titles available in his prime - the Open and the US Open and PGA Championships - expounded the theories which later turned him into one of the first swing doctors. ``How to play your best golf all the time,'' translated theory into best selling words and, ice tinkling against the sides of a brimming glass.'

He reiterated Tommy's simple advice : '"Grip, stance and timing - these are the important things. Golf is a difficult game. It's too difficult, really, but it's not as complicated as some people have made it out to be. To me, a coach should tell his pupil what to do right, not criticise the two or three things he (or she) may be doing wrong,'' '

The hallmark of his sports writing, the perceptive comments his readers relished, was illustrated in his coverage of an Asian golf tour in 1976 which travelled through Manila, Bangkok and Singapore. He reported : 'An Asian Tour official to whom I referred his enterprise as being in the Far East retorted: "Far East? Far from where?'' At that point, I thought it probably unwise to refer to lost empires.'
and
'Then Maurice Bembridge, the Ryder Cup player who was a regular competitor on that Tour, attempted to define the culture shock of witnessing so much deprivation by remarking: "Out here, millions live off the smell of an oily rag.'' In the Third World, golf, even for the best of tourist reasons, seems all too often a well-to-do game grafted on to an otherwise impoverished body.'

Most famously on the occasion of  the 1989 British Open at the Royal Troon Golf Club in Scotland, he referred to Payne Stewart, always noted for his colourful dress and in this instance wearing the official NFL colours, effectively the US Flag, he wrote : 'He was dressed not so much for a golf tournament as burial at sea.'

Raymond retired before technology would have forced him to change his 'modus operandi.' He had once said  : "The day they hand me a laptop I retire!” On the occasion of Raymond's retirement in 1996, the late Arnold Palmer said : “It has been a pleasure knowing you through golf. I have always had great respect for your ability and gentlemanly ways of doing your job.”


He said with his usual eloquence :
'Having toiled in the verbal vineyard of this newspaper in five successive decades, more than 32 years of them as golf correspondent, I wonder whether covering this great sport of ours, like whisky indisputably among Scotland's civilising contributions to the world, has not been better than general sports writing. In comparison with football, rugby, cricket, tennis and athletics golf may appear as the ultimate justification of the description "the bland leading the bland."  Be that as it may, this retiring sinner remains unrepentant.'