Britain is no longer a country for and says "Farewell" to its Grandfather of Toymakers, Ron Fuller 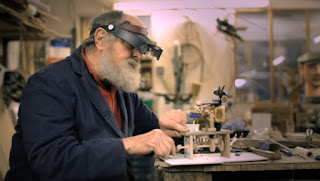 Ron Fuller, who has died aged 80, worked up to his death and over a period of 45 years to produce toys, automata and other eccentricities which delighted children and, more often than not, adults with memories of the wooden toys of their youth. They also enjoyed Ron’s quirky sense of humour which is accentuated by the toys themselves.

He was born in Liskeard, Cornwall, two years before the outbreak of the Second World War in 1937, the son of Ada, a seamstress and Purnell, a wheelwright, who let Ron play in his workshop from an early age. Ron was conscious that he came, as he said : "from a long line of wood and metal workers, radio repairers, train drivers, milliners and miners."

His love affair with toys began during the War which he referred to as his "formative years" when he "naturally made toy guns and became chief toy armourer for the whole town." As a teenager, in austerity-wracked Post-War Britain, he said his early teenage years were "mis-spent taking old radio sets to bits to see how they worked, consequently giving myself shocks and a taste for electricity; but at the same time, a keen interest in mechanical things and a sense of ‘make-do and mend."

When he was 73 he recalled : "My dad was a carpenter, so I grew up using his tools. I had a friend who went onto be an engineer and he introduced me to mechanics at a young age and we were always taking things to bits. I remember he and I raiding old car dumps, taking magnetos out and wire and making little motors. It started very early on and I’ve never lost the enjoyment of making things move. It’s continued all my life.”

Twenty years later, when he decided to take up toymaking for a living too get his business ‘off the ground’ he thought "it would be a good idea to make the toys that were my favourites when I was a kid – they were the chicken that lays five eggs, ship and submarine, horse racing game and pop-pop boat – I was not wrong."

At the age of 17 in 1954 and for two years he attended the Falmouth School of Art and followed this with two years National Service which he served as an Army Recruiting Sergeant. He then took himself off to London having been accepted to study for a degree in 'Art and Theatre Design' at the Royal College of Art in 1958. It was here he met his future wife, Rosamund, 'Moss' Steed, who he married in 1962, having graduated and while working in his first job as a technician at the Royal College.

They moved to Bristol in 1963, where he taught at the West of England College of Art where the future land artist, Richard Long, was one of his students. In the mid 60s they moved to Kent where he taught in Sevenoaks School, a coeducational independent school and it was now that he began making toys in his spare time, setting up a workshop in the living room with a sheet pinned across the room to keep in the dust. When it came to making toys, he was largely self-taught, but received help from his mentor, Jack Gould and was influenced Sam Smith, Youtha Rose, other members of the Toymakers Guild and the old German tinplate toy manufacturers.

In 1972, a letter arrived from his RCA contemporary Gerald Nason, telling of an ancient house with outbuildings going cheap in his village of Laxfield, Suffolk. He took the plunge : "Everything pointed to becoming a toymaker so that’s what I did, doing a bit of teaching now and then to make ends meet." 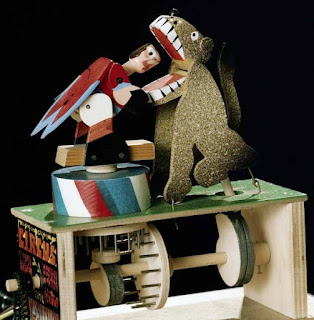 He was 35 years old and began with his take on mass production and turned out toys which ranged from can-can dancers, a man who put his head in the lion’s mouth, dolls’ houses, rocking horses, sheep-shearing men, sand-powered trapeze artists, everlasting-sausage-makers, submarines and horse-racing games.

He also made folk toys like the 'flipper dinger', which was hand-held and consisted of a metal hoop and stalk attached at a right-angle to a wooden tube and the 'whammydiddle,' a mechanical toy consisting of two wooden sticks where one rubbed on the other caused a propeller to rotate. In his creations his method was, on the face of it, simple :  “The way I go about it, is first decide on what you want to do, work out what you want to happen and then find a way of moving it.”

As Ron's family expanded, he and Moss had three sons and fostered four girls, family income was boosted by regular commissions from the Crafts Council and the Cabaret Mechanical Theatre in their Covent Garden premises and some major one-offs such as animated forest animals he made for the Oxfordshire Museum, Woodstock and for the Chandos Pub, Trafalgar Square, the model cooper who rolled his barrels on the roof on the hour.

Over the years his toys found their way into permanent collections at the 'Cabaret Mechanical Theatre', London, the V&A, the 'National Museum of Childhood' at Sudbury Hall and he "made a circus for my friend Marvin" and Marvin's Marvelous Mechanical Museum in Michigan. In addition, he was proud to "have designed English Postage Stamps for the Royal Mail which can be bought from stamp shops." They commemorated the role of the circus in British life. 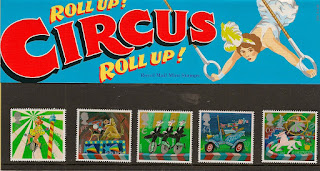 For the automaton he made for the children in their ward in the Norfolk and Norwich Hospital, they turned the handle and a tin moth took off from marigolds; a lion watched cross-eyed as the moth landed on his nose; he sneezed, and tried to catch the moth as it flitted back to the flowers. 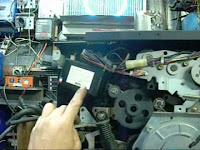 Ron's toys reflected changes in technology, so that he was able to produce a hopping frog powered by a solar cell and collected machine parts rescued from computer printers and laser copiers destined for the waste tip. He said : "Copying machines are the best. You get lots of cogs and wheels out of those. Computers are always disappointing – there’s nothing in those.”

In 2010 he said : “At the moment I am making one of a girl sunbathing on a beach. When the sun comes out she takes her top off and when it goes in again, she puts it back on. A simple toy, powered by a solar cell but it raises a smile.”

Ron demonstrated his virtuosity as a toymaker when he said, with perfect self-deprecation, : “It’s something out of the ordinary, something they are not necessarily expecting. I did a piece for Norwich Castle Museum. They had an old chest there with a big lock on it. It was an early portable bank. So I made an effigy of a Norman knight – very similar to the kind you get on tombs, lying down, but when you put the money in, the dog lying at his feet wakes up, seemingly because he hears the money go in and starts barking and that wakes the knight up, so he sits up and salutes the person who has made the donation. I had great fun playing with that. When you are doing something that complicated there’s no point in showing the mechanism because you don’t want to distract from what’s going on in front of you.” 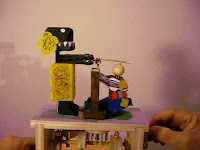 He said that his original 'Sheep Shearing Man' toy was created for a friend who kept sheep. “I just liked the idea of a sheep shearing a man. I then started to fiddle with it and the bit with the sheep cutting the head off was an after thought – that came later. It started off just shearing all the time; then I added a slow motion cog – so the main mechanism drives all of the main parts, then the slow motion cog is clicked on a notch each time it turns, until the man is forced up and has his head chopped off.” He said that he has a habit of sometimes going too far and making things too complicated : “You’ve got to know when to stop.”

Ron referred to himself as a "village toymaker" and the 25th December would find him, Father Christmas-like, delivering toys around the village of Laxfield, where he had painted the stage set he had designed for the village pantomime.

Ron's secret to success is that he never stopped being a child himself. He once said : "When I'm not in the workshop, I'm playing with my toys. There's a model boating pond in Southwold. People bring three-masted schooners, clippers, yachts and racing boats. It's marvellous."

He admitted that it was the work itself that drove him and "the money didn’t come into it at all." 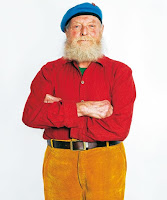 'I like wearing bright colours. My trousers are from Gallyons countrywear shop in Norwich, and my beret is from the UN peacekeeping force. Being a toymaker is quite a romantic notion. I play with cars and trains and boats and planes all day – it's a substitute for real life. I don't want to look drab. I live in a world of make-believe.'