Britain is no longer a country for and says "Goodbye" to Harry Walker, an old son of Coventry who was once briefly admitted to the ranks of the Aristocracy of Rugby

Harry, who has died at the age of 103, was born in Coventry in the second year of the First World War, in 1915, never saw his father. In fact, Henry, who was serving as an Army corporal in the 2nd Worcestershire Regiment, only saw his son once, when home on leave from service on the Western Front, before he was killed on the Western Front at the Battle of the Somme. A boxing champion in the Army, he had also performed as a gymnast in front of the King and Queen.

Without any support from the state, his mother, Mabel, a weaver by trade, was forced back to work in the mill and little Harry was brought up by his Grandmother. He recalled : "Mother married again, which was a bloody good thing for her, but me stepfather had his own life and his own children and he wasn't interested. What decisions I'd got to make, I'd got nobody to ask. So I had to make them myself."

From the age of 11 he attended the John Gulson School named after its philanthropic, Victorian Quaker Mayor and Alderman of the City of Coventry, where he began his association with rugby and played centre three-quarter in his first year then, as Harry recalled : "Bill Goddard, the sports' teacher, he says : "Walker, you're getting big enough now, you'd be more useful to us in the forwards." It was in one of his schoolboy match that a teacher, who happened to be the Coventry Rugby Football Club chairman, attacked him with an umbrella for what he considered to be an 'overly zealous tackle.'

After he left school at the age of 14 in 1929, he formed his own team, 'John Gulson Old Boys', so that he could continue playing and after being spotted a representative from Coventry Rugby Football Club visited his home and asked his mother if he could attend a Coventry Second XV game. As a result, he made his debut for Coventry at the age of 17 as a wing-forward in 1932, but was soon converted to a prop. It was a position in which he would remain for the next 20 years representing his hometown club on between 350-400 occasions.

In the morning of games, Harry was at work as a machine tool fitter and recalled : “You didn’t need gyms then because we all worked in physical jobs. I think our training equipment was three skipping ropes.” In fact, he was often at Butts Park Arena where he recalled training in the dark, mud and rain with those ropes.

The derby matches against Rugby, Leicester and Northampton were keenly contested, but these local hostilities were tame compared to the cross-border skirmishes against the Welsh. Harry recalled one match against Cardiff as an 18-year-old in 1933 where he came face to face with Archie Skym, the then Wales Captain. “At the first scrum as I went down, bang, he hit me. I was buggered. Arthur Wheatley, my second row, says, "You all right Harry?" and I couldn’t speak. So he says, "Don’t go down so quick next time". To be honest, I didn’t want a second time. As I was going down, Arthur says, "You’ll be all right, keep your back straight and you’ll have no more trouble". I looked at the Cardiff bloke and he was suffering more than me. I was all right after that."

“There was no mercy back then because there were some proper hard men. Eric Bates at Rugby, he was one. Digger Morris at Gloucester thought he was one; I didn’t.” Playing when he was a 19-year-old in 1934 he was part of a Coventry pack that marched a Leicester scrum back 25 metres with the headline in the Leicester evening paper ran : “Cancelled Fixture: Coventry Too Dirty”

A shade under six foot tall and weighing 16 stone and with thick black hair slicked to the side, he was a distinctive presence in his working class team playing for its working class crowd and he took immense pride in serving Coventry : “It was fantastic. You were representing your City and your community. Ninety per cent of the team were Coventry kids and if you went out on the street then everyone would know you.” During this time he sustained himself on his weekly wage of £3.10 shillings as a fitter and so fierce was his loyalty to the club that he would turn down a bonus offer of £100 to sign for Huddersfield Rugby League.

He was 25 when he was called up to fight in the Second World War in 1940 and not unsurprisingly was enlisted to play in the Army Rugby Team and said : "That was a fiasco. I'd played for the Army in London, then going back to base I was the only other 'rank' and I tackled one of the officers and messed him up a bit and he turned round and said : "You can't do that. I'm an officer !"

He made his debut playing for England against Wales at Twickenham in the 1947 first post-war Five Nations International, at the age of 32 and earned nine England caps playing as a prop in 1947-8, playing in Five Nations encounters and against Australia. In 1952 England asked him back but he had been disenchanted and rejected their approach and recalled : “We had to buy our own shorts. All they gave us was a jersey. They collected them back after the game and if they did not have your number they went through your baggage to find it. We all had jobs so it cost money to play for England as amateurs and all the while they filled the stadium.”

Although his tenure as an aristocrat in the field of rugby was short lived he did play for the Midlands against the touring Kiwis at Coundon Road, the Wallabies at Villa Park and the Springboks at Highfield Road made 30 county championship appearances for Warwickshire and played for the Barbarians when they met the Wallabies at Cardiff Arms Park in 1948 and captured by
Pathé News. He recalled : "The Australians had beat France, England, Ireland and Scotland. They were unbeatable." He rated this as his best win of his career and in the same breath couldn't resist saying : "And in those days you couldn't keep the jersey. They used to come round and take the bloody jersey off you."

Three years ago In his 100th year, the Rugby Football Union offered him a ticket, with full hospitality in the President's Suite, for a Six Nations match against Italy, but failed to include either travel or hotel expenses. Needless to say, on principle and Harry being Harry, he rejected it.

Harry, in his own words when interviewed by the BBC : https://www.bbc.co.uk/news/uk-england-coventry-warwickshire-44381672 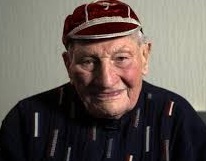