The Welsh village of Michaelston-y-Fedw, which  roughly translates as 'Michael's Church in the Birches',.was a small community of 300 inhabitants to the west of the city of Newport with slow broadband speeds which added to its isolation.

Now, with the help of its old men, it has transformed itself into 'The Fastest Village in Wales' with its previous, miserable 1-4 megabits per second, replaced by a magnificent 1000mps. This wasn't provided by internet provider BT, but created by the resident's own efforts. 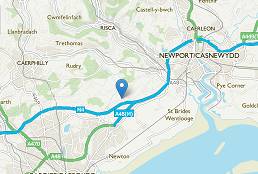 In fact, the villagers were unable to either download films, stream music or connect to internet banking, despite their proximity to the cities of Newport and Cardiff. As a result, they set up a community interest company and with £100,000 of EU funding and a grant from the Welsh Government, given with the proviso that they keep the costs down and the householders themselves would do as much work as possible, they proceeded to upgrade their fibre connection and join the 21st century.

As a result, the network, which involved raising £150,000 themselves and the digging a seven mile trench to lay the super-fast cables, was designed and installed by volunteers from the community consisting of farmers, teachers and a backbone of the retired old men of the village who collectively contributed thousands of 'volunteer hours' to the effort. 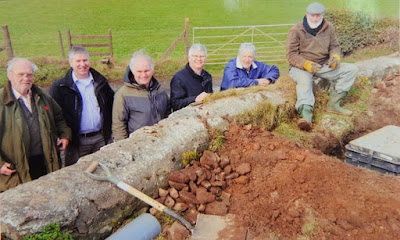 Brinley Richards, age 79, said : “It is a remarkable success story. I am so proud of the community. The village deserves recognition. Some of the people work more than 12 hours a day. I have no doubt that other parts of Wales will be asking us for advice.” In addition and beyond just installing high speed broadband, the project has also brought the community together : "It is without a shadow of a doubt one of the best things ever. I have got to know more people in the last four months than I did in the previous 25 years.”

Seventy-one year old Jim Dunk, 71, a retired marine worker, said he had lived in the village for more than 40 years but had made new friends through the project : “The number of people from different walks of life I have met has been incredible.”

Mark Graveston and Jim laying the fibre to Druidstone House.

Last year the Government announced that British homes and businesses will have a legal right to high-speed broadband by 2020, dismissing calls from the network provider BT that it should be a voluntary rather than legal obligation on providers. The Department for Digital, Culture, Media and Sport said only a universal service obligation would offer certainty that broadband speeds of at least 10Mbps would reach the whole of Britain by 2020.

No doubt, Glyn Williams, in front of his newly connected house, is grateful he doesn't have to wait that long to get connected.