Is Britain, once again, a country for an old ex-offender and erstwhile politician called Jonathan Aitkin ?

Jonathan Aitkin, who is 75 years old, is about to be ordained into the Anglican Church by the Bishop of London. Before his fall from grace he was a Conservative politician who. when he was 57 in 1999, was sent to prison for 18 months, after being found guilty of committing perjury after lying on oath in a libel case against 'The Guardian'. He has since  described persuading his then teenage daughter Victoria to give him a false alibi as his “most shameful mistake”. He also lied about who paid for his £1,000 hotel bill at the Ritz in Paris.

Jonathan's early life had been one of privilege. Born in 1942, in Dublin during the Second World War, the son of  Peneloep, the daughter of the First Baron Rugby and William who was Conservative MP for Bury St Edmunds during Jonathan's early life and until he was 21. Four years before he was born his Grandfather was the first British representative to the newly independent Irish state, at a time when Anglo-Irish relations were strained but improving. As a result, the Taoiseach of the new Republic, Éamon de Valera attended Jonathan's christening at St Patrick's Cathedral in Dublin, along with his Godmother Princess Juliana of the Netherlands.

It was not to last and the blight on his childhood came in the shape of tuberculosis, which he contracted when he was 4 years old and led to him spending the next 3 years as an inpatient on a TB ward where he was cared for and educated by Catholic nuns. Even on discharge, when he joined his parents at Halesworth in Suffolk he couldn't walk properly.

From the age of 7 onwards he followed the well-worn path of upper class privilege : educated at Eton College followed by life as undergraduate studying law at Christ Church, Oxford in the early 1960s. Then, like his father before him, he went into journalism. He served as a war correspondent in the Vietnam and Biafran conflicts and gained a reputation for risk-taking, which might have been an augur of things to come. When he took LSD in 1966,as an experiment for an article in the London Evening Standard, he had a bad trip and concluded : "this drug needs police, the Home Office and a dictator to stamp it out."

Television followed and his was the first face to be seen on screen from Yorkshire Television when it began broadcasting when he was 26 in 1968.

His first foray into politics led to his defeat as the Conservative candidate for Meriden in 1966, which was followed by success 8 years later, when he was elected as MP for Thanet East in the 1974 General Election. He languished on the backbenches during Margaret Thatcher's Premiership, possibly because he managed to offend her by ending his relationship with her daughter, Carol, and suggesting to an Egyptian newspaper that Thatcher "probably thinks Sinai is the plural of Sinus."

His star rose when he became 'Minister of State for Defence Procurement' under Prime Minister, John Major, in 1992 and entered the Cabinet as 'Chief Secretary to the Treasury' in 1994, only to see his career go onto the rocks the following year following the allegations that he had violated ministerial rules.

In that year 'The Guardian' carried a front-page report on his dealings with leading Saudi arms dealers. The story was the result of a long investigation carried out by journalists from the newspaper and from Granada Television's 'World in Action' programme. At a a press conference at the Conservative Party Offices in Smith Square, London, at 5 p.m. that same day he denounced the claims and demanded that the World in Action documentary, which was due to be screened three hours later, withdraw them. He said :

"If it falls to me to start a fight to cut out the cancer of bent and twisted journalism in our country with the simple sword of truth and the trusty shield of British fair play, so be it. I am ready for the fight. The fight against falsehood and those who peddle it. My fight begins today. Thank you and good afternoon."

Although he was defeated in the 1997 General Election which brought Tony Blair and New Labour to power, within a year he had been appointed as a representative for the arms company GEC-Marcon. In reality, however, his attempt to clear his name began to unravel over the issue of his violation of ministerial rules by allowing an Arab businessman to pay for his stay in the Paris Ritz Hotel.

The libel case collapsed and World in Action broadcast a special edition, which echoed Aitken's "sword of truth" speech. It was entitled 'The Dagger of Deceit'. More importantly, he was charged with perjury and perverting the course of justice and, after pleading guilty in 1999 to both offences, was jailed for 18 months. 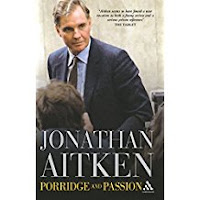 It was now that he began to study the Bible, learned Greek and became part of a prayer group which included, in his words : "an armed robber, a blower (someone who cracks safes), a kiter (a cheque forger), a couple of murderers and a dipper (a pickpocket)."

On release from prison enrolled as a student of Christian Theology at Wycliffe Hall, Oxford and covered this part of his life in two autobiographical works : 'Pride and Perjury' and 'Porridge and Passion.'

The Guardian remained sceptical about Jonathan's contrition and might have insisted that he demonstrate the sincerity of his repentance by repaying the legal bill of one-and-half-million pounds he landed on it by his dishonest libel action. In fact, he was allowed to drop the case on promising to pay costs, but then escaped from the liability when he declared himself bankrupt and revealed that most of his apparent assets turn out to be 'conveniently' owned by other people.

In early 2004, some constituency party members in his former seat of South Thanet proposed that he should return as Conservative candidate in the 2005 General Election, but this was scuppered by Conservative Party leader Michael Howard. Jonathan confirmed that he would not attempt a return to Parliament, saying that : "The leader has spoken. I accept his judgement with good grace."

As further evidence of his spirituality, he published : 'Prayers for People under Pressure' in 2006 and wrote a biography of the English slaver and Anglican clergyman John Newton entitled : 'John Newton: From Disgrace to Amazing Grace' in 2007.

After “being given the sacred trust” Jonathan now plans to work as an unpaid prison chaplain for three or four days a week, mostly in jails around London and has described the step as a “life-changer” and  “I’m every bit as excited as I was on my first day on the East Anglian Daily Times as the assistant tennis and funerals correspondent.”

Graham Tomlin, Bishop of Kensington said :  "I have known Jonathan Aitken for several years and this is a calling that has grown within him and been tried and tested by many others. His experience of the prison system, both from the inside and the outside gives him a unique perspective to offer Christian ministry in this vital area of our life as a society. He brings Christian learning from his theological studies, wide life experience, knowledge of the wider issues in criminal justice and a pastoral understanding of the needs of prisoners that will help strengthen the church’s ministry to all."

In 2015 Jonathan said : "Power is a drug. Power gives delusions and one of those delusions is that you can walk on water and that the normal rules don't apply to you and you can get away with it."