Dad's Army was, and is, a much-loved BBC television sitcom about the British Home Guard during the Second World War which ran from for nine series over 80 episodes for 11 years from 1968 to 1977 and regularly gained an audience of 18 million viewers. Its brilliant script writers, Jimmy Perry and David Croft, created a semi-credible squad of seven soldiers and attached a catch phrase to each one.

Now, tongue in cheek and complete with catch phrases, the Royal Mail, at the point of Britain's manifest confusion over Brexit, has issued a set of stamps to commemorate the show's 50th anniversary. Welsh MP Jonathan Edwards wrote : "Brilliant timing by Royal Mail to issue these Dad's Army stamps considering what we are debating over the next two days in the House of Commons." With further irony, Britain finds that, like Brexit, the actors, were not quite what they seemed to be. 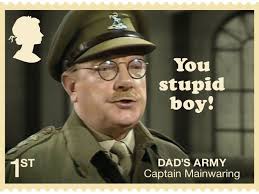 Arthur Lowe played the leader of the troop, Captain Mainwaring. In the five years after the last episode of the series and before his death at the age of 66 in 1982, his alcoholism got worse and he was reduced to acting in pantomimes and touring theatre productions, sometimes passing out on stage or at dinner. A heavy smoker whose weight had ballooned, he was stricken by a fatal stroke in his dressing room at the Alexandra Theatre, Birmingham, before a performance of 'Home at Seven.' "You stupid boy" originated from that moment when Jimmy Perry told his father he wanted to make his way in the theatre. 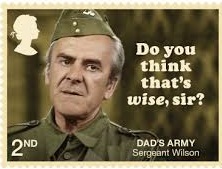 John Le Mesurier, who died the year after Arthur, at the age of 71 and played Sergeant Wilson, was also a heavy drinker, although never noticeably drunk. In the year the series ended he collapsed in Australia and flew home, where he was diagnosed with cirrhosis of the liver and ordered to stop drinking and accepted that "it was the cumulative effect over the years that had done the damage." In his last 6 years he avoided spirits and drank only beer and smoked cannabis in those spells of  abstinence from alcohol. 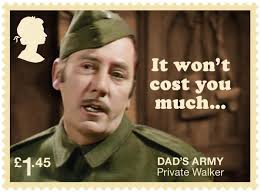 James Beck had played Private Walker over six series, when he died at the age of 44 in 1973, suffering from pancreatitis which is invariably caused by alcoholism. Jimmy Perry commented that heavy drinking was common in show business at the time and that he paid little attention to his  habit until : "I saw Jimmy’s legs and they were purple. It was the last episode he appeared in before he died." 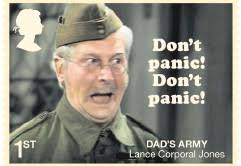 Clive Dunn, who played Lance Corporal Jack Jones, and is immortalised with "Don't panic", was the second youngest member of the cast when he played the role of its oldest member, whose military service in earlier wars with General Kitchener made him the most experienced member of the Walmington-on-Sea Home Guard. Not known to the public was the fact that his staunch socialist beliefs often caused him to fall out with Arthur Lowe, who was an active Conservative and when Clive was appointed an OBE in 1975, it was reported that Arthur would only accept a higher-rated honour from the Queen. He died six years ago at the age of 92. 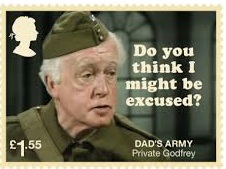 Arthur Ridley was 72 when he first played the prostate-prone, ancient Private Godfrey and was perhaps the the most surprising member of the team. Born in 1896, he served as a captain in the Army during First World War, where he was riddled with shrapnel, bayoneted and hit on the head by a German soldier's rifle butt and then medically discharged in 1916. He then went into acting and distinguished himself both  in repertory theatre and also as a the writer of 30 plays, including 'The Ghost Train' in 1923. In the Second World War he actually served in the Home Guard in his home town of Caterham. He died at the age of 88 in 1984.

John Laurie, who played Private Frazer, died 3 years after the last episode of the Series in 1980 at the age of 83 and was the least happy member of the team. As a young stage actor in the 1920s and 30s he had played prized Shakespearean leads, including Hamlet, Richard III and Macbeth and featured in Olivier's three Shakespearean films. He couldn't quite reconcile his past with his present in Dad's Army and Ian Lavender recalled him saying : "I’ve played every part in Shakespeare, I was considered to be the finest Hamlet of the twenties and I had retired, and now I’m famous for doing this crap." Ironically it is as the chronically pessimistic Frazer epitomized in "We're doomed. Doomed." in that "crap" that he will always be remembered. 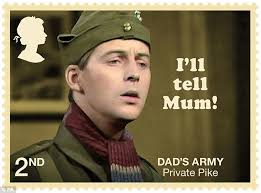 Ian Lavender, who is the only member of the team who is still alive at 72, first played Private Pike at the age of 22 and served his apprenticeship as an actor among the old hands in the cast. After the end of the last series he enjoyed a stage, tv, film and radio career interrupted by his operation for bladder cancer in 1993 and heart attack in 2004. When he appeared in 'Celebrity Mastermind' on BBC One in 1968, when presenter John Humphrys asked his name, fellow contestant Rick Wakeman shouted "Don't tell him, Pike!", in a reference to Captain Mainwaring's most famous line from Dad's Army. 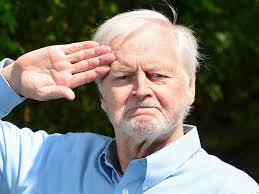