Apparently, the 97 year old Prince Philip is a familiar figure driving in the Monarch's, private 20,000 acre, Sandringham Estate in Norfolk. One tenant, who wanted to remain anonymous said : "The man’s notorious, he drove around and you had to get out of the way. On two occasions he pulled out from a side road. Once, he pulled out at a junction to my left – I had to steer right and step on the brakes. He just came out on a bend. On another occasion at crossroads he came straight across the junction. He’s 97, with a range of medical complaints, and drives as if he’s the only one on the road. If you saw him, you’d get ready to get out of the way.”

Last week the Prince, escaped unhurt after the car he was driving was involved in a crash on a public road close to Sandringham. Police were called to the scene of a collision and witnesses told the BBC that his landrover had overturned after pulling out from a junction on the A149. Roy Warne, a 75 yer old barrister, who was one of the first on the scene said there was “one elderly man inside, lying on his side with his legs in the footwell" and he only realised it was Philip as he manoeuvred him out of the wreckage. He said he was able to stand up and was unharmed “but was obviously very shocked”. 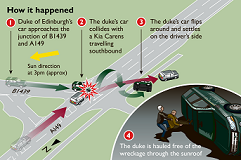 According to witnesses, his Land Rover collided with the Kia after he pulled out on to the main road. Its female driver and passenger were treated in hospital and later discharged. There was also a baby in the back of the car at the time of the accident. Norfolk police said : “The female driver of the Kia suffered cuts while the female passenger sustained an arm injury, both requiring hospital treatment.”

A Norfolk police spokesperson said : “As is standard procedure with injury collisions, the incident will be investigated and any appropriate action taken. We are aware of the public interest in this case, however, as with any other investigation it would be inappropriate to speculate on the causes of the collision until an investigation is carried out.”

On television, the BBC and ITV both made the accident the main item on their evening news, with the BBC spending at least 10 minutes on the story. In addition, the Archbishop of York, John Sentamu, shared a message of support for the Prince  when he prayed : ' Almighty God, the Fountain of all Goodness,We humbly beseech thee to bless Philip Duke of Edinburgh:Endue him with thy Holy Spirit; enrich him with thy Heavenly Grace; prosper him with all happiness; and bring him to thine everlasting kingdom, through Jesus Christ our Lord. Amen.'

Despite his advanced age, Philip has not shown any inclination to give up driving despite his advanced years and was photographed behind the wheel at the age of 95, driving the then US president, Barack Obama, and the first lady, Michelle Obama, on their visit to Windsor in 2016.

Philip is no stranger to road accidents. When he was a mere 75 years old, back in 1996, Norfolk businessman Patrick Daynes ended up up in neck brace and with whiplash injuries in after the Prince steered his Land Rover into the back of his Mercedes 190 as he let an elderly lady across a zebra crossing.

He was 18 years old in 1939 when he took he took his driving test, if indeed, he ever did. It was the year he joined the Royal Navy at the outbreak of the Second World War. He was 79 years younger and there were then less than 4 million cars on the road, whereas today it is over 31 million. https://www.youtube.com/watch?v=eL0S8iUT7xQ

Inevitably a car accident of one old, high profile Prince raises questions about the fitness of all old men and women on public roads. Not unsurprisingly safety campaigners have renewed calls for eyesight and medical tests for old drivers, despite the fact that motoring organisations said young male drivers pose more risk than older ones.

The road safety charity, 'Brake', said checkups should be compulsory. Currently, British drivers have to reapply for their licence at the age of 70, and every three years thereafter, by self-certifying their sight is good enough to read a number plate at 20 metres, and that they have no medical condition that prevents them from driving. Currently, more than 4.5 million of the 39 million people holding valid driving licences in Britain are aged over 70.

Joshua Harris, the 'Director of Campaigns' at 'Brake' said : “With our ageing population it becomes ever more essential to have robust procedures in place that ensure older drivers are not inadvertently putting themselves and others at risk. Fitness to drive regulation should be strengthened with compulsory eyesight testing throughout your driving career, regular health checks for older drivers and greater communication between the DVLA and the medical profession.” He said older drivers should visit their GP to have sight and hearing tests every year to check they were fit to continue, and not “put lives on the line when they get behind the wheel”.

The Prince, however, was defended by the Automobile Association. Edmund King, the President of the AA, said : “We wish the Duke of Edinburgh well. Many commentators use high-profile car crashes involving elderly drivers as a reason to call for bans or restrictions on older drivers. If driving restrictions based on age and safety were introduced we would be more likely to restrict young drivers rather than older drivers.”

The Prince is one of that small group of  nearly 12,000 very old drivers, over the age of 95 and mostly men, who still dive, including 314 centenarians with the oldest at 107.

Edmund King also said : “Young, predominantly male, drivers are much more likely to crash within six months of passing their test than older drivers within six months of hanging up their keys. The decision to hang up your keys is a tough one but should be based on personal advice from your GP and family rather than being based on some arbitrary age. We all age differently and the car is an essential lifeline for many elderly people.” 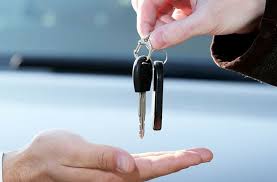 Labels: Prince Philip on the road