It is difficult not to agree with David Milliband, who said in the Guardian four days ago : 'I am convinced that Brexit is the biggest foreign policy disaster since appeasement in the 1930s.'  David, who is 54 years old and served as Foreign Secretary in Gordon Brown's Labour Government from 2007-10 has, unlike most members of the present Johnson-led Government, a razor sharp intellect, having been the third youngest Foreign Minister in history who studied at Corpus Christi College, Oxford where he obtained a first-class honours degree in Philosophy, Politics and Economics.

Many millions of British men and women and among them hundreds of thousands of old men, remain unreconciled to Britain's exit from the European Union next month and implacably opposed to Britain's divorce from Europe. For those old men born either before, during or shortly after the Second World War, who played on bombsites of houses in cities in the 1950s, where, just ten years before, German bombs had killed civilians in The Blitz and had listened to fathers, elder brothers and uncles recall their Wartime experiences at family get togethers on sunday afternoons, there will be no reconciliation to the idea that we must all get behind Brexit now. Even as small boys, they could see how these men had all been deeply affected by their War, having fought either in North Africa and Italy, Northern Europe or South-East Asia.

Even the Queen, in her Christmas Message made on television yesterday was urging all Brits to put their differences about Brexit behind them and work together when she said : 'By being willing to put past differences behind us and move forward together, we honour the freedom and democracy once won for us at so great a cost.'  In fact, the reverse is the case : those who remain opposed to Brexit, hold steady in their beliefs and thus honour their freedom and democracy.

When she referred to Britain's triumph in the Second World War when went back 75 years to the time before many old men were born and D-Day in 1944 when she said said : "For the Seventy-Fifth Anniversary of that decisive battle, in a true spirit of reconciliation, those who had formerly been sworn enemies came together in friendly commemorations either side of the Channel, putting past differences behind them." Did she not see the irony of the situation, in that the old enemies, with whom we had reconciled differences, were about to become, once again, our rivals in a post-Brexit world ?

She used the experience of the War to argue that post-Brexit, we should all come together as one nation : "Such reconciliation seldom happens overnight. It takes patience and time to rebuild trust, and progress often comes through small steps. Since the end of the Second World War, many charities, groups and organisations have worked to promote peace and unity around the world, bringing together those who have been on opposing sides." 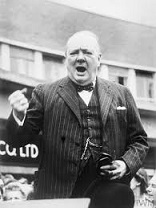 "You cannot tell from appearances how things will go. Sometimes imagination makes things out far worse than they are; yet without imagination not much can be done. Those people who are imaginative see many more dangers than perhaps exist; certainly many more than will happen; but then they must also pray to be given that extra courage to carry this far-reaching imagination. But for everyone, surely, what we have gone through in this period -  this is the lesson: never give in, never give in, never, never, never, never-in nothing, great or small, large or petty - never give in except to convictions of honour and good sense. Never yield to force; never yield to the apparently overwhelming might of the enemy."

Labels: Opposed to exit from Europe