According to NHS Digital, the number of old men and women in Britain diagnosed with malnutrition has more than trebled to almost 500,000 in the past decade and more than a million aged 60 and over, that is one in ten, are either malnourished or at risk of malnutrition.

These are the lucky ones who have been diagnosed by a either doctor or other health professional.The fact is that, more than a million aged 60 and over - more than one in ten - are either malnourished or at risk of malnutrition and many are undiagnosed and because the vast majority of these, 93%, live at home and their malnourishment often goes unnoticed.

The Malnutrition Task Force, an independent organisation set up in 2012 by Dianne Jeffrey to combat preventable and avoidable malnutrition and dehydration among old people in Britain, has said that Christmas is an ideal opportunity to spot the signs that old people might be struggling to eat enough to keep themselves well.

Diane, who chairs the MTF said : “It is shocking that 1.3 million older people suffer from or are at risk of malnutrition in our country and the root of the problem doesn’t just lie with poverty. There are other contributing factors which add to the risk. Public health messages that don’t always relate to this age group; a lack of ability to shop, eat and drink at home without help. As well as loneliness and isolation, grief and bereavement, poor physical and mental health or a lack of awareness of the risks by health and social care staff.”

One 'contributing factor' identified by the 'English Longitudinal Study of Ageing', was the fact that over 230,000 old men and women  aged 75 and over having difficulty with the physicality of eating, such as cutting up food and opening jars and over 1.9 million have difficulty eating food because of a dental condition.

The Study also identified not being able to afford to eat as another cause of malnutrition, particularly for those old men and women  people living in poverty and showed that over 29,000 of 65-74 year-olds admit having to cut or skip meals because they didn’t have enough money.

Lesley Carter, Clinical Lead for MTF, said too many old people and, in particular, women were failing to adjust their diet as they aged. She said : “We’re seeing this all the time. A lot of women have been dieting on and off all their life, or at least they've been very conscious of what they eat, and even as they become elderly they’re still chomping on the salads. Often that’s not the correct diet for someone who is ageing. They need to be trying to eat a lot more protein.”

Diane highlighted the opportunity to spot malnutrition at Christmas : “It is sometimes quite difficult to recognise that you or a loved one is unintentionally losing weight. At Christmas look out for warning signs like rings being loose and slipping off, clothes looking too big, belts needing to be tightened. Look for dental problems, loose teeth, sore mouth or loose dentures. All will make chewing and swallowing difficult or some may just have a small or general lack of appetite.”

All of this is well and good, but a new Age UK report estimates that around 200,000 old men and women aged 65 and over will spend the Christmas alone this year.

Caroline Abrahams, Charity Director of Age UK said that : “Increasing numbers of people diagnosed with malnutrition is a cause for concern because poor nutrition can be both a cause and consequence of ill health. Signs will often go unnoticed until they have made a negative impact on health and well being. Malnourishment can cause long-term health problems for otherwise healthy and independent older people. It can also mean more visits to the GP, increased chances of being admitted to hospital and longer recovery times from illness.". 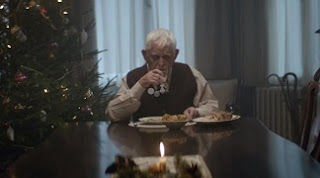